by Spirit of Eureka – Victoria

This article was a leaflet distributed in support of weekend workers 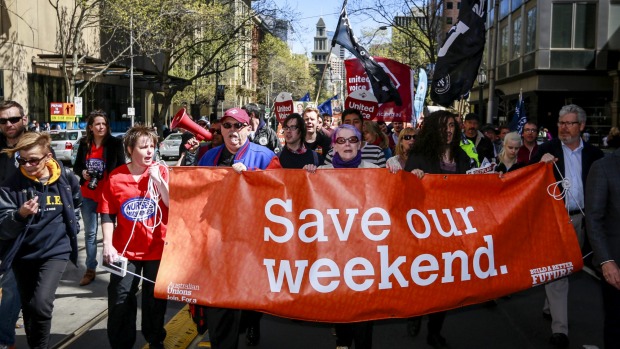 Workers’ penalty rates today have been won by past generations of workers and unionists after long, hard and bitter struggles. They are part of our livelihood, our way of life and must be vigorously defended.

Millions of workers and their families rely on penalty rates to pay for rent/mortgages, education and health expenses, power bills and transport to get to and from work.

Penalties compensate for working weekends, overtime and shift work, for missing out on rest and time with family and friends.

Government is dancing to the big business’ tune

International corporations and banks demand governments around the world impose austerity on working people and communities.

They dictate the economic policies for Australia.  They use the Free Trade Agreements like the TPPA  (Trans Pacific Partnership Agreement) to impose and enforce cheap labour on all countries.

The Murdoch media monopoly, big business and the LNP government spread lies that workers’ penalties are killing small businesses.  Workers in small hospitality and retail businesses are in the front line of attacks on penalty rates.  This is a prelude to a wider assault on workers’ penalties in all other industries.

Many restaurant and cafe workers are casual or part-time young people, students or visa-holders earning miserly wages, often underpaid and/or below award, dependent on tips and weekend work to make ends meet.

Many hospitality and retail workers are not organised in unions and are subjected to abuse, harassment and intimidation.  They are a vulnerable and easy target for the LNP government as a front line attack on all workers’ penalties.

If penalties are taken away from retail and hospitality workers, this money will only end up lining the pockets of big business through higher rents and charges.