From the TPP-Unions and Community Roundtable Coalition 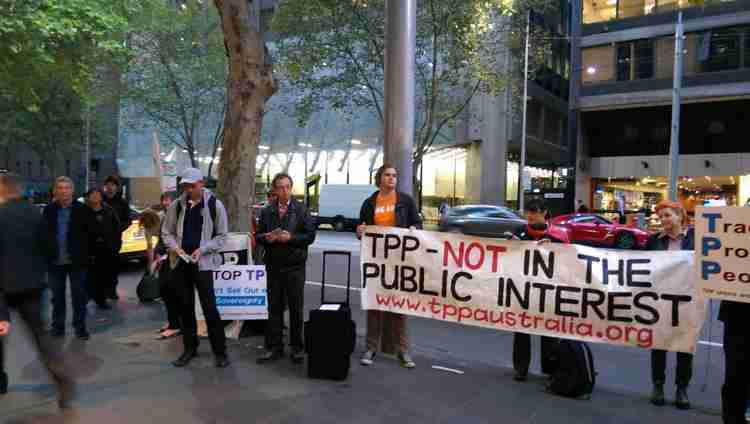 On March 23 a public rally to protest the TPP was held outside the RACV Club in Melbourne where the retiring Minister for Trade, Andrew Robb, was delivering a breakfast speech on the TPP –  how he and the government sold out Australia’s working people, the environment and little that’s left of our sovereignty, to US multinational corporations.  Andrew Robb is now vigorously working overtime for the multinational corporations lobbying the US Senate to pass the TPP.  He has been rewarded for his treachery by the same corporations and their lackeys in government, who drew up the TPP.

The rally was organised by the TPP-Unions and Community Roundtable Coalition.  The following is a report from the group on the rally outside the RACV Club and the unfolding events inside the building.

Recently, the US government revealed its intention to expand the US-driven TPP into more countries in the Asia-Pacific.  The extension and consolidation of US dominant economic power in the region, via the TPP and TISA, lines up with the recent provocative US military build up and actions in Asia-Pacific (US military Pivot into Asia-Pacific), and the increasing threat of US-instigated war. Building the movement for Australia’s independence, national sovereignty, and for working people to take control of our country, is becoming more pressing.  The movements resisting the multinationals’ TPP and calls for the removal of US military bases and troops from our soil, and for an independent foreign policy, are a part of this process.

A TPP Public Forum will be held in the Lower Melbourne Town Hall on 21st April.

TPP rally and Andrew Robb – What happened at the RACV Club, Melbourne? 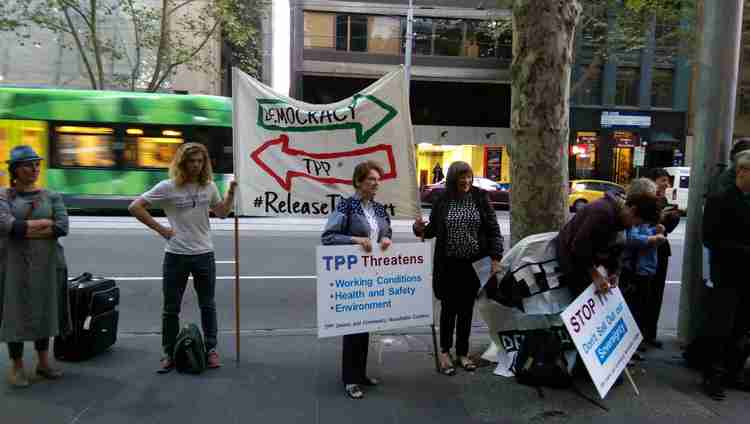 A TPP – Unions and Community Roundtable public rally was held outside the RACV Club in Melbourne on 23 March where the retiring Minister for Trade, Andrew Robb, was giving a breakfast speech on the TPP.  The event was sponsored by News Lt, Murdoch’s media monopoly.

The rally was attended by representatives from several unions, community and environment organisations, and other members of the public who had learnt about the rally from facebook pages and friends’ emails.

At the same time as the rally was taking place, an incident was unfolding inside the building that threw the spotlight on the ordinary people’s democratic rights in this country.  It demonstrated yet again that there’s democracy for the rich corporations, whilst the voices of the people are increasingly silenced. There’s “democracy” for the 1% corporate moguls, but not for the working people when we dare to question the dominant power of the multinational corporations over our lives and the environment. 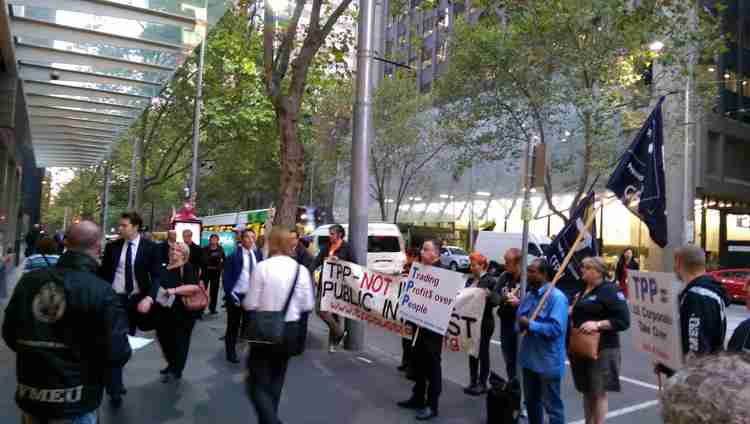 Three members of the public who had registered and paid a fee of $60 to attend the breakfast with Andrew Robb, were prevented by security guards and various branches of state and federal police and intelligence agencies, from entering the room where the event was being held.  The women’s intention was to respectfully listen to the elected parliamentary representative Andrew Robb’s arguments outlining the benefits of the TPP and put questions to him during the Q & A session at the conclusion of his talk.  The 3 women, like many others, believe it is their right that members of the public are entitled to, and parliamentary representatives have an obligation and duty to uphold these rights to members of the public, to hear and answer their questions.

The actions of the Minister and his parliamentary security officers, different branches of the police and intelligence agencies, is a sign of the corporations’ fear of the people, and importance of the TPP to them.

A video of the incident, taken by one of the three women, had mysteriously disappeared from her phone shortly after the 3 were marched out of the building by armed police.

Below is Suzie Leach’s account  of events inside the  RACV Club building before Andrew Robb delivered his address.  Suzie is one of the three brave women who went to the event to listen and politely ask questions of the Minister. 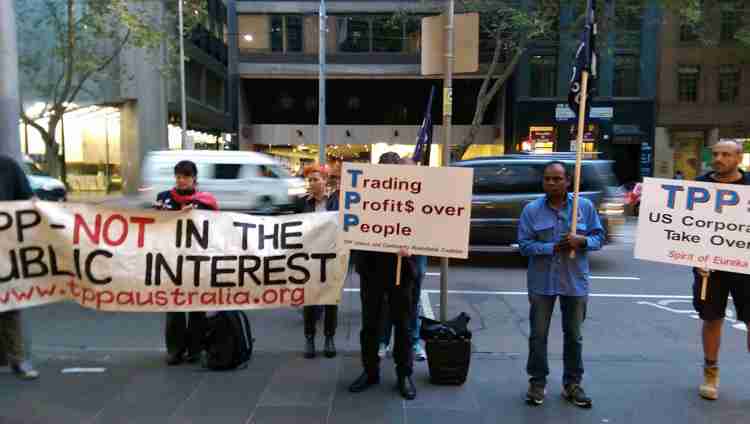 “Around 10 armed Police Officers escorted myself and two lovely ladies out of an event that we had every right to attend yesterday. We had fully paid up tickets to hear the soon to be retired Trade Minister Andrew Robb speak at a venue in the RACV city club.

This was a public event, and as there was a Q and A session, and because unlike most folk we have actually read the text of the TPP ( 6,000 pages written by corporate lawyers), clearly we had some relevant questions to ask. However this is the very last thing Mr Robb and the Newscorp lackeys who organised the event, would want.

“Right from the start we were denied entrance! Guess why? We were never able to ascertain this. Other than the word “history” was used. To the very best of my knowledge, my compatriots have no history, other than standing up for the environment and human, democratic and civil rights. Ironic really.

“This should actually instil fear and make all of us reflect on the virtual police state that we live in.

At one point the Trespass Act was invoked. Of course we were not trespassing, as we had fully paid up tickets. Right up until we were outmanoeuvred, and the quickest credit card refund in history may have occurred…I still need to confirm this.

“For anyone who is still reading, I do hope that you understand that this behaviour in a so called democracy implies there is something to fear about the TPP.

Suzie can be contacted via: