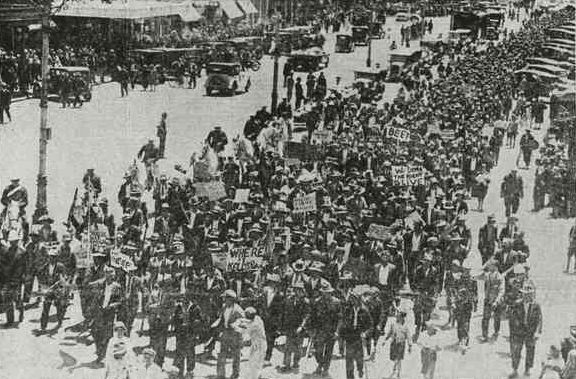 This economic analysis was given on Radio 3CR, Melbourne, 20 February

A financial crash is much more likely than not during 2016. When it strikes, it will be far greater than in 2008. The entire global economy will seize up– as almost happened in October 2008.

This morning, I won’t go back over all the reasons why the crash is on its way. For instance, I won’t consider China, (see notes for 19 September) except to say that its excess capacity in steel-making is larger than the entire steel-making capacity of Japan.

But I can’t resist going back to the June 2014 Report of the Bank for International Settlements. The BIS is the central bank for 60 of the world’s largest Central banks. It warned that governments and corporations had done no more than to postpone the day of reckoning.

What is the day of reckoning? One, it is slashing government debt levels; two, it is purging excess capacity by closing down factories. In short, it will be doing to the world what has been done to Greece. (for more on the devalorisation see notes from 12 December)

If we confine our attention to the banking sector, what do we find? Deutsche Bank is the biggest bank in Europe’s strongest economy. Last year, it posted a trading loss of $ US 7bn. All the big banks are at risk because of their loans to energy companies which are now bad debts because of the collapse of oil and gas prices.

The turmoil in the financial sector expresses itself in opposing ways according to the conditions in each nation-market-state.  Compare India with Japan. The chairman of the Central Bank of India warned that low interest rates are paving the way to the next crash by getting people to borrow more than they’ll be able to repay. A week later, the Bank of Japan imposed sub-zero interest rates after 25 years of stagnation to get people to start borrowing.

Late last year, a funds manager who had returned 20 per cent for twenty years shut up shop. The turbulence was so great that he could no longer predict price movements. The crash we’re talking about involves much more than the share-price slumps over the past few months. (see notes for 17 October)

Yet, there is a vital overlap. The excess capacity in the production and processing of raw materials has slashed the price of BHP-Billiton shares. The abandonment of coal-seam projects is also part of the purging of excess capacity.

In these cases, there is still some connection between the share-price and the capacity of the corporations to realise profits from their plundering more of the wealth of nature through the  exploitation of wage-slaves. The entire capitalist system has to fight its way back to that happy state for the boss class.
In addition, there is an indirect connection between excess capacity and stock-market turbulence. This cross-over is not confined to stock markets

It extends to the foreign exchange markets, as well as to the markets for physical goods, such as food – and onto the futures markets for the lot.
Why is all this surplus capital sloshing around? Because there haven’t been enough investments to return the average rate of profit from the exploiting of labour.

Seeing the perfect storm coming, what should we do? I’d like to suggest that we take a lesson from a manual worker comrade. Jim Sharp spent a lifetime as an industrial butcher. He observed blokes striving to be the gun-boner – that is, the best on the cutting-up floor. Some thought that the way to the top was by becoming the strongest. Then, they could wield their knives with more force than everyone else.  But Jim learnt that sheer muscle power was secondary. What made you a gun-boner was how well you could sharpen your knives. The skill was not only on the carcass but at the grinder.

We need to apply that insight to our political work. Yes, it’s important for the working class to be organized. We have to be strong to resist the power of the capitalist state standing behind the might of global corporates. But we also need to know how to sharpen our intellectual tools. Marx’s Capital is the whetstone on which to sharpen our weapons for the class war.
Too often, people around the left think they’re being Marxists when they parrot a line about changing the world rather than interpreting it. That’s not the choice. Our movement cannot privilege mindless activism above action-directed study. Marx divided his time between organising the working-class and writing the four-and-half thousand printed pages of Das Kapital.

That fact of life brings us up against the hard question:
how can we use Capital to interpret what is happening to global capital today? To put that question the other way around: what follows if we don’t improve our understanding of how capitalism operates? The answer is that we are left with nothing to say beyond putting a progressive spin on the spin from the paid liars.

In case you’re wondering who they might be – they are the professors of economics and the fund managers feted on the ABC. We are all struggling to keep our noses above a supersaturated solution of bourgeois bullshit.
How are we to use Capital  to understand the looming crisis? Lots of people around the Left have heard that Marx provides an explanation for why capitalism implodes. It’s something called ‘the falling rate of profit’. That ‘Open Sesame’ is in volume three.

In the time we have today, it’s not possible even to outline what Marx has to tell in those sixty pages. Moreover, those three chapters are far from the be-all and-end-all of his crisis theory. During the year, we’ll introduce some of its other elements.

Meanwhile, the pages on the falling rate of profit will make no sense unless we understand one more of Marx’s discoveries: which is how ‘capital’ develops by replacing living labour with dead labour, that is, with machinery.

(for definitions of ‘constant’ and ‘variable’, ‘fixed’ and ‘circulating’ capitals see my ‘Re-fining Capital’ on www.surplsu-value.org.au under Marxism.)

In the time available, we can concentrate on the words in the chapter title.

The first point is that the chapter is NOT called ‘The Falling Rate of Profit’.

The title is much longer and more complicated. It reads:

The law of the tendency of the rate of profit to fall.

We need to pay attention to the first part:

The LAW of the TENDENCY of

Those words are all too often left out, even among Marxists.

For Marx, the rate of profit is falling almost all of the time. But that persistent decline does not spark a crisis in the total system. The Big Crash comes when the mass of profit shrinks, and not just because an endless fall in the rate.

The Law is ‘tendential’, that is, it breaks through to the surface only ‘other things being equal’ – which they almost never are. Indeed, Marx calls his next chapter ‘Counteracting Factors’. Hence, the Law is NOT an absolute in each and every situation.

( for a elaboration see Michael Lebowitz, ‘LTRPF – A Dialectical View’, on the www.surplusvalue.org.au site in the folder ‘Marxism’)

Now let’s look into the second half of the chapter title:

the RATE of PROFIT

There are two aspects here: ‘rate’ and ‘profit’. A rate is arrived at as a fraction of the total volume.
That means doing ‘sums’. The majority of us who are maths-averse need not be scared off. We are being asked only to follow a few fractions and percentages. It’s no harder than lower secondary level. There’s no algebra. What looks like algebraic equations are just abbreviations:

s over v, for example,

where ‘s’ is shorthand for surplus value and ‘v’ for variable capital.
Two: the fall is in the rate of profit not in the rate of surplus-value. Surplus-value is what employers extract from us as wage-slaves. It’s no use to them until the commodities in which it is present have been sold. Only then does some of the surplus-value flow back to the employing capitalists as profit.

The argument is dense because capitalism is itself a thicket. We need to read with pen in hand. Read slowly, paragraph by paragraph. Find someone to talk through the pages after you‘ve both studied them.

Before we close, there are three points to add.

The first is that when an economy blows, everything else gets worse. So, if your primary political interest is either Gonski or refugees, a global implosion must make the desired outcomes harder to achieve. Hence, making the effort to understand the coming crash is not an option.

The second point is that crises are good for capitalism as a system. They are the way capitalism breaks through to its next phase of expansion based on exploitation.

The third and final point is of a different order. ‘The Law of the tendential fall in the rate of profit’ arises only within the capitalist system. It arises from capital’s need to go on expanding through its exploiting labour. Marx does more than show why capitalism is prone to crises. His larger conclusion is that only a different mode of production can eliminate that burden on working people. The entire economy and society would be organised differently. It would serve – in Marx’s words –

And that’s communism for you, comrades.