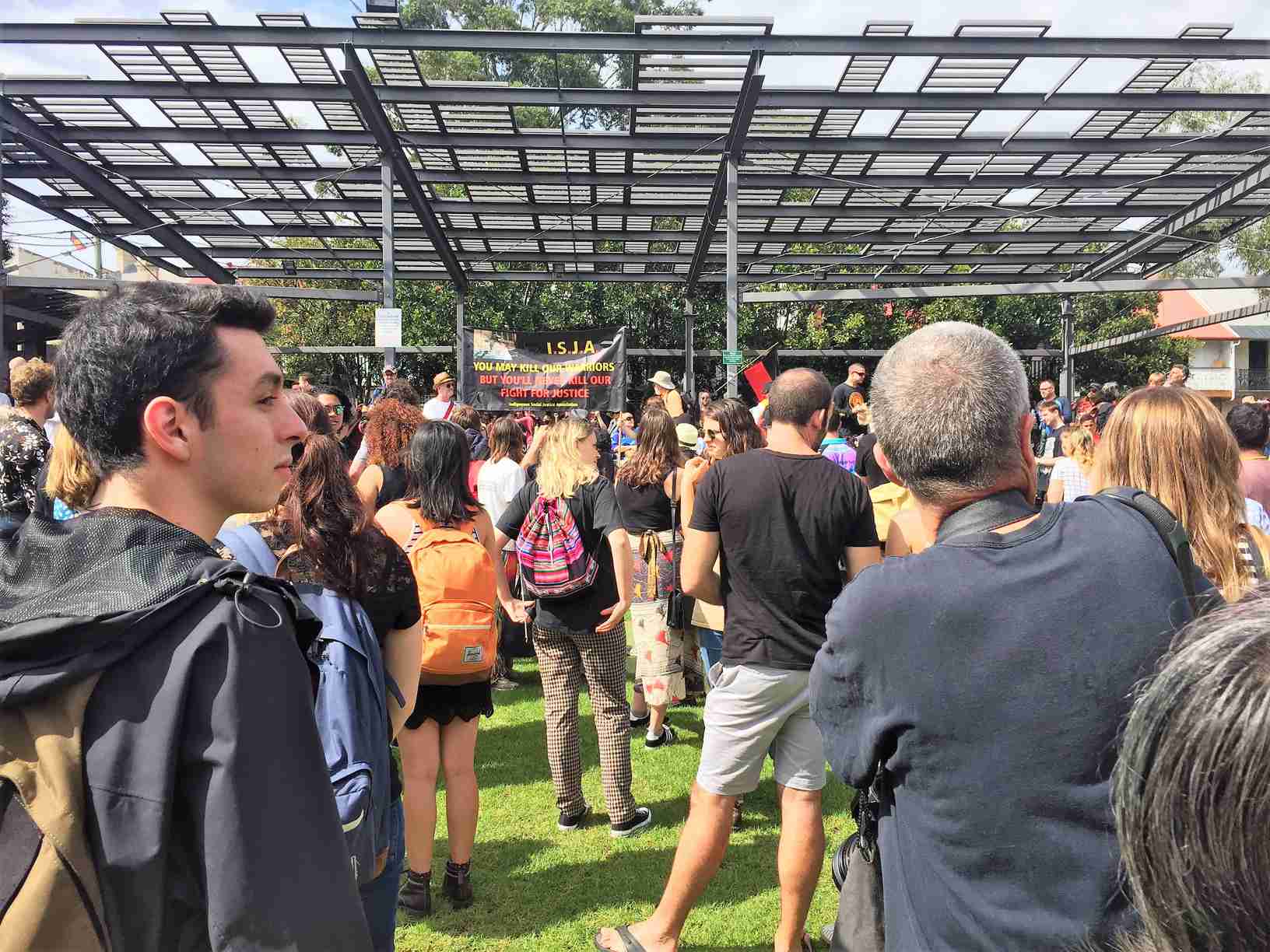 At 10am, 26 January 2016, at “The Block”, Redfern, thousands of demonstrators massed to commemorate Aboriginal survival and to call for recognition of the First Nations’ sovereignty and for genuine treaties.  The Aboriginal Nations survived despite the invasion by British Colonialism of the First Nations’ sovereign land, despite “Terra Nullius”, despite the genocide through murder, war and British-imported diseases, despite the Government’s policies of assimilation and separation, and despite the Stolen Generation, Black Deaths in Custody and the Intervention.

Small wonder that the day is known as “Invasion Day” by many thousands of Aboriginal and Torres Strait Islander people and their supporters. However, Channel NITV chose “Survival Day” to refer to 26 January, making the important point that “Survival Day… recognises the invasion and our history, but invasion doesn’t frame us as a people. We are still here, our languages are still spoken and our culture is strong.”

The Invasion Day rally was organised by a number of indigenous associations, including the Indigenous Social Justice Association (ISJA), the Redfern Aboriginal Tent Embassy (RATE), and the Woomera Sovereign Rights Union (WSRU). The WSRU on their website invites all to join in the fight for the rights of the Sovereign peoples of this land, and displays a banner “Towards a republic for all” featuring the Aboriginal and Eureka flags criss-crossed.

One of the rally’s leaders, Ken Canning (from ISJA) acknowledged the Gadigal people of the Eora nation as the traditional custodians of the land on which the rally took place.  This is “the first impact of two-hundred and twenty-eight years ago today, the first impact by the British Colonialists that declared war… imported foreign sicknesses that killed our people and also imported moral decline that ruined our family structures. They imported a lot of things that were the breakdown of our lives” he said in his speech at the Block. “…You’re starting on a journey to learn the true history of the country you were born in… Today is about mourning–we must mourn our dead. Today is also about pride–the people who fought, generation after generation after generation, fought in every tribal land… fought spears against guns, fought bravely, fought with honour… and right up to more modern times, today is about remembering our heroes… Today marks a day when we stand in solidarity and mark respect.”

Later, at the Town Hall, Ken Canning said Indigenous sovereignty has never been ceded and that January 26 is a day of invasion to Indigenous Australians. He said Indigenous communities need to be provided with autonomy and self-governance, separate from the Australian parliament.

An organizer from the WSRU introduced a young indigenous activist & poet, Elizabeth Jarrett.  She first made a short fiery speech asking everyone present to ponder on what the day really means. “It’s no celebration. It’s a commemoration. May we all remember the first frontier, the first war of this country they call ‘the lucky country’.  The great Australia is a stolen land. This land is built on terrorism, lies, murder and theft. And let us all never forget that. And now may I ask for TJ’s remembrance on remembrance day… a moment of silence, please.” (The reference being to 17-year-old Indigenous Australian, TJ Hickey. Witnesses and two Aboriginal Liaison Officers saw his bike, clipped by a chasing police car, propelled onto a 2.5-metre-high fence where he was impaled near a block of units off Phillip Street, Waterloo and died in hospital the next day. Calls have been made to reopen the coronial inquest but the NSW Government has refused to do so.)

After this, she recited her poem  written for the occasion:

So, today is Australia’s day of celebration

Celebrating cultural genocide and many machinations

Our strong warriors murdered, and mutilations

Our stronger women raped, and molestations

Our strongest bond of family drawn by separation

All in the name of what? The better white man? Their way of help and education?

Resulting in them of stolen, kidnapped, and now us lost generation.

So what exactly does it say about our great nation?

Forget the past and all of our government abominations?

Maybe if they could respect, and change the date

Then maybe there’s a chance we can reconciliate.

Excuse and respect why I will never celebrate. 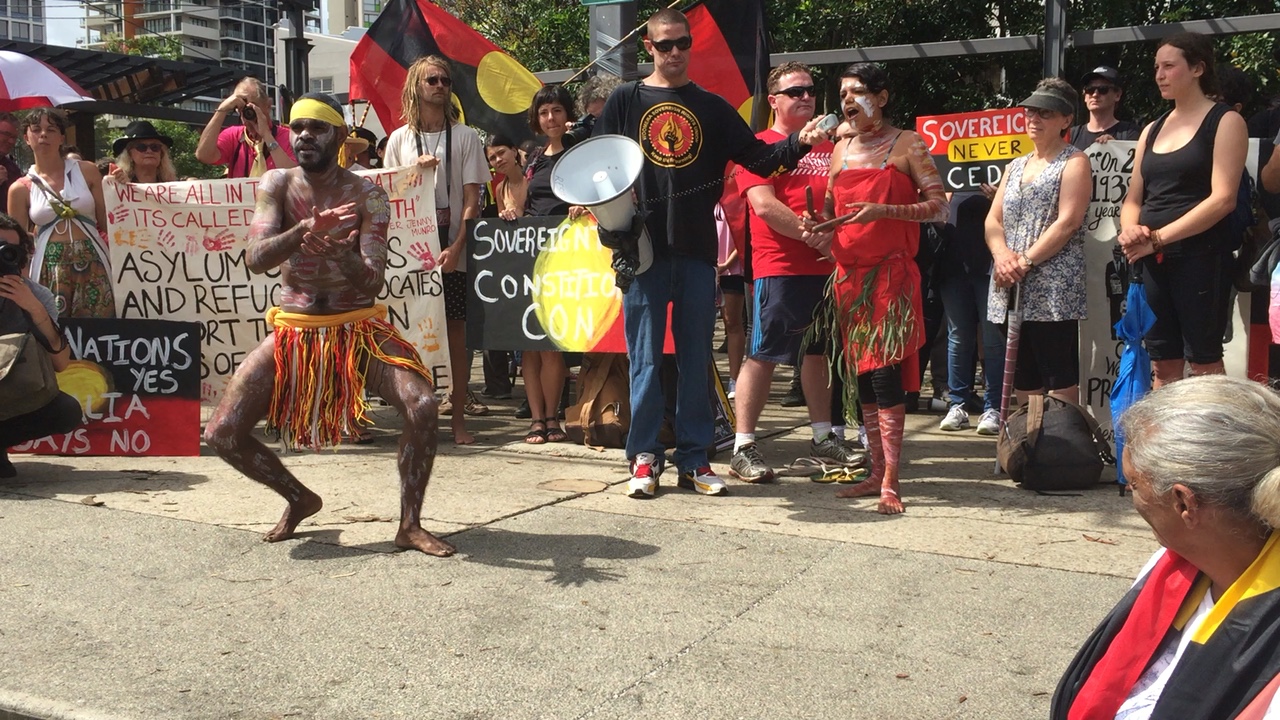 After that, the First Nations’ Welcome Dance  and Willie Wagtail dance were performed before the rally audience at The Block.

One of the founding grandmothers of RATE, Wiradjuri warrior, Jenny Munro demanded indigenous people be given the right to express their own culture and law. “The sanctity of our families must be honoured and our children will not be taken away… We have the right to practice our own religion, to speak and educate our children in our own language, the right to live our culture. The land is our mother”, she said.

Jenny Munro and the Redfern Aboriginal Tent Embassy put up a massive struggle for 15 months protesting the Aboriginal Housing Company’s plans for a major commercial & residential development, and demanding the securing of low-income housing for Aboriginal and Torres Strait Islander people on the Block with the eventual result that $5 million in Federal funding will be put towards developing this, as guaranteed by the Indigenous Affairs minister, Nigel Scullion.

THE MARCH TO SYDNEY TOWN HALL

After the rally at the Block, the demonstrators in their thousands took to the streets with many banners and slogans such as “National Day of Mourning, 26th January”, “Always was, always will be Aboriginal land”, “You may kill our warriors, but you will never kill our fight for justice”, “Respect our Elders” on a painted Aboriginal flag, “No Justice on Stolen Land”, “Justice Now! Reopen the T J Hickey case”, “Freedom for all Aboriginal prisoners”, “White Australia has a Black history”, “No pride in Genocide”, “Sovereignty never ceded” and our banner “Sovereignty and genuine Treaties for First Nations”. 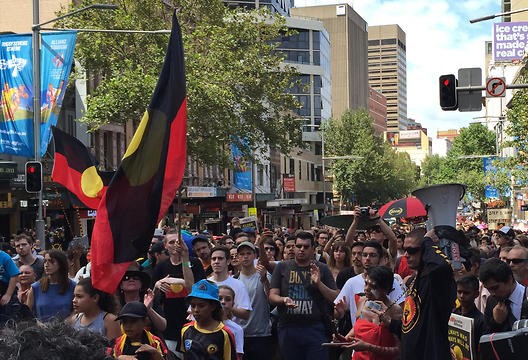 Marchers chanted “Always was, always will be Aboriginal land” and stopped at various points on the way to regroup and hear further rallying short speeches.

From the Town Hall, I went to a Survival Day fair at Victoria Park, next to Sydney University. The park was chock-a-block with stalls celebrating Aboriginal and Torres Strait Islander culture and merchandise, as well as stalls from supporting organisations including a government-supported stall providing free orange & banana pieces, and a massive playground balloon for the kids. Thousands of indigenous families and friends and their non-indigenous supporters were strolling through the park, playing with their kids, reading the literature, eating the food, chatting to the stall staff and buying the goods on display.

I bought an interesting anthology titled “The Intervention”, and some Aboriginal designed and manufactured tee-shirts for myself and my partner’s son, and even got a free material frisbee with the slogan “Our mob needs Gonski funding” around an Aboriginal design promoting the igiveagonski.com.au website.

Despite the British imperial genocide of these earlier years, despite the Stolen Generation and deaths in custody, and despite the patronizing paternalism and control by today’s Government over indigenous lives, such as is evidenced in the wholesale destruction of ATSIC rather than improving it, and the 2007 Intervention—despite all this, the First Nations have survived.

This is shown in the indigenous stalls–a positive display of the skill, culture and enterprise of the First Nations’ peoples.

Clearly, there is room for both approaches to Invasion Day or Survival Day!