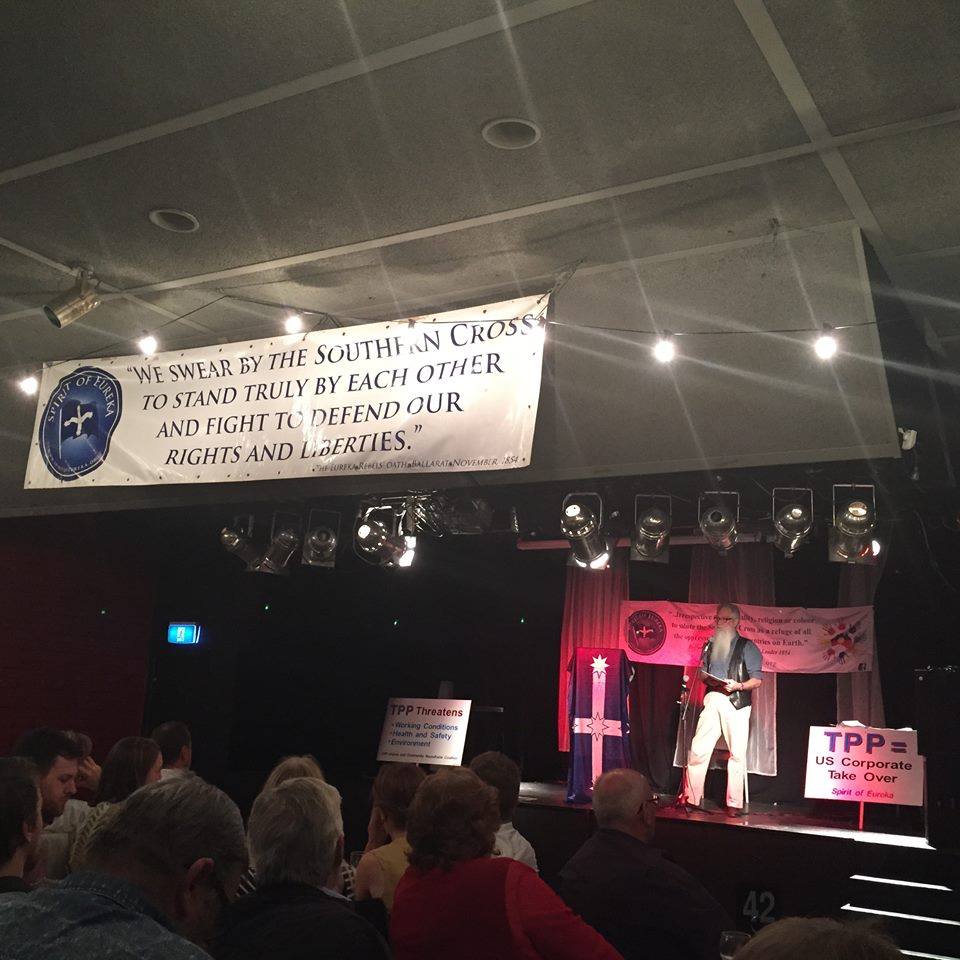 Thank you for coming tonight to celebrate and pay tribute to one of the most significant events in the history of Australia’s working people’s struggles for justice, democratic rights and independence.  The Eureka Stockade is an enduring and inspiring legacy of ordinary people’s strivings and struggles for justice and dignity that continues today.

Eureka was non-Aboriginal Australia’s revolution for freedom from oppression and exploitation, a call for a genuine democracy for the people, and independence from the domination and exploitation of the British colonial empire. Mark Twain declared that the Eureka rebellion was “a revolution small in size, but great politically; it was a strike for liberty, a struggle for principle, a stand against injustice and oppression… it is another instance of a victory won by a lost battle.”

But the Eureka rebellion cannot be honoured without the full acknowledgement of the struggles by Australia’s indigenous people.  In fact the first organised struggles for sovereignty broke out in 1788 by Australia’s First Nations People, who resisted and fought back the violent and brutal colonisation and occupation of their lands by the British imperial empire.  They were Australia’s first fighters for sovereignty and their struggles never ceased and continue today – we pay tribute to the resilient and courageous First Nations People of this land.

The resistance by the First Nations People from 1788 and the Eureka Rebellion of 1854 sowed the seeds and laid the foundations for Australia’s social and political movements for equality, fairness and justice for ordinary people.  It gave birth to Australia’s militant union movement and its spirit of solidarity and collective defiance in the face of injustice.  It ignited the sparks for independence and a republic.  It was the birth of multi-culturalism.  That fighting spirit for justice, fairness and equality continued throughout 161 years and is still with us today.  It is embodied in the Eureka rebels declarations “We swear by the southern cross to stand truly by each other and fight to defend our rights and liberties”, and Raffael Carbonni’s, one of the rebel leaders, “…the southern cross is the refuge of all oppressed from all corners on earth”.

More than 20 nationalities passionately banded together in an organised and widely supported uprising.  The overwhelming majority were impoverished miners – women and men seeking gold for their livelihoods in the gold fields.  The Eureka rebels’ anger with the British colonial authority was not confined to the goldfields.   The indignation with the oppressive aristocratic British colonial authority that ruled with an iron feast was strongly voiced in the wider community at that time.

The issues and demands around which the Eureka rebels, and their many supporters, united and fought for are still with us today.  And yet to be achieved.

Multinational corporations and the super rich are still paying little tax or none at all – multinational Chevron pays only $285 per year and there are many others.  Just as during the British colonial rule of Australia most of the multinational corporations profits are sent out of the country , whilst the working people, who are the sole creators of this country’s wealth, pay the taxes.  And now there’s talk of a GST increase.

Many anti-terror laws, WorkChoices, ABCC, the royal commission into trades unions, continue to erode our democratic rights and liberties

US-Australia Alliance ties Australia into US war machine.  Australia’s subservience to British empire’s wars until WW2 is now replaced with our successive government’s servitude to US policies of military aggression and wars around the world.  Australia’s sovereignty and independence is no better demonstrated than by the integration of Australia’s defence forces and foreign policy completely into US military plans and adventures.  Australia is now virtually a US military base and a launching pad for US wars.  Australia desperately needs an independent foreign policy.  And there’s Pine Gap….next year 50th anniversary..

TPP, ChAFTA, free trade, undermines our sovereignty – where foreign corporations are empowered to sue sovereign governments, and attack the rights of workers and communities to decide what sort of country they want to build and live in.

The dismissal of the progressive Whitlam government which took a few steps towards Australia becoming more independent from US and Britain economically, politically and militarily and dared to ask questions about the US controlled military and intelligence base Pine Gap and the role of the CIA.

The Eureka rebellion had succeeded in winning the right to vote in parliamentary elections for all citizens, but the power of corporations over governments through the outfits like the Business Council of Australia, more often than not overrides the wishes and the interests of the people.

The vision and struggle started at the Eureka Stockade rebellion continues today.

We have just been contacted by our SoE friends in South Australia.  11 councils in Adelaide are flying Eureka flags over their Town Halls and public places. 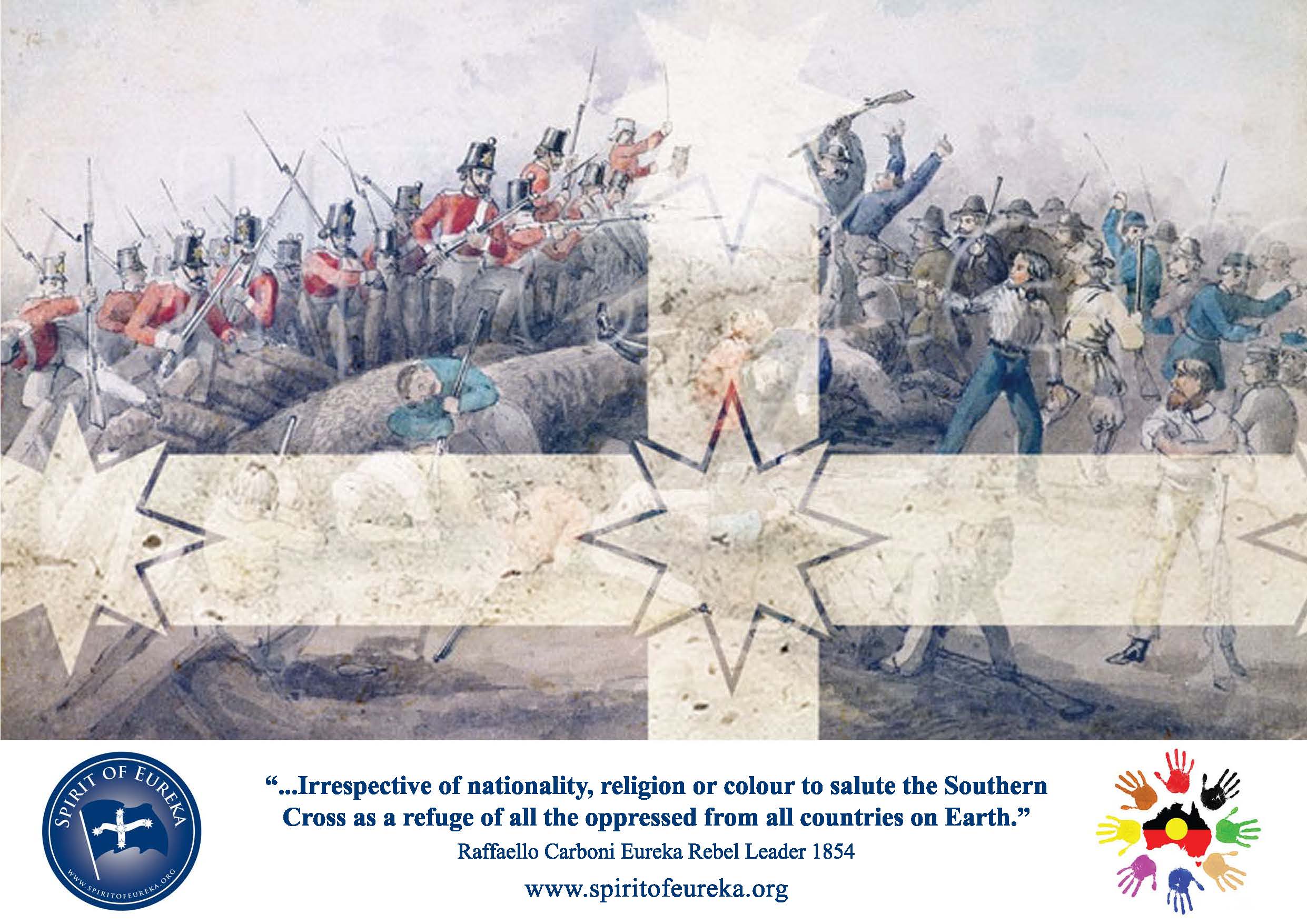 Wording on the plaque – Raffael Carbonni’s quote, with tribute to Sean.

This year’s Eureka Award is in recognition of Sean Murtagh’s life-long work and dedication to the rights and dignity of Australia’s working people – that is the 99%.

Sean was one of the founding members of the Spirit of Eureka committee established in 2004 on the 150th anniversary of the Eureka Stockade rebellion.

Very sadly Sean passed away nearly two years ago, and we at the Spirit of Eureka haven’t stopped missing him.

Sean was a metal worker in the metals manufacturing industries for all of his adult life.   Most of that time he was a hard working, militant union shop steward who worked tirelessly to organise, educate and mobilise the rank and file workers as a collective force for their rights and conditions.  Sean was fiercely opposed to the 1984 Accord that sold out the workers of Australia – and now he, like many other workers and unionists at that time, have proven to be right.  But Sean was more than a militant unionist fighting to defend and improve immediate conditions on the job and in his industry.

He had a much wider and far sighted vision for the whole of the working class and working people of this country.  Sean was passionate about Australia becoming a republic that was genuinely independent from the United States, or from any other big power domination, economically, militarily and politically.  He strongly believed in Australia’s real independence and promoted a vision of an independent Australia where the working people would truly run our country in the interests of ordinary people.

Sean was very proud of, and inspired by, the legacy of the Eureka Rebellion that had created the Australian people’s anti-authoritarian culture of fighting for fairness and justice.  He also admired Ned Kelly, and one of his favourite pieces of writing was Ned Kelly’s famous Jiralderee letter, that embodied Sean’s own passion against the injustices of the ruling class.

Sean was involved with others in putting out the call for super-profits tax on the mining corporations and to use this to pay for public education, health, welfare, community services and developing a sustainable and viable manufacturing industry in Australia.

He immersed himself in campaigns for the rights of working people, against WorkChoices, the ABCC, the anti-terror laws and the treatment of refugees.  He strongly supported the Aboriginal people’s long struggles for land rights, a genuine treaty and sovereignty.

Sean read widely, worked with, and listened carefully to people from all walks of life; he closely observed the world around him and reflected on his own experiences as a worker.  He deeply thought about the economic and political situation in Australia and how it impacted on people’s lives.  He spoke strongly in favour of building a united front alliance between workers, unions, small farmers and small businesses that would stand up to the multinational corporations who are crushing their livelihoods.  He detested the control multinational corporations and big business have over this country.

There are many things we will remember Sean for.  His piercing humour and ability to cut through bullshit were some of them.  Sean was a deep thinking worker. He never made pronouncements on anything without doing investigation and considering all aspects of the problem.  He despised lazy and slavish thinking that substituted facts in a real world with wishful thinking.  And he had no time for self-servers seeking limelight and self-promotion.

He used his piercingly sharp and wicked sense of humour to cut through all the falsehoods, artificiality, lies and the spin of politicians, corporate mouthpieces eg. BCA, main stream media (especially Murdoch) that manipulate people’s thinking and ideas.

If Sean were here with us listening to this tribute to him, he would say, cut the crap and get on with the night.

On behalf of Spirit of Eureka we present Penny, Jack, Connor and all his family with this plaque in his memory.