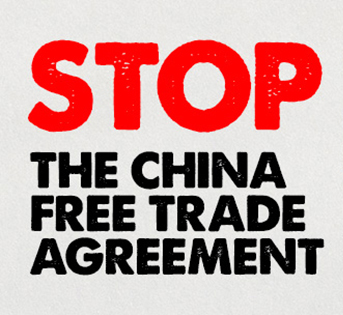 “The  deal  reached by the  ALP and the Coalition on  the  China  FTA falls  short  of  the recommendations of the ALP dissenting report for the Joint Standing Committee on Treaties published only two  days  ago,” Dr Patricia Ranald,  Coordinator  of  the  Australian  Fair  Trade and Investment Network said today.

“The  ALP dissenting report  recommended that  the  Migration  Act  be  amended before  the China FTA implementing legislation is passed to require that jobs for Investment FacilitationAgreements  (IFAs)  be  advertised  locally, that  would raise  the  minimum  rate  of  pay  for temporary  migrant  workers, that  would ensure  skilled  workers  have  the  relevant  license  or registration within   60   days,   and for improved resources  for enforcement to   prevent exploitation,” said Dr Ranald.

“It  is  claimed  that  the  regulations will include labour  market  testing for IFAs,  raising  the minimum rate of pay for temporary migrant workers to local market rates and ensuring that skilled  workers  have  the  relevant  license  or  registration  within  90  days, but without  the details  of the regulations we cannot know if this is the case,” said Dr Ranald

“There  are  other  problems  with  the  China  FTA.    It was  concluded  in  haste, parts  of  it  are unfinished and there has been no separate study of its impact on the economy as a whole. We  remain  opposed  to  the  inclusion  of investor  rights  to sue  governments  over  domestic regulations, known as ISDS, the lack of improved regulation of quality and safety standards for imported food and other products, and note that there are no mention of commitments by China  or  Australia to enforceable workers’ rights  and  environmental  protections similar  to those in  some  other  recent  agreements. Overall,  the  agreement  is  not  in the  national interest,” said Dr Ranald