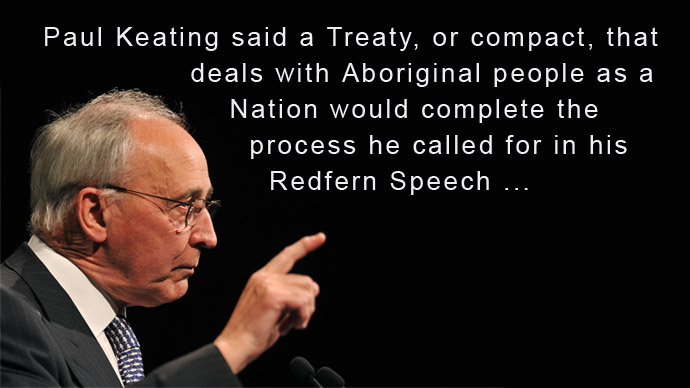 An opinion by Ghillar Michael Anderson

Former PM Paul Keating’s foray back into Aboriginal politics [16 October 2015 Sydney Morning Herald article Paul Keating pushes ‘unfinished business’ of Indigenous treaty and republic] where he talks up the need for a Treaty with Aboriginal and Torres Strait Islanders and describes it as the ‘unfinished business of the nation’ is pleasing to the ears of some of us older fighters who sees the Recognition campaign as trap.

It is interesting that Prof Patrick Dodson clearly has lost his way in the political melee and finds himself in a quagmire of confusion and frustrations, when he ‘argued that constitutional recognition should come first’ (before a Treaty).

From 1979 to 1981 Prof Patrick Dodson and a small group of supporters made submissions to the Senate Standing Committee on Constitutional and Legal Affairs saying that a Treaty, underpinned by sovereignty, is not an issue that should be pursued. 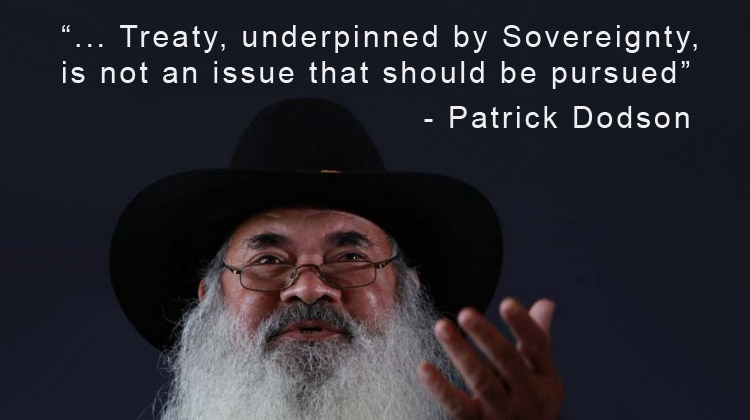 Prof Dodson’s return to this argument in the same Sydney Morning Herald article suggests to me that he, Marcia Langton, Lois O’Donaghue (Lowitja) and Peter Yu had reached an agreement when they all met together with HRH Elizabeth II at Buckingham Palace in 1999. What is revealing in Prof Dodson’s objection to the Treaty and Sovereignty debate is his commitment to fight tooth and nail against these notions.

The thought of PM Malcolm Turnbull reviving the suggestion of Australia becoming a Republic is exciting, because it will open the door to much public discussion, which will include the broader community, and which I have no doubt will include Aboriginal participation in these discussions both at a local, regional, state and Federal levels. A significant move such as a Republic must be concluded by an agreement by all people on the construct of a new Constitution before consent can be given by the people for them to be governed.

The creation of specific rights for Aboriginal Peoples as the original title holders to this Country, pre British invasion, will be an essential factor before anything can be proceeded with. 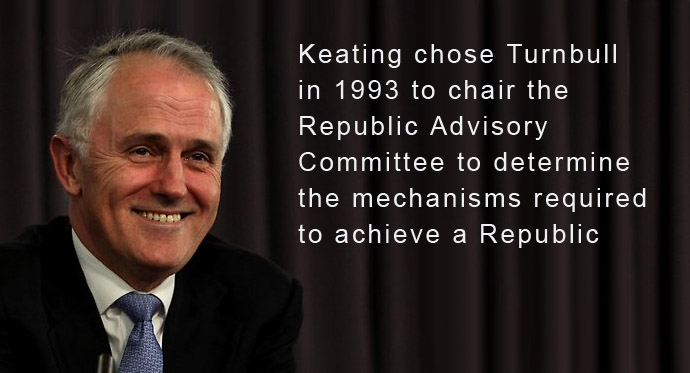 Why should enormous amounts of money be wasted in pursuing and promoting ‘recognition in the constitution’, knowing that the majority of Aboriginal people at the grassroots vehemently rejects this as a pathway? We say this because, as Keating rightfully eludes to, Australia must deal in an open and honest manner with the true history of this country so as to conclude the ‘unfinished business of the nation’.

Michael Gordon’s Sydney Morning Herald article of 16 October 2016 Paul Keating pushes ‘unfinished business’ of Indigenous treaty and republic concluded his article by saying: ‘The Chinese have this word, the chi, the blood energy. An Australian republic would revolutionise Australia’s chi, the blood energy, and not just by telling us better who we are and affirming our sovereignty over the place, but it is being a powerful economic event into the bargain.’

Clearly the so-called liberal minded free-thinking journalists still find it difficult if not impossible to even consider that there continues to be in this country a continental common law, Aboriginal Law, that can only be taken if the each individual Aboriginal Nation chooses to cede it, otherwise Aboriginal Law is the Law of the Land. Yet we continue to have an imposed foreign sovereign State occupying our Lands, and as Aboriginal Nations and Peoples we will continue to be subject to a dictatorial and autocratic occupation by an alien State, that will continue to rule us by sheer weight of numbers and force. Our Human Rights will be limited to what they, the occupiers, are prepared to afford us under their terms and conditions. Unless our sovereignty is asserted and respected our right to be self-determining and retaining our nationalities will be quashed. This and other issues will be the central focus at the up coming Gathering of Nations in Canberra 21-22 November 2015. 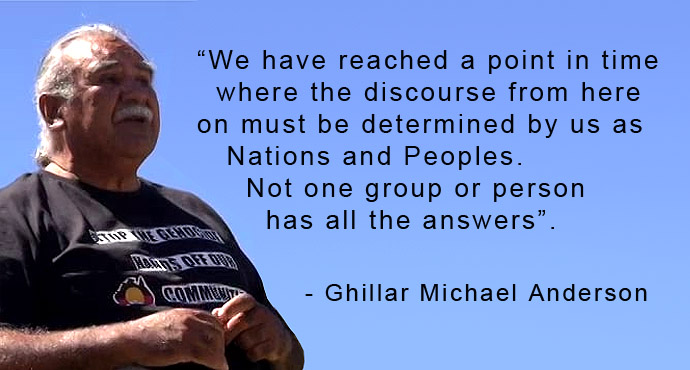 We have reached a point in time where the discourse from here on must be determined by us as Nations and Peoples. Not one group or person has all the answers. It will take all our ideas and all our brilliance to locate a pathway forward satisfactorily for all our Peoples across this Country.

There is no more room for personality clashes, but we must make every effort to shut down those who are running interference on behalf of the colonisers. If we cannot maintain an aggressive approach to bringing an end to our colonisation then we will be responsible for leaving a legacy of frustration, ambiguity and uncertainty for our future generations. Is this the legacy you want to leave behind? Or are we adult and mature enough to satisfactorily work together to nut out our differences, shed the colonial mindset and think and be Aboriginal. We cannot work both sides of the fence to find a solution. If we need to travel the hard road, then so be it. But if you seek to please because you are not prepared to fight the fight and walk the hard road then you do not belong in this struggle. From my personal position I say to those who are weak and want to work with our colonisers to assimilate us into a single society, observing the same rules, following the same traditions and beliefs of those who oppress us: You have lost the right to participate in locating solutions for you have already made your choice to work against us.

The forthcoming Gathering of Nations I hope will assist us to locate pathways forward and thus free us from oppression.