31 January 2023
Trending Now
Home Latest News To whom does the Eureka Flag belong, and why?

The article below was a presentation given to the executive of SA Unions. The executive endorsed the historical analysis and sentiments about the significance of the Eureka flag and the unfortunate misrepresentations of it by racists organisations. 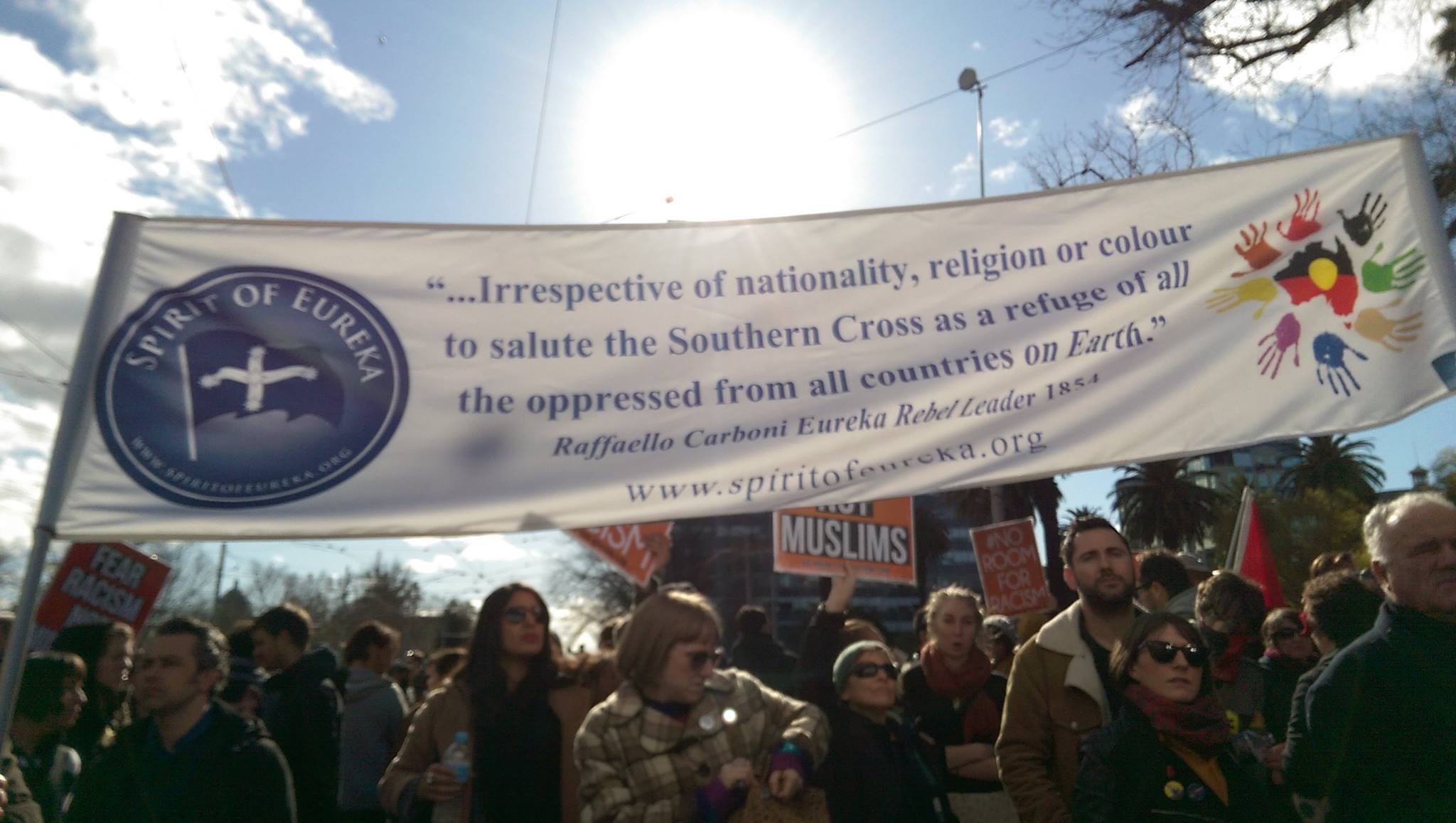 I raised the matter of the Eureka flag at SA Unions Executive and believe we need to be able to answer the questions above.  A number of unions use the flag or have incorporated it in their logos and messaging, but it has also been associated with right-wing racists.

I am prompted to write this following the anti-racist rally at Parliament House on July 18.

As I walked past the Railway Station on the way to the rally, a young bloke noticed my Eureka flag and fell in with me, saying it was great to see the flag out and that he hoped we had a good turn-out.  After a bit of chatter, I asked him which of the rallies he was going to, and he said Reclaim Australia.  I said, “I’m not going there mate, this is a multicultural flag, it doesn’t belong to racists”.  Getting ready to duck in case he tried to snot me, he instead patted me on the back, said “Fair enough, I’ve got a Filipino friend”, wished me luck and went to his side of the police lines while I went to mine.

While the anti-racists outnumbered the Reclaim mob about 5-1, and there were more Eureka flags on our side of the lines than on theirs, there is confusion about the flag and what it represents. 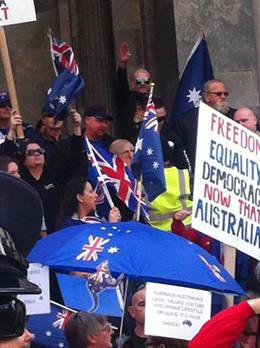 There were at least two guys on the Reclaim side who gave Nazi salutes and called out “White Power!”  One of them had a Eureka flag (centre, top, below).  There were a couple of others with Eureka t-shirts.

So who does the flag belong to and why does it matter?

The Eureka Rebellion took place on December 3, 1854.  There were at least 21 nationalities represented among the diggers.  Among the Irish, Prussians (Germans), French and Italians were veterans of various revolutionary movements which reached their climax in 1848 across much of Europe.  Quite a few were refugees from political and religious persecution. None of the Anglo-Australian diggers shouted out “Send them back!” when they all had to stand united against British colonial tyranny.

There were men of colour among the diggers.  Two of these were arrested with 11 other “ringleaders” and put on trial for treason, a hanging offence. John Joseph, a black man from New York, was the first to be put on trial, the prosecution believing that it would be a relatively easy matter for a jury to condemn a black man, and that this would set the precedent for the conviction of the others.

The jury instead freed Joseph.  Ten thousand Melbournians waited outside the court-house for the verdict, one in every ten of Melbourne’s population.  When John Joseph emerged from the court, he was put in a chair and carried around the streets in triumph.  All other ringleaders, including James Campbell, a black Jamaican, were subsequently released without conviction.

None of the diggers called out “White Power!” when they all had to stand united against British colonial tyranny.

Rafaello Carboni was an Italian who wrote the eye-witness history of the Eureka Rebellion. He recounts how he addressed a mass meeting of the diggers on 30 November, 1854:

We must meet as in old Europe — old style — improved by far in the south — for the redress of grievances inflicted on us, not by crowned heads, but blockheads, aristocratical incapables, who never did a day’s work in their life. I hate the oppressor, let him wear a red, blue, white, or black coat. — And here certainly, I tackled in right earnest with our silver and gold lace on Ballaarat, and called on all my fellow-diggers, irrespective of nationality, religion, and colour, to salute the Southern Cross as the refuge of all the oppressed from all countries on earth. — The applause was universal, and accordingly I received my full reward:

None of the diggers, “irrespective of nationality, religion and colour”, rejected Carboni’s sentiments when they all had to stand united against British colonial tyranny. Rather, they universally embraced the Eureka flag “as the refuge of all oppressed from all countries on earth”.

Not all of the diggers were fleeing oppression in Europe.  Some had already freed themselves from British colonial tyranny – the Americans.  The US Declaration of Independence was issued on July 4, 1776, but the War of Independence was not concluded until September 1783. The presence of American diggers on the goldfields was threatening to the British colonial authority in Victoria.  The Americans were referred to as “democratic agitators” and “democratic revolutionaries” with a foreign ideology and backed by a foreign power.  Remember, there was no democracy in Victoria in 1854: it was in every respect a foreign and dangerous threat to the way that colonial authority was exercised.  The Americans, and particularly the California Rangers’ Revolver Brigade, were spoken of in the press in the same tones that were later used against Communists during the witch-hunts a century later.  The Americans (ironically, in view of their nation’s later imperialist ideology and practice) were on the far left of the left/right divide of the 1850s.  None of the diggers raised objections to “agitators” and “revolutionaries” when they all had to stand united against British colonial tyranny.  They were the Left of their day.

Democracy was not the only “alien ideology” that threatened the Anglophile authorities.  The Americans, the Irish and a number of the Europeans were proudly republican.  When the Age in January 1855 identified the three main currents of thought running through the colony of Victoria, they were “the overwhelming expressions of contempt towards the authorities, of sympathy for the diggers…and…the open assertion of republican principles”.  For Governor Hotham, the Eureka flag was the “Australian flag of independence”.  None of the diggers wrapped themselves, Cronulla-style, in the Union Jack or tried to cling to a British heritage which had oppressed them when they had to stand united against British colonial tyranny. 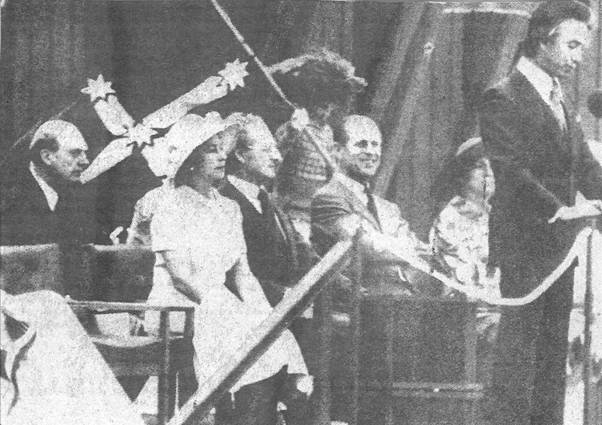 (Above: A younger and hairier SA MP Eddie Hughes displays his support for independence and a republic and his rejection of the Union Jack-dominated “Australian” flag)

Were all the oppressed brought under the Eureka flag at Ballarat?

Women were excluded from the fighting, although they created the flag and served as scouts beating rubbish bin lids and pots and pans to warn of the movement of colonial troops.  The right to vote was not extended to women as part of the diggers’ demands.

There were around 2000 Chinese on the Ballarat goldfields.  While it was not uncommon for European miners to speak 2 or 3 or more European languages, none spoke Cantonese and the Chinese had little English.  Yet the Chinese could have been an invaluable ally.  From 1839-42 the British fought their first war against China for the freedom to export opium into that country.  Millions died. In 1850, the Taiping Rebellion against both the British and the Qing Dynasty broke out.  It eventually saw 20 million Chinese killed and was in full swing at the time of Eureka.  Despite later anti-Chinese sentiment on the goldfields, anti-Chinese demands were not raised in the context of the Eureka rebellion.  Chinese miners were not involved in the Rebellion but were a visible presence around Ballarat, which makes even more remarkable the inclusive rhetoric of people like Carboni, and the acceptance of that rhetoric by the diggers.

In terms of the politics of the Reclaim mob, and of the Nazis embedded within them, there is nothing to associate the Eureka flag with anti-Chinese racism or with opposition to immigration. 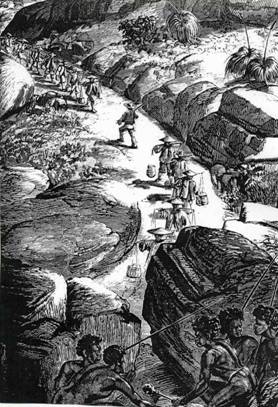 All of the diggers were unsettlers of the Wathaurung people, the traditional owners of the country in which Ballarat is situated.  Chinese and Europeans alike invaded their lands and dispossessed them, although their sovereignty was never ceded.  While there is some evidence of unsettler miners utilising Aboriginal local knowledge about the terrain and bush tucker, and some Aborigines were employed by as labourers by miners, there were few positive relationships built between the two groups.  Carboni was an exception: he stayed with Aborigines long enough to learn some language, and he later wrote a musical, Gilburnia, about the unsettling of the Tarrang people and the kidnapping of a Tarrang woman by unsettlers.  Knowledge held by the Aborigines could have been used to ambush and trap the colonial troops and may have led to a different outcome to that which followed the Sunday morning attack on the depleted diggers’ ranks at the Stockade.

And what about after 1854?  We know the Nazis, National Action, Nazi Jim Saleam’s Australia First Party and other racists have tried to claim the flag in recent times, but how has it been used, and by whom, since the Rebellion?

There had been some trade unions before 1854, but the formative period really began twenty years later with the Amalgamated Miners’ Association in Victoria, and in 1886 with the Amalgamated Shearers’ Union in Ballarat.  Founding members of both organisations claimed to be part of the tradition of Eureka.  Lawson wrote tributes to Eureka and the flag of the Southern Cross in the late 1880s and the flag was flown with the Eight Hours Banner in 1890 at a mass meeting of 30,000 people on the Yarra Bank.   The following year, the Eureka flag flew over armed shearers’ camps in Queensland as they drilled in military formation.  In 1938, the Port Kembla wharfies swore the diggers’ oath as they took on Menzies and banned the transport of pig-iron to Japan in support of China’s fight against Japanese invasion.  The Eureka flag was also featured in materials produced by the Communist Party in 1951 when it fought against Menzies’ attempts to have the Party banned.  Since the early 1970s, the Eureka flag has often featured in union logos, and in rallies, strikes and occupations too numerous to mention. 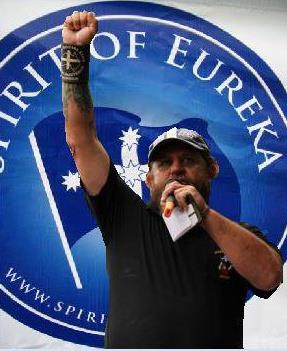 (Above: “My freedom flies with the Southern Cross, and there’s nothing you can do” – Ark Tribe tribute song “Stand Tall”)

Clearly, the Eureka flag belongs to the unions, republicans, anti-racists and refugee advocates.

The best argument against its misuse by racists is a widespread public embrace of the flag as the first expression in Australia of a multicultural aspiration for democracy, freedom and Australian independence from imperialism.

No union should be ashamed to claim the flag as part of this inheritance.  It is part of our history, of the history of our class and our people.  It can only be a divisive symbol so long as Nazis and racists are allowed to carry it unchallenged as to its symbolism and its multicultural origins.

Unions, more than any other organisations, should protect and defend the Eureka flag from misuse by those who would divide the unity of the working class.