Organisers of the undeclared Frontier War’s parade today, during the Canberra ANZAC day parade condemned the actions of the Australian Federal Police for refusing to allow 200 Aboriginals and their supporters to peacefully march up ANZAC Avenue to lay a Wreath to Commemorate all those who died in wars, including those who died in the 18th, 19th, and twentieth century Frontier Wars defending their country.

Ghillar Anderson said the AFP demonstrated appalling behaviour at the Frontier Wars commemoration March and that he would now seek advice in respect to whether what had happened constituted an act of racism.

Despite obeying police directions, Senior Sergeant Adrian Crank grabbed and assaulted three Aboriginal people without just cause and threatened to arrest them.

Sergeant Crank claimed that the RSL had not issued a permit to the Frontier War’s organisers, but according to Aboriginal organiser, Ghillar Anderson, the RSL and AFP had allowed Aboriginal people over the past four years to conduct a peaceful commemoration.

What was different this time? Why did the AFP turn this normally peaceful event into an ugly confrontation incident?

Ghillar Anderson said that the AFP had overstepped their authority. Both the AFP and RSL must explain their actions and offer an apology. “It was impossible but to conclude that our commemoration group was subject to overt racism, particularly as Fred Hooper, a decorated submariner was prevented from peacefully leading the group up to to the War Memorial. “I was appalled when Senior Sergeant Crank said, ‘This is not your day'”.

Ghillar Anderson said, “this appalling behaviour by the AFP and that he would now seek advice in respect to whether what had happened constituted an act of racism by the RSL, the War Memorial an the Federal police”.

The scene today in Canberra clearly demonstrated that despite promoting that the first world war was to fight for our freedoms and right to exist without fear of tyranny, it has been made very clear that these rights and freedoms do not apply to us as Aboriginal Peoples.

The violent confrontation that was witnessed by all present resulted from Sergeant Adrian Crank losing his cool and his apparent hate for us and what we represented. This action has shown to us that reconciliation is a long way off and that any thought of us being recognised in the Australian constitution is to steal our patrimony.

The Police barricade illustrated the division between us and white Australia. We have a long way to go in human rights in this country. 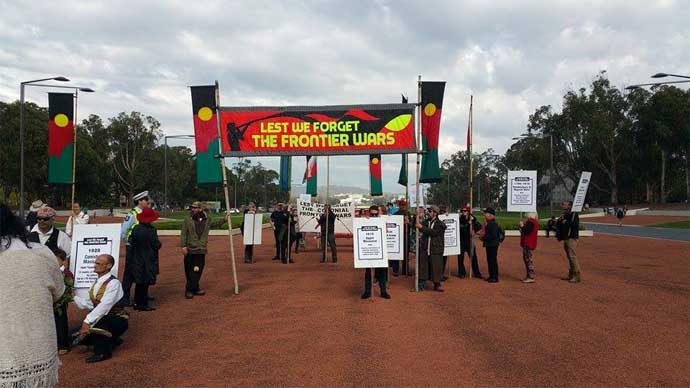