by Spirit of Eureka – South Australia 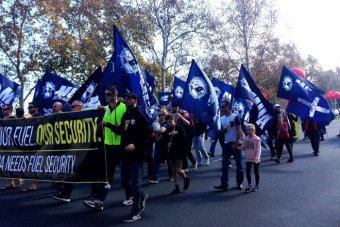 May the 1st is International Workers Day. Since 1886 it has been celebrated by workers around the world as an expression of their international solidarity and shared political aspirations for freedom. There is much to commemorate about past achievements, however the working class have many struggles ahead of them.

The worker’s lot around the world has worsen because:

·         expansion to its military bases and facilities in other lands, with Australia being an important site for its ‘Asia Pivot’ military strategy

·         The five pillars of our people’s livelihood – housing, transport, health, education (public and free), and employment – are continually under assault by the Abbott Government.

·         Indigenous Australians still suffer the Intervention to take away their economic survival and children; and more recently the forced closures of their homelands to deprived them of their connection to land and sovereignty.

·         A rise in racism against refugees, in particular Moslems, which has been fanned by the Abbott Gov’s cruel treatment of asylum seekers and war mongering in sending Australian troops into battle in Iraq.

·         the Big 4 Bank’s corruption keeps getting bigger and bigger e.g. ANZ has been forced to return $30m they ripped-off their customers.

·         Corporations tax avoidance has been exposed but the government does little to nothing in stopping it.

·         The SA Gov will close down local public hospitals (such as the treasured Daw Park Repatriation General Hospital) and centralise their services, therefore disadvantaging patients from the outer suburbs.

·         Open the door wider for the hazardous nuclear industry in SA to expand from mining into enrichment, energy and storage.

·         Implement a regressive land tax and let big business off the hook by eliminating stamp duty, payroll and insurance taxes.

·         The SA Gov has reversed its security of tenure policy for all public sector workforce.

Around the world there is a growing disillusionment with the continuing global economic crisis, their governments’ economic austerity policies and aggressive military adventures. Workers as always shoulder the burdened. This has resulted also in the disenchantment with parliamentary political parties as can be seen in Greece and Spain today.

Similarly in Australia, there is not much enthusiasm for politicians and their parliamentary wagon trains. The working class is not represented by the major parliamentary political parties.

Most people only see the Australian Labor Party as an organisation to apply pressure on and certainly not one to rely on! These parties are only loyal to the class interests of the rich.

Witness the ALP’s efforts to outdo the Liberal’s in schemes to privatise, deregulate and impose intolerable burdens on ordinary people. Plus both only see the future under United States domination.

Consequently our parliamentary system of government is the captive and play thing of the big corporations. They run the country and parliament is their minder.

The only real alternative for workers and their allies is to undertake an INDEPENDENT WORKING CLASS AGENDA, that is free of parliamentary parties so as to pursue their just demands and democratic rights.

This is the key to further advancing an independent working class cause, namely that it serves to focus and intensify the voice of the voiceless, to give confidence to those without much hope for the future, to unify and strengthen those who instinctively understand that their interests are not being represented in the parliamentary talking shops.

By developing an enormous mass movement of working people, through their communities and unions etc, only then will we be able to wrest political and economic power from the ruling corporations and start the journey to creating new institutions for a Just, Democratic and Sovereign Australia.

AUSTRALIA FOR THE PEOPLE!