Ghillar, Michael Anderson, Convenor of the Sovereign Union, Head of State of the Euahlayi Republic and co-founder of the 1972 Aboriginal Embassy said from Goodooga today:

The most recent media comments by Tony Abbott, self-styled ‘Prime Minister for Indigenous Australia’ demonstrate the voice and opinion of a tyrant, dressed up in a liberal suit. The racist comments by PM Abbott in response to Aboriginal opposition to being forcibly removed form their lands resonates in the most negative of ways. As the ABC reported:

Yesterday, Mr Abbott backed a plan in Western Australia to close more than 100 remote communities and move more than 12,000 people, saying “what we can’t do is endlessly subsidise lifestyle choices”. 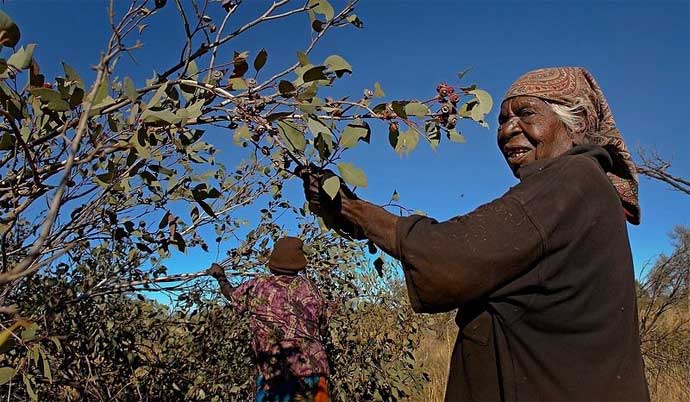 Homelands are communities established by First Nations people so that they can maintain their connection with their ancestral land. These communities have lower levels of social problems and significantly better health outcomes – as well as a strengthened connection to culture, language and spirituality.

We all know that the Western Australian government and Tony Abbott seek to clear the interior land mass of any and every resisting Aboriginal person, so they don’t have to deal with Land Rights issues, water rights issues and environmental issues. Those of us in the East know full well what is yet to come for the Peoples of northwest South Australia, Central and Western Deserts, Pilbara, Kimberley and the Northern Territory. Queensland, New South Wales and Victoria have already had these experiences. Letting people die as a consequence of being removed from Country is a continuation of the old colonial regimes.

These actions by PM Abbott and WA Premier Barnett are in breach of international law:

“… forced evictions are … incompatible with the requirements of the International Covenant on Economic, Social, and Cultural Rights and could only be justified in the most exceptional circumstances …”

“… severing the ties of Aboriginal people from their land and thus their culture, spirituality and very foundation of their being, is unethical, immoral, un-Christian and heartless.”

The ‘Beneficial impact of the Homelands Movement on health outcomes in central Australian Aborigines’ has been well researched by Robyn McDermott’s team. They conclude:

“Aboriginal people who live in homelands communities appear to have more favourable health outcomes with respect to mortality, hospitalisation, hypertension, diabetes and injury, than those living in more centralised settlements in Central Australia. These effects are most marked among younger adults.”

As we review Australia’s historical records, we of the Sovereign Union, become extremely concerned and alarmed when we are reminded of former Liberal PM Sir Robert Menzies’s attitude in 1938 when he returned to Australia from Germany and was in support of David Lloyd George MP in England and that he:

“…was not afraid of Hitler; he admired him. This was one of the reasons why Menzies found him [Hitler] intriguing. He had once said that Hitler was a ‘great leader’ and he shared the view that Menzies himself had formed on his visit to Germany in 1938. 1”

Prime Minister Tony Abbott is a self-styled ‘Prime Minister for Indigenous Australia’ who demonstrates contempt towards the United Nations and the First Nations people.

The policy of the Protectors of Aboriginal people in Australia resonates with part of the Nuremberg Trial evidence used to convict Himmler as a war criminal who stated:

“Either we win over any good blood that we can use for ourselves and give it a place in our people or, gentlemen – you may call this cruel but nature is cruel, – we destroy this blood.2

Australia failed with their 1937 Final Solution to the ‘Aboriginal Problem’, but now Tony Abbott is very obviously resurrecting the policy of the Final Solution.”

Removing our Peoples from the Homelands does and will have serious mental and spiritual ramifications and this is well known within political circles. Two examples can be used to best describe that governments are well aware of the effects that forced removal will have on First Nations Peoples.

As late as 1943 the New South Wales Government knew of the damage that was being done to Aboriginal Peoples under their statutory authoritarian ‘protectionist’ regimes. Lt. Colonel Bruxner argued that:

“The greatest difficulty, of course, is that the very primitive people are tremendously susceptible to spiritual influence. When they come into contact with white people a problem that a large number of us do not understand is immediately created.3”

“The Honourable member for Parramatta (Mr Gollan MP) truly said that when an Aborigine is moved from his own locality he immediately gets among unfriendly spirits. The spirit world is a tremendous force with these people. I have seen Aborigines who have been up almost half the night because of bad dreams; they have been outside their own area in an unfriendly place. One of the greatest problems confronting the department is the settlement of Aborigines where they belong. These people are frequently moved from one district to another so as to give them better conditions, and when we take them away from the place where they were born and reared, and where they expect to be buried, we do them incalculable harm.”

Pursuing these policies of forced removals is an international crime, called genocide. Two elements of the 1948 Convention on the Prevention and Punishment of the Crime of Genocide are:

a. Causing serious bodily or mental harm to members of the group;
b. Deliberately inflicting on the group conditions of life calculated to bring about its physical destruction in whole or in part;

This cannot be tolerated in any way, shape or form. Aboriginal people must increasingly resist and launch national and international campaigns against the tyranny of this Abbott-led dictatorship.

Non-Aboriginal people in this country fail to see what is going on right before their eyes, in respect to the abolition of Human Rights in the name of protectionism against ‘terrorism’, but the governments seek to protect white Australia from the horrors and threat of terrorism, but are actively pursuing a terrorist campaign in its most horrid form against our peoples across Australia.
Part of this campaign is ‘instilling terror’ into the hearts and minds of our people and echoes Governor Phillip’s instructions to ‘infuse an universal terror’4 when he commanded that severed heads of the Aboriginal people of the Botany Bay and Part Jackson area be placed on stakes in full view amongst Aboriginal people in the newly imposed colony. 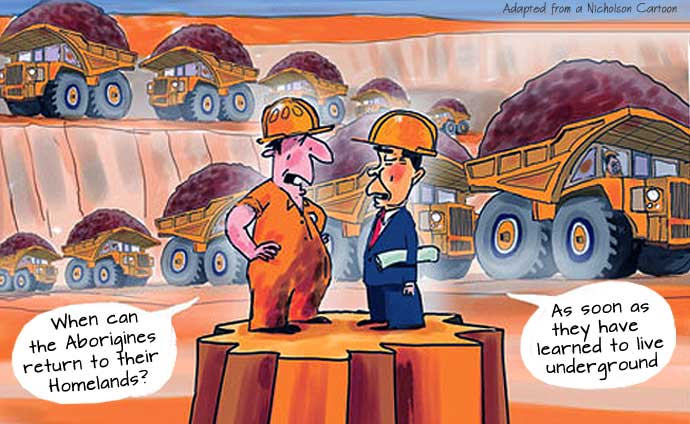 This can be best illustrated by the high incarceration rates, the condemning of Aboriginal men with the stigma of being sexual predators within their own communities, which is now leading to the removal of children en masse, which our communities are now calling ‘commodity and equity exchange’ in the world of commerce because Aboriginal children being placed in white/non-Aboriginal foster care puts many thousands of dollars into white homes. The consequences for the Aboriginal children are dire. In that they are removed form their cultural background and natural environment. It is not for Tony Abbott to decide what he considers to ‘be in the best interest’, especially given the fact that there is now an extension of a Royal Commission into child abuse in foster homes and other out of home care.

Then, on the other hand, deaths in custody and suicides are resulting in our people having to live on the streets when they are forcibly removed from their homes, for the sake of free access for mining and mineral exploration.

This government is completely ignoring the legal rights established in the Mabo (No. 2) High Court decision, as they refuse to tell the public that the High Court of Australia has made it very clear that when Britain laid claim to this continent from the time of Lieutenant James Cook in 1770 they NEVER gained ‘beneficial radical title to the land:

“49. …It is not surprising that the fiction that land granted by the Crown had been beneficially owned by the Crown was translated to the colonies and that Crown grants should be seen as the foundation of the doctrine of tenure which is an essential principle of our land law. It is far too late in the day to contemplate an allodial or other system of land ownership. Land in Australia which has been granted by the Crown is held on a tenure of some kind and the titles acquired under the accepted land law cannot be disturbed.”

Complicating this for the governments, the High Court also ruled in Mabo (No. 2) at paragraph 54 that in view of this Aboriginal/Native title burdens Crown title.

“54. Once it is accepted that indigenous inhabitants in occupation of a territory when sovereignty is acquired by the Crown are capable of enjoying – whether in community, as a group or as individuals – proprietary interests in land, the rights and interests in the land which they had theretofore enjoyed under the customs of their community are seen to be a burden on the radical title which the Crown acquires.”

This Abbott government and, no doubt any future Labor government, will continue to perpetrate the lies and deceits that they currently promote. Even the Recognise campaign is a major deceitful method of creating spin to hide the truth and lure our people into the Australian Constitution, something they do not fully understand in terms of the political and legal ramifications associated with being included in a colonial Constitution, which is still about a White Australia, a non-Aboriginal Australia.