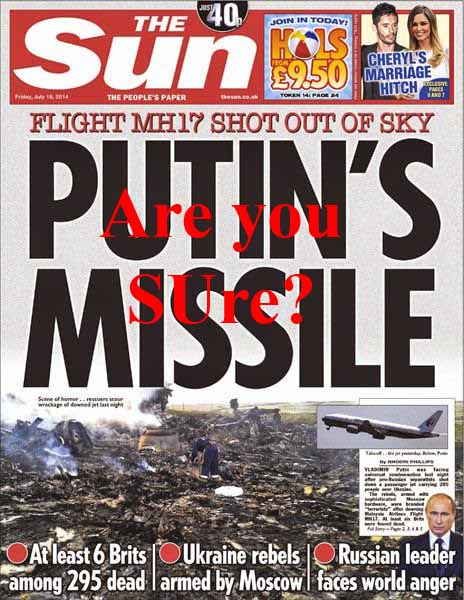 There is an old Italian proverb that says: se non è vero è ben trovato. This roughly translates into colloquial English as: ‘Even if it’s not true, it makes for a good story’.  The political hysteria around the downing of the Malaysian Airlines flight MH17 and the sloppy reporting that has accompanied it confirms the currency of the proverb.  More ominously, it reflects a re-alignment of geo-politics as the USA and its allies try to maintain a unilateral view of world power, which the media, out of laziness or complicity, is not questioning.

What the media says
From the first day of the downing, the Australian media’s position was abundantly clear.  TV’s Channel 7 claimed that it had been ‘confirmed’ that ‘separatist rebels’ shot the plane down using a ‘Russian rocket launcher’.

Since then, the media’s anti-Russian bias has been consistent: the Ukrainian government is acting responsibly and constitutionally, and assisting the international community in recovery and finding ‘the truth’; their opponents to the north and the east have been stonewalling at best, and at worst show a callous indifference to the recovery operation consistent with their presumed guilt.

Do we know any more than we did at the start about the separatists and the situation in eastern Ukraine where the downing happened?  If so, you wouldn’t have obtained the information from the Australian media which is not the slightest bit interested in the rebels and Ukraine and never asks the difficult questions.  And this includes, unfortunately, the ABC, which has exercised neither independence nor insight nor research into alternative explanations for the downing, or provided any views about the broader context within which the political accusations are being made.

Instead, the scramble is on to blame Vladimir Putin and Russia.  It is guilt by insinuation, since no hard ‘evidence’ has been provided.  First it was the Russian rocket launchers used by the rebels; then it was Russian collusion with the rebels’ cover-up, followed by Russian support for and protection of the separatists; more recently there are claims that Russia is putting obstacles to the recovery operation.  Some or all of this could be true.  But we just don’t know.

What the mainstream media hasn’t told you
•    US surveillance satellites:  The region has been the focus of US surveillance satellites for many months, and given that the downing was in broad daylight and that the missile launchers in question are large weapons carried on even larger trucks, it is inconceivable that satellite imagery is not available.  Indeed, one source has claimed that this imagery appears to indicate that the missile battery belonged to Ukrainian government, not rebel, soldiers.  Why is the media not asking for these images to be made public? [see: consortium news.com/2014/07/20/what-did-us-spy-satellites-see-in-ukraine/ & PaulCraigRoberts.org]

•    Suspect Ukrainian sources: The case against Russia comes mostly from the Ukrainian regime.  However, this government is the result of a coup that ousted a democratically-elected (albeit pro-Russian) President on 22 February, and then placed neo-Nazi representatives from Svoboda and the Right Sector in its Cabinet.  Indeed, one of the main sources for Western media is a long-time and notorious neo-Nazi activist.  Why is the media taking his assertions uncritically? [see: consortium news.com/2014/07/20/what-did-us-spy-satellites-see-in-ukraine/]

•    Changes to the flight plan:  There are some indications that the pilot was instructed to fly at a lower altitude than normal upon its entry into Ukrainian airspace, from the flight plan’s 35,000ft to 33,000ft.  There is also a claim that the flight plan was not the usual flight path used by other airlines, but deviated to the north to bring it closer to the Donetsk region where the downing occurred.  Is this true? Who gave the instructions for these changes to the established flight plan?  Why is the media not asking these questions?  [see: http://www.globalresearch.ca/malaysian-airlines-mh17-was-ordered-to-fly-over-the-east-ukraine-warzone/5392540; & www.malaysiaairlines.com/my/en/site/mh17.html].

•    Origin of the missile launcher: Much has been made the Russian origin of the separatists’ weapons. The accusation is undoubtedly true but meaningless since Russia has also supplied weapons to the Ukrainian government.  In what sense then is this fact important as evidence?

•    The separatists’ behaviour: The politicians and the media has asserted repeatedly, without a scrap of evidence, that the ‘terrorists’ on eastern Ukraine appear to be impeding investigations and possibly even trying to hide the evidence.  Yet the handing over of the black box to Malaysian authorities by the rebels shows quite the opposite: it was done with dignity and gravity, and the devices were intact, and the Malaysian PM commented on their cooperation.  The Western media passed over this event with hardly a comment.  [see: www.strategic-culture.org].

•    The Russian defence: Media and politicians have been at pains to provide alternative views and evidence to prove Russia’s innocence in this event, and have provided satellite images that question the USA’s version of events.  Their words may or may not be credible but the public cannot judge since it is hardly reported.  When a brief report it provided, it is presented through the prism of White House commentators.  This is not independent journalism.  [see: www.mondialisation.ca]

•    US missiles: The US has been installing missiles in the countries bordering Russia’s western frontier for some time, under the guise of NATO, which is an act of direct provocation.  This puts the discourse on flight MH17 in a new light, namely, as a part of a long-standing effort to contain growing Russian influence. [see: www.strategic-culture.org]

•    The growing importance of BRICS: There has been an informal alliance between a number of non-aligned nations, informally known as the BRICS: Brazil, Russia, India, China and South Africa.  The objective of this alliance is clear: to reduce the financial power of the US and Europe, and to promote a multi-polar world where global events are not the work of only one power.  This alliance was recently given more solidity by visits to each of the member nations by Vladimir Putin, which provoked considerable consternation in the USA and Western Europe.  Yet Putin’s visits to the BRICS nations was hardly reported in Australia, and its significance as a challenge to the USA was passed over in silence by the media, despite its relevance to the MH-17 anti-Russian hysteria. [see: www.medias-press.info/les-brics-contre-le-fmi/13065.]

The outcome
It is easy to understand the geo-politics of this event, and why the USA, Europe and the Ukrainian government all have a keen interest in damaging Russia.  This is to be expected.  But it is not acceptable for the media to fall into line so readily, and without asking questions or showing scepticism.  In this new Cold War, this complicity with realpolitik is irresponsible and lazy journalism.  The downing may have been the work of the rebels; it may have been the work of the Ukrainian government; it may have been the work of others.  Do your research, get the evidence, make it public as honestly and unscrupulously as possible; don’t just repeat what authorities tell you; delve deeper into the broader context, and question unverified assertions.  But that doesn’t make for a good story.  Se non è vero è ben trovato.

The worst thing about all this is that the casualties of the flight – the dead and their living families and friends – have been used as pawns in the geo-political game of one-upmanship. Feel sorry for these families; feel rage at the sloppiness of the media.