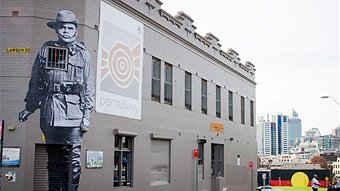 This year’s NAIDOC theme honours all Aboriginal and Torres Strait Islander men and women who have fought in defence of country.

From our warriors in the Frontier Wars to our warriors who have served with honour and pride in Australia’s military conflicts and engagements across the globe.

We proudly highlight and recognise the role they have played in shaping our identity and pause to reflect on their sacrifice. We celebrate and honour their priceless contribution to our nation.

IMAGE: Alfred Cameron Jr, a descendent of the Temprominjirie and Milmanjirie clans of the Coorong was 24 years old when he enlisted on 15th January 1915. He joined his unit at Gallipoli in November 1915. Image by streetartist, Hego and photograph by & copyright Kimberley Low. With thanks to both the artist and the photographer. 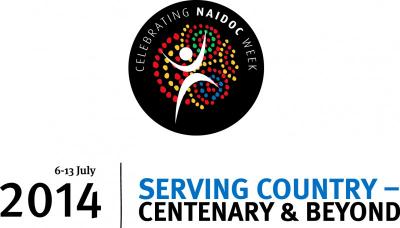 Before the 1920s, Aboriginal rights groups boycotted Australia Day (26 January) in protest against the status and treatment of Indigenous Australians. By the 1920s, they were increasingly aware that the broader Australian public were largely ignorant of the boycotts. If the movement were to make progress, it would need to be active.

In 1935, William Cooper, founder of the AAL, drafted a petition to send to King George V, asking for special Aboriginal electorates in Federal Parliament. The Australian Government believed that the petition fell outside its constitutional responsibilities.

On Australia Day, 1938, protestors marched through the streets of Sydney, followed by a congress attended by over a thousand people. One of the first major civil rights gatherings in the world, it was known as the Day of Mourning.

Following the congress, a deputation led by William Cooper presented Prime Minister Joseph Lyons with a proposed national policy for Aboriginal people. This was again rejected because the Government did not hold constitutional powers in relation to Aboriginal people.

After the Day of Mourning, there was a growing feeling that it should be a regular event. In 1939 William Cooper wrote to the National Missionary Council of Australia to seek their assistance in supporting and promoting an annual event.

From 1940 until 1955, the Day of Mourning was held annually on the Sunday before Australia Day and was known as Aborigines Day. In 1955 Aborigines Day was shifted to the first Sunday in July after it was decided the day should become not simply a protest day but also a celebration of Aboriginal culture.

Major Aboriginal organisations, state and federal governments, and a number of church groups all supported the formation of, the National Aborigines Day Observance Committee (NADOC). At the same time, the second Sunday in July became a day of remembrance for Aboriginal people and their heritage.

In 1972, the Department of Aboriginal Affairs was formed, as a major outcome of the 1967 referendum.

In 1974, the NADOC committee was composed entirely of Aboriginal members for the first time. The following year, it was decided that the event should cover a week, from the first to second Sunday in July.

In 1984, NADOC asked that National Aborigines Day be made a national public holiday, to help celebrate and recognise the rich cultural history that makes Australia unique. While this has not happened, other groups have echoed the call.

With a growing awareness of the distinct cultural histories of Aboriginal and Torres Strait Islander peoples, NADOC was expanded to recognise Torres Strait Islander people and culture. The committee then became known as the National Aborigines and Islanders Day Observance Committee (NAIDOC). This new name has become the title for the whole week, not just the day. Each year, a theme is chosen to reflect the important issues and events for NAIDOC Week.

During the mid-1990s, the Aboriginal and Torres Strait Islander Commission (ATSIC) took over the management of NAIDOC until ATSIC was disbanded in 2004-05.

Since 2008, Anne Martin and Ben Mitchell have been serving as co-chairs of the National NAIDOC Committee.