This article was a leaflet produced by Spirit of Eureka NSW 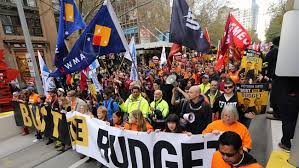 There’s immense anger against Abbott. He’s the face of a brutal capitalist onslaught clearly orchestrated by the Business Council of Australia. Defeating Abbott’s team would smash a hole in the BCA’s plans. But we’d have to be blind to think reinstating the ALP would solve the underlying control of Australia by giant corporations. It didn’t last time, and it won’t this time.

Labor’s leaders were never fair dinkum. Julia Gillard, like Abbott, visited Rupert Murdoch quick smart to get her orders on education. She invited his salesman, Joel Klein, to Australia, and later threatened teachers in Victoria, ACT and Northern Territory with individual fines to break the NAPLAN dispute.

The NSW Teachers Federation campaigned for decades on funding, mobilised to ensure Gonski understood our kids’ needs and stopped the predicted ALP election bloodbath in western Sydney through the Gonski campaign. But, because both Rudd and Gillard cynically used our kids’ futures as an election tool, not a cent of Gonski funding arrived until Labor was out of office. That delay was a crime against our kids.

Martin Ferguson moved seamlessly from the ALP ministry where he helped sink the 40% mining super profits tax, to supporting Abbott  as chair of the “Australian” Petroleum Production and Exploration Association, dominated by huge foreign corporations that thieve our wealth, trash our environment and attack workers. The ALP expelled him for doing openly what he’d done for years in office.

Under Rudd and Gillard, workers continued to be targeted. CFMEU workers in WA copped individual fines for daring to strike, and now the Australian Building and Construction Commission has frozen their assets until they pay up. Labor negotiated on the Trans Pacific Partnership Agreement and other sellout trade deals in secret too, before handing the baton to Abbott. There’s dozens more examples.

It’s taken an ex-Liberal PM, Fraser, to call for economic, political and military independence for Australia.

It’s not about  individuals. But Fraser’s got it right. Under Labor, our US overlords like Murdoch thrived. But still, they dumped Labor. Their system compels them to export their economic crisis and crush our people to protect their profits. They reckon Abbott’s crew can do that more thoroughly with the groundwork already laid.

We need more than a targeted seats campaign to defend Australia. Straight after Howard’s defeat, Your Rights At Work community groups were ditched. Union leaderships know that was a mistake. But unions need to tread carefully. Right now the ALP leadership is a weak and dangerous ally. We need to expect betrayal, to be strong enough to stop them running to their big business masters if elected. We need some industrial muscle back in our arsenal.

It requires not just activists, but the mass of our people, to understand just what we are up against and to organise to fight back. The anger is there. It has to be channelled into united action. Get ready!