In the Flinders University City Gallery, situated in the State Library of South Australia, an exhibition of Political printmaking in South Australia 1970s-1980s documents the critical political issues of the times, which still reverberate today.

The exhibition, which runs from May until the middle of July, is entitled, “Mother nature is a lesbian”. Amongst the important issues depicted from those times such as feminism and gay rights is the anti-imperialist struggle against the Vietnam War, the campaign against American cultural imperialism and struggles of the working class.

One of a number of political arts groups to form in this era was the Progressive Art Movement (PAM). Established 40 years ago in 1974, it was an important part of the Australian independence movement that grew out of the anti-imperialist fervour of those times.

PAM and other art collectives created a vibrant period of printmaking and helped fuel the political landscape around Adelaide from those times. Their political posters and prints challenged conventional notions of art by hosting explicitly social and political driven activities. Much of their work was made accessible via a small cost to the public and could be found on the streets, workplaces, homes and eventually in galleries.

On display are works opposing the Vietnam War and US imperialism such as Mandy Martin’s “The Drive of the US” and Robert Boyne’s “Stroke it Rich”. Ann Newmarch’s “Nationalize the car industry” and Mandy Martin’s “Big Boss” take aim at US corporations profiteering off the backs of car workers. In fact PAM played a supporting role as did other groups, such as students and left wing political organisations, during the militant car workers struggle opposing the Chrysler and GMH companies cut-backs, lay-offs and factory closures.

One of the most popular prints that came out of the 1975 dismissal of the Whitlam government was Ann Newmarch’s “Sunrise”. With the obvious US involvement in the Whitlam sacking the print explicitly points the finger at what control America has over Australia and the need for real independence. 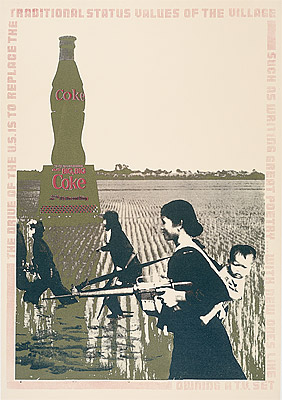 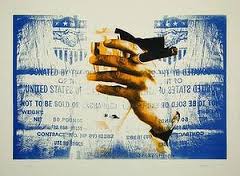 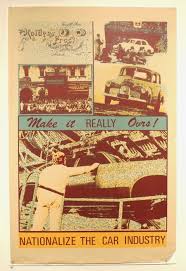 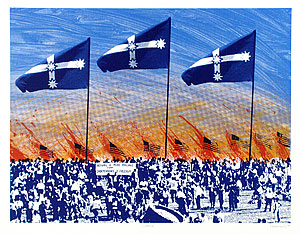