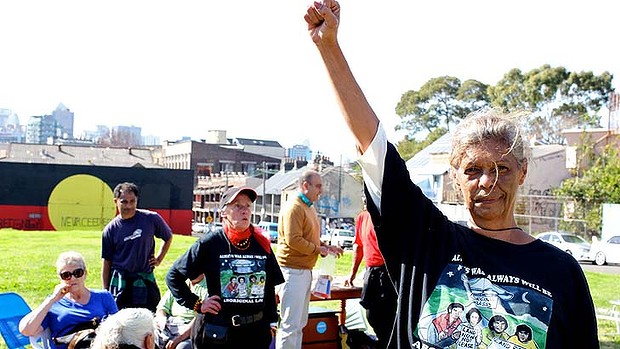 Today Redfern is home to less than 400, where in the past it was the home to thousands of First Peoples. The Aboriginal Housing Company’s Charter stated that The Block was to be for low-income earners and a centre of an Aboriginal experience. Unfortunately it is now considered prime real estate, and the AHC has made public a proposal to develop the site. Such a development will erase what many consider to be part of the heart and soul of the Aboriginal struggle for their rights

The Housing Company’s Charter is committed to the vulnerable and the CEO of the AHC, Mick Mundine, argued the Charter is being lived up to by the fact that 62 houses will be dedicated to “Aboriginal families.” This is very little solace for these people when real estate prices are rocketing up to $1200 in Redfern to rent a small terrace home.

Ms Munro said that Mick Mundine and the Aboriginal Housing Company had betrayed the former residents.

Ms Munro argued that The Block is Aboriginal land, whereas Mr Mundine pointed out it is private land and that the Aboriginal Housing Company is the owner.

Redfern’s history of The Block

The Block has been an important cornerstone of the Aboriginal struggle for justice, especially in the 1960s and 1970s. Many thousands of First Peoples resided in Redfern, where Black Power resistance sprang forth.

From Charles Perkins 1965 organised Freedom Ride, to the protest movement for “Land Rights” and the 1970s where Bob Bellear lead campaigners to oppose landlords to remove Indigenous residents from The Block.

The campaigners successfully lobbied the Whitlam Government for a grant to enable the purchase of houses in 1972 of The Block. From this beginning the Aboriginal Housing Association was established for Aboriginal people to gain low cost housing.

Tragically 30 years later the Aboriginal Housing Company is evicting Indigenous residents and planning a $70 million retail and housing development for the affluent!

A decade ago, Mick Mundine began a war of attrition to remove many of the members from the Board, according to some of the Housing Association’s founding members. The AHA is now the Aboriginal Housing Company (AHC).

Ms Munro pointed out that the mission of the AHA was for The Block to always offer affordable housing for Aboriginals. Now the AHC’s current plans provide no benefit to the Aboriginal community.

The Sorry Day launch of Redfern Aboriginal Tent Embassy is deja vu for Ms Munro who camped at the 1972 Tent Embassy in Canberra. She has promised to camp on The Block till the AHC complies to their Charter and not to commercial interests.

Last report saw over 100 supporters at the camp, a good number of tents and smoking fires. A potential social movement could explode if the campers can build their support into a tent city in the ensuring weeks.

Mr Mundine made the surprising comment that The Block is not Aboriginal Land, but is private land and belongs to the AHC. However, Ms Munro adamantly argued it is. She mentioned that the members of the AHC are dissatisfied with its commercial direction.

The AHC has apparently secured bank loans to build a retail precinct, student accommodation and 62 affordable homes for Aboriginal people, however they still need another $30 million grant from the Government for the project to go ahead.

The AHC has not protected The Block from soaring rates and cost of living pressures, claimed Ms Munro. She pointed out that the exorbitant real estate prices and the cost of living hikes surrounding the precinct marginalised Aboriginal residents.

Redfern is being targeted for gentrification and for the corporate profiteering. Skyscrapers are set to takeover The Block where there will be high density living in the inner city. Mr Mundine welcomed the fact that it could be part of a multi-million-dollar neighbourhood!

Low-income residents around The Block fear that they will be moved out resulting in the loss of contact with each other and lose access to important services such as the Aboriginal Medical Service, if they have to leave.

Jenny Munro and the Embassy appear to have wide community support because Mick Mundine and the AHC are seen to have not supported the Aboriginal Redfern community for a very long time.