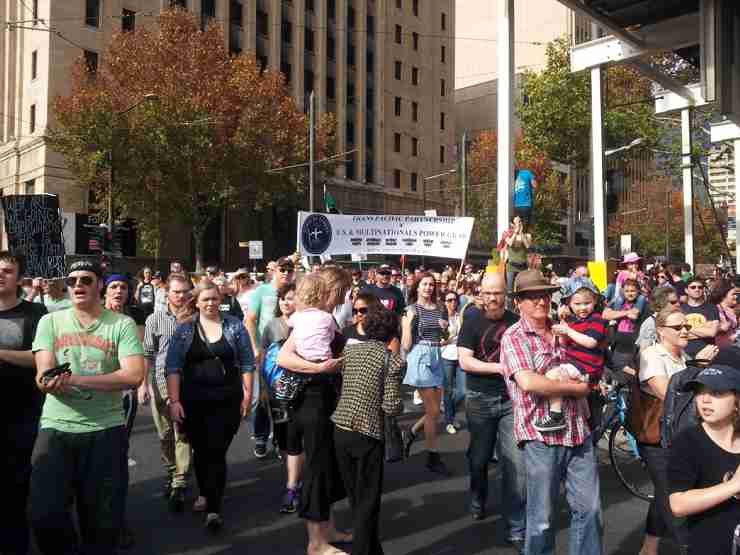 The budget, the TPP, privatisation, commission of audit are all part of the same multinational corporations agenda to screw more profits from the people and the environment. The government has used a ‘debt crisis’ to shift public funds from health, education, welfare into big business coffers. The federal government is doing what it is told by its big business masters.

Hockey’s slash and burn budget at a glance:

• Will now prevent people who are aged 30 or younger from getting Newstart (unemployment benefits) unless they’ve done an “employment services activity” for six months. The under 25 will have to scrape by on the pitiful Youth Allowance because they’re no longer be eligible for Newstart.

• The pension age to be increased to 70 by 2035. From 2017 the age pension and the disability support pension will be indexed to inflation, rather than average weekly earnings and so fall behind the cost of living.

• University funding will suffer a massive cut, Hockey will now allow vice chancellors to charge students whatever fees they like. Government contributions to HECS will shrink and repayments will start earlier and at a higher rate.

• Over the next decade the budget tears out $80bn funding to the states for hospitals and schools. This is a arrant attempt by Hockey and Abbott to push the states into agreeing with increasing the unpopular GST. The Coalition have now blatantly reneged on the promised Gonski funding, aggravating the widening gap between private and public schools.

• $500 million will be stripped from the Indigenous program funding in the next five years. Abbott’s ‘solidarity’ for Indigenous people will also be expressed through a $15 million cut to the National Congress of First Peoples.

• Family payments are to be cutback by $8 billion!

• Sole parents and stay at home parents are to be penalised. Parents (essentially women) with children over the age of six, with no regard to their circumstances, will be pushed and poked back into work.

• Through the use of co-payments Hockey has attacked the universal nature of Medicare. The sick will be hit with a $7 charge to see their GP, or get a pathology test and for X rays. $5 increase to the cost of every single prescription drug. This in effect is double dipping with the ‘user pay’ philosophy, because people already pay for their Medicare through the 1.5% tax levy.

• Reintroduction of the six monthly fuel excise indexation that will raise $2.2 billion. This will go to fund road infrastructure, with public transport being overlooked. In fact there’s plenty of handouts to the construction companies and property developers, with $12 billion from the government thrown their way to build infrastructure for the benefit of big business – more and bigger polluting roads (like Melbourne’s East West link), ports, railways and airports.

• A deficit tax will be levied for three years of 2% on incomes of over $180,000. This to feign the impression that all (rich and poor alike) must share the burden of the debt crisis, and predictably was disapproved by the likes of Tony Shepherd from the Audit Commission and Business Council.

• To make co-payments more palatable finance raised from them will go to a dubious Medical Research Future Fund, which will receive $20 billion by 2020.

There is money to be had but it is in the wrong hands. Governments could quite easily redress their revenue problems by making the RICH PAY! For example a proper Super Profit Mining Tax of 40% on all minerals, with a fixed state royalty and a change to depreciation would collect $35 billion straight away.

They could also look at permanent options like trusts, superannuation tax concessions and negative gearing. The forgone tax revenue cost the budget this year $34 billion rising to over $50 billion in 2016/17.

Lets not forget the profit shifting to tax havens that multinational corporations deceitfully scheme, wealth that is produced from workers labour that is sneaked out of the country.

But of course this won’t happen, because our ‘parliamentary democracy’ is in reality just minders for the multinational corporation.

The Abbott Coalition government have just started stage one of their austerity attacks. Following stages will include increasing and extending the Goods and Services Tax (which hurt the poor and workers), more nation-wrecking privatisation and further outsourcing of public sector services, and vicious attacks on minimum wages and worker rights.

There is little faith in parliamentary parties because of their perpetual service to big corporations at the expense of ordinary people. People’s only answer is to unite, organise and fight back in their workplaces, suburban and rural communities, and demonstrate their strength in the streets.