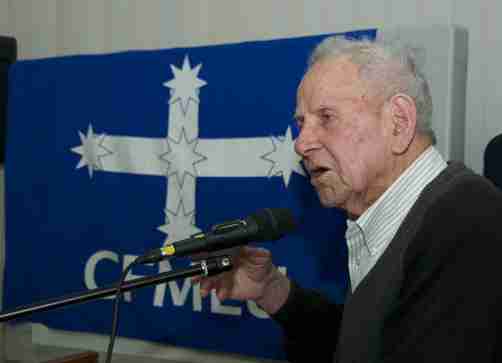 The Spirit of Eureka Award is presented in recognition of outstanding service to others in the same spirit as those who fought to end injustice and tyranny at the Eureka Stockade.

Jim was born in 1918 and during his early working life worked alongside and learned from men who had been involved in the 1890’s strikes, which played a major influence in shaping the political and economic course of Australia. Despite his age (or because of it) Jim is still politically active, attending political meetings and expressing his views as well as producing a bi-monthly news sheet, “The Plod” with news and views as to the political goings on across the country.

Jim’s acceptance speech was outstanding, never being one for not taking an opportunity to tell it as it is, Jim expressed his views on the past and the future, extolling the working class and its historical political role. He was concerned that not enough was being done to educate the younger generations in cutting through the propaganda and discovering the real truth about capitalism.

Jim received a very generous applause for his speech, in particular from the younger participants present.

The night was good reminder that far from being a fair and equitable country, which the diggers at Eureka had fought and died for, we are still a long way off.