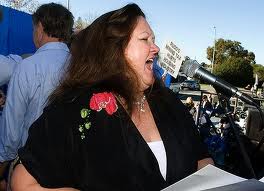 Australia’s richest woman recently took a pop shot at the nation’s ‘entitlement mentality’. Gina Rinehart warned in a recent edition of the Australian Resources and Investment magazine, “This ‘age of entitlement’ and its consequences is creating problems for all of us, our children and our grandchildren.”

This caring concern then shifted to a hardnose approach of how this problem should be solved. She waxed lyrical about Margaret Thatcher’s ‘strong’ economic policies, arguing that Australia’s political leaders should likewise cut ‘wasteful’ social welfare spending.

“Our political leaders are fortunate to have a leader they can emulate, a leader who well understood fundamental economic matters, critical for all countries and their standards of living, Margaret Thatcher took courageous decisions in the interests of Britain, despite the obvious noisy detractors,” evinced Gina.

Her other penetrating insights about the late Iron Lady included such gems as: “Margaret Thatcher took courageous decisions in the interests of Britain, despite the obvious noisy detractors. Thatcher steered through a lack of courage in her own political party, which had become riddled with lefties or ‘non-courageous wets’ and self-interested power mongrels, who didn’t grasp or didn’t want to grasp what was needed for their own country.”

Data from The Australia Institute show that if tax concessions provided to mining companies were included, the amount of subsidy would be almost ten times that figure. The Australian institute states that the mining industry has so many tax concessions, in effect it has one of the lowest corporate tax rates – the mining industry pays only 14%, whereas the average is 21%.

Overall the mining industry gets four and a half billion dollars a year in subsidies, whereas the now extinct the car industry was getting about half a billion dollars a year. No doubt Gina would happily contribute to end the ‘age of entitlement’ by giving up exploration and prospecting deductions, which increased by $220 million on last year while deductions for capital works expenditure rose by $127.5 million.

Then there’s the rise in fuel tax credits to the industry which went up to $458 million, which Gina and her mining backers could hand back. Lets not forget the state-based subsidies and concessions and the Federal Government shelling out for the cost of rail and port infrastructure that the mining industry uses.

We’re waiting Gina for you to practice what you preach! Unfortunately Gina forgot to mention that all the riches that comes from mining are the result of mining workers providing the labour to extract, transport, process etc the ore. In other words they do all the work but she and the other mining magnates get all the profits.

Why shouldn’t they get other benefits to guarantee their livelihood – education, health, housing, transport and employment? Would you like to pitch-in Gina? After all they do all your dirty work and maintain you in a lifestyle you’re accustom to.

Good onya Gina for letting the ‘cat out of the bag’ when you stated that: “Australia should never forget, if we want the multinationals to continue to invest their profits here, we have to put out the ‘welcome mat’ and provide good business reason why they should keep investing here.” This why she is a comprador (A local who collaborates with and works on behalf of foreign businesses), for Gina believes that the mining multinationals should be given carte-blanche to pillage Australia’s sovereign resources and leave us with just holes in the ground.

Mining profits have increased by 900% in the past 9 years. In the next 5 years these giant foreign mining monopolies will send $50 billion in profits out of Australia to their corporations’ head offices, mainly in the US and Europe.

On average each mining worker in Australia creates over $1million a year in value for the mining corporations, whilst 90% of the value created by them is kept by a tiny handful of mining multinationals.

How patriotic of you Gina.

Gina Rinehart, Andrew Forrest and Clive Palmer are essentially bit players in the Australia’s mining industry. Together they hold under 5% of the sector, compared to the foreign mining multinationals (such as BHP, Rio Tinto, Xstrata, Anglo-American, Alcoa, Chevron, Shell…) who control 83% of mining in Australia. In fact good ol’ Gina gets most of her billions through a joint venture with Rio Tinto.

Gina, Andrew and Clive provided the ‘Australian mask’ for the foreign mining corporations during the campaign to stop the Super Profit Mining Tax, which unseated Kevin Rudd of his prime ministership in 2010.