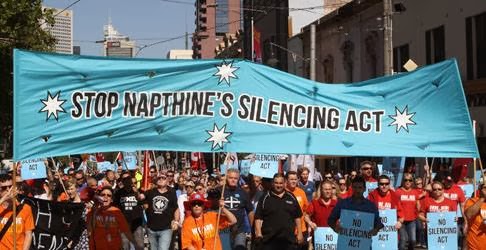 Around 4000 protestors on February 18 marched on the Victorian parliament to oppose the introduction of the amendments to the Summary Offences Act. With this new legislation the Napthine government plans to crack down on protests, pickets and community actions.

Police can also ban people from an area for 24 hours, with a penalty of two years jail by applying for an “exclusion order” from Magistrates.

Presently there are at least some protections in place around the right protest. The new laws virtually remove all of these protections.

The very physical East-West tunnel protests have been cited as the justification for this draconian legislation by the Napthine government.

However the broad range of speakers at the rally – Brian Boyd, Secretary of the Victorian trades Hall Council, Kevin Bracken, Secretary of the Maritime Union, activist Father Bob MaGuire, and Anna Brown from the Human Rights Law Centre – pointed out that this government is preparing their ‘law and order’ to stymie the upheaval that is currently breaking out in the community.

The community is rebelling against many government policies – planning issues, environmental issues, public transport issues, education and health issues are all harming the community. Widespread social discontent is also occurring as the unemployment rate rises and politicians have no answers for those out of work.

Whilst basic social services are cut back, the one thing that the politicians and reactionary governments do protect is massive profits (that are usually sent overseas) and the avoidance of corporate tax liabilities. Once people had the right to express their grievances but now it is being denied them. The attack on democratic rights will only escalate social conflict and be the catalyst for a peoples’ rights movement to develop.