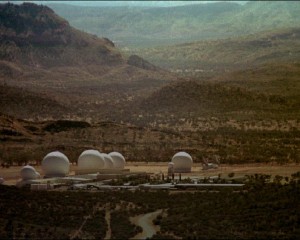 There is a tragedy hidden in the heart of Australia. On ancient, remote Aboriginal lands, a cluster of strangely shaped buildings squat in an extraordinarily remote area. For decades these buildings, and those who work within them, have silently been at the center of a killing spree.

I could use different words here, dancing around the facts, acting as though extrajudicial assassination was okay. The Governments and Agencies who commit these crimes use a different language — a softer, easier on the eye, and their conscience, language.

In that media friendly language, there must be no hint, that after decisions made on flimsy evidence, people are being murdered at the press of a button. Drones are the weapons of choice. American military drone operators are the executioners. Military Officers sit in front of computers at Pine Gap in Australia, their rooms cool and air conditioned against the harsh desert heat, supporting the alliance which carries out dispassionate and clinical murders in the name of the “freedom” of the United States of America.

For many years now, Australia has been a useful outpost for Empire. The alliance between the security agencies of Great Britain, USA, NZ, Canada and Australia primarily fulfills the needs of the USA. We are but a commodity here, nothing more. The “Five Eyes Alliance” — also abbreviated as FVEY — was built on a treaty for joint cooperation in signals intelligence.

FVEY remains the most powerful espionage alliance in world history. Both United States war, or to be polite, “political”, and economic advantage is the goal. Economic advancement of some of the member states is also a consideration, but to a lesser extent. This alliance circumvents laws in many of its member countries by acting like multinational company or business in some respects.

It is undeniable and widely acknowledged, that Pine Gap — known in the media as a “satellite tracking station” is far more than just a tracking station. For a start, it is part of ECHELON, which you may not have heard much about until Edward Snowden’s revelations. In democracies, we are entitled to know what is being done in our name. Injustice which never sees the light remains. This is the case with FVEY. A secretive, unaccountable machine is growing.

It is only recently with the debate finally sparked through the whistleblower Snowden, we can gain the beginnings of a perspective. In Australia, our media hesitates to speak truth to power where the US alliance is concerned. If they do, the Government of the day will use all means available to shut them down, or dismiss legitimate concerns. Our Attorney General just made the ludicrous assertion in Parliament Question time that Snowden’s disclosures “put Australian lives at risk.” To use an Australian term: that’s utter bullshit. Will he be called out on this? Unlikely.

Whilst a major operating NSA HQ in central Australia expands an illegal, immoral, global surveillance program, potentially making anyone in range the mistaken target for assassination, Edward Snowden receives the same treatment as Australian Julian Assange. The focus is then off the message, but onto the messenger. Where are the international forums, the mechanisms, for exposing and bringing to justice Governments and Government Agencies which break the law and violate the rights of their peoples? They are few and far between.

Jeremy Scahill and Glenn Greenwald writing at The Intercept have just written about the NSA’s secret role in the US assassination program. The implications of this must be more widely debated by the citizens of those countries which host the FVEY’s Echelon bases. We are complicit, through our Governments, and a silent media, in allowing war crimes, and illegal surveillance.

Wikipedia is a changing, living encyclopedia. Look up “Five Eyes.” Look up “Pine Gap.” The writers of each article are different — the Pine Gap article is more heavily censored. When one realizes the extent and size of the Central Australian NSA facility, then the questions which are never asked must be spoken aloud. The debate which has been shut down must start up again. What are we allowing in our name? Who has died, in a drone strike, powered by machines and I am alleging here without hesitation, by people here in Australia.

These US military personnel on high intensity rotation through that facility are not just “monitoring” satellites. They could well be, on direct orders from the US President, killing someone they will later name a “terrorist”, not authorized by an international court of law, but by one of the growing regimes which labels any opposing group, even non violent ones, as terrorists. They are, without doubt, part of the US Cyber command engaging in monitoring in depth the communication of innocent civilians. We are all being watched, our data recorded, our images captured multiple times a day.

And we are a world at war. Atrocities become acceptable, as language is manipulated to fulfill the needs of the Generals. “Clinical strikes” are excused as some kind of humanitarian execution. Law has no voice in these wars. International borders have no standing. Governments who oppose are corrupted by stealth, United Nations agreements are held in contempt by the new arbiters of self defined justice.

The evil center of the surveillance machine is the murders and false imprisonments resulting from flawed machine gathered intelligence, assessment and action. The rules of war are imposed on all of us now. Chilling implications are behind many of the extrajudicial assassinations carried out by the USA. You swapped your telephone sim card with an Enemy of the State unknowingly?

There is no discussion in the public domain on what is actually occurring at Pine Gap. Classified. Top Secret. Hidden. We know this though: it is injustice on a massive scale. It is highly likely to be considered criminal in International Courts of Law. How though, can we find out? War censorship is a dangerous thing. People need truth.

There must not be only “ The Day We Fought Back.” This must be the time we fight back until the changes we want come about. Concerted, clear, non violent popular resistance will bring about change. We cannot allow the dissent within and between activist groups to be louder than the voices we raise together to demand a create a better future.

For what is being created, hidden, in the heart of secret spy bases around the world must be stopped. And it is up to us.