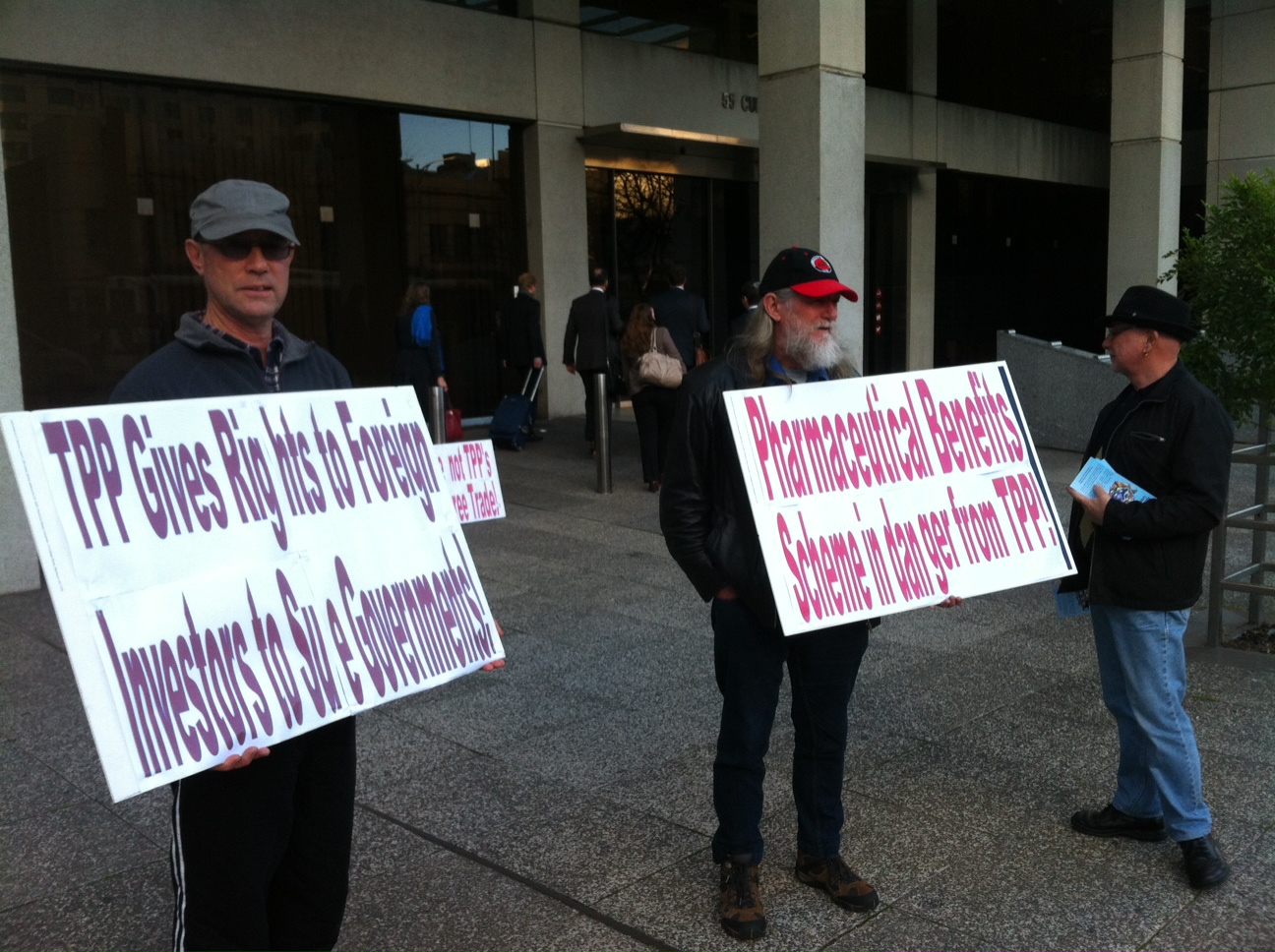 Protest against the Department of Foreign Affairs and Trade hosting a TPP consultation meeting in Adelaide, Thursday 27 June.

by Spirit of Eureka (Vic)

The Australian government is about to sell out the last vestiges of Australia’s sovereignty and national independence by signing up to the US-driven Trans Pacific Partnership (“Free Trade”) agreement.

TPP will get rid of the few remaining regulations and restrictions that protect local jobs, working conditions, industries, agriculture and food production, public and community services, health and education services and open up more local markets to domination by overseas corporations.  The US government wants to get rid of Australian government subsidies on local medicines (Pharmaceutical Benefits Scheme) to clear the way for its multinational pharmaceutical giants to push their expensive drugs in Australia.

The US government is demanding “investor rights” in the TPP that give power to its multinational corporations to sue sovereign governments.

Hot on the heels of the US-Australia Free Trade Agreement signed in 2004-5, this second grab on behalf of large US corporations and financial institutions will wipe out most of  the “regulations and controls” standing in the way of multinationals plundering our services, industries, resources and markets.

Some of these “controls” are crucially important for the protection of our working conditions, job security, local agricultural and manufacturing industries, health, education and community services. They are things that have been fought for and achieved through vision and popular action by the people over many decades.

No More Privatisation and Outsourcing of Jobs and Services

The TPP will open the way to more privatisation, outsourcing of public services and contracting out to foreign corporations.  The cost of living for the people will go up.

US and multinational corporations will have even more control over Federal and State governments’ economic policies, and laws, and the people will have even fewer democratic rights.

US economic interests are already established in Australia.  US political influence already dictates many of Australia’s economic and foreign policies. The TPP will only further entrench Australia’s dependency on overseas corporations and financial institutions.

Many Australians are disturbed and anxious about the sell-out of our country in the name of globalisation and “free trade”. Sure, we need to trade with others, but on the basis of FAIR TRADE, not open slather for powerful multinational corporations to walk all over us.

Australian governments should stop pandering to US economic, political and military objectives, stop turning Australia into a branch of the US. They should try saying “NO”.

The Australian people will react with anger and dismay when they see hard-won achievements and social services, national assets dismantled and swallowed by the profit hungry multinational corporations. Send the government the message now!

For a Democratic, Sovereign and Independent Australia!