On 11 December No Nuclear Subs Sth Aust in conjunction with National Day of Action held a their rally on the steps of Parliament House. This speech was given by Stephen Darley, Convener of IPAN-SA and a member of Spirit of Eureka (SA). 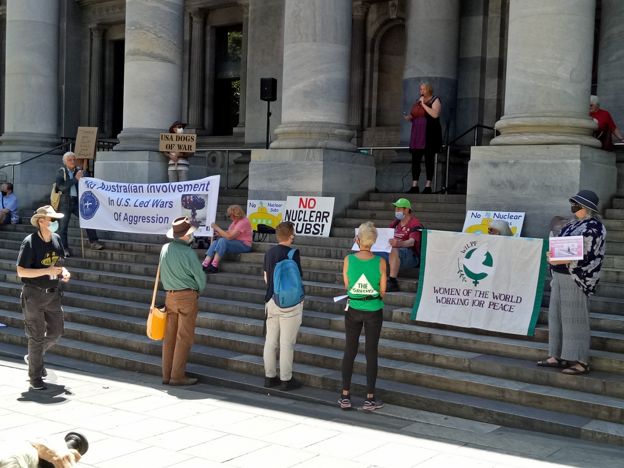 So what does AUKUS actually stand for? It stands for lies and hypocrisy, and further build-up towards war with China – all in the name of security! It started with the lies to the French about the old sub deal – but it soon topped that. Remember we were told the government would take 18 months to discuss and refine the AUKUS pact before proceed-ing to develop it? Well that lie was exposed very quickly – the Exchange of Naval Nuclear Propulsion Information Agreement was signed on the 22nd November — a legally-binding arrangement granting Australia access to advanced nuclear technology under the AUKUS deal. Other speakers will expand on what that agreement means – but it was a concrete development of AUKUS.

Of course AUKUS as a name contains a distortion – despite the nuclear-powered sub visit last month, the British will not be committing any substantial part of their naval forces to this part of the world. After all, they are helping to advance the prospect of war with Russia over the Ukraine and NATO – and the pitiful remnant of the British empire is basically confined to their earliest conquests in their disunited kingdom. They need the bulk of their navy close by.

So, is AUKUS ANZUS with an update? Well, New Zealand/Aotearoa only clings to ANZUS by the tips of their no-nuclear fingertips. And they are not participating in the reckless confrontation with China that Australia is enthusiastically joining. Now some argue that Australia is leading this charge – but I don’t accept that. Sure, the US is happy to let their southern lapdogs take the heat at times, especially when it involves Australia losing billions in Chinese markets which mostly US corporations then pick up – the latest sector being Liquid Natural Gas.

But there is no doubt about the basic continuity of US foreign policy against China, from Obama’s pivot to Asia, through Trump to Biden. (Note:  a record military spending bill of $778 billion just passed the Democratic-controlled House of Reps) The US just aren’t quite as ham-fisted about anti-China diplomacy as Morrison and Dutton – who appear to be in a competition to see who kow-tows the lowest to the US. Dutton signing a blank cheque regarding war over Taiwan was hard to top – joining the US diplomatic boycott of the Olympics in China within one day doesn’t have the same kudos.

But think of the enormous hypocrisy involved in claiming that was about human rights! China is no white knight in that regard – though there is a lot of hysterical exaggeration about Hong Kong and Xinjiang. But what of the US record? Ask the people of Guam, 1/3 of their island turned into a military base; ask the Chamorros expelled from Diego Garcia to build a major US base; ask the South and Central American peoples about decades of support for murderous regimes.

And then there’s the Middle East! Ask the Iraqis, Iranians, Syrians and others about US human rights standing! Ask those under the oppression of close US allies and weapons recipients like Israel, Saudi Arabia and the UAE – ask the Palestinians! Ask the Yemenis, subject of the greatest current humanitarian disaster on earth! And yes, despite almost dropping out of the news, the war, blockade and starvation continues there. Last but not least, look at the US itself – for instance, with the biggest prison population on earth – over 2 million, ¼ of the world total. And they are all subject to forced labour – much of the remaining US manufacturing industry is prison-based. This is a form of modern slavery.

AUSMIN – the mid-year talks where the US hands out its orders to Australia’s Defence and Foreign ministers – set the basic geo-strategic and military and political direction for Australia. And this year they led to Australia surrendering what independence and sovereignty they had. AUKUS is a result of that, as is the nuclear subs proposal. On top of that though are increased US warship visits, bomber and marine rotations, and cyber/intelligence operations.

The warships and the bombers will mostly be nuclear-capable, and therefore nuclear-armed – the US doesn’t send ships around the world without their most potent weapons in case of an emergency (aka a nuclear war). And another lie is that Australia accepts the US refusal to confirm or deny nuclear weapons being on board – and our government therefore pretends (lies) that there are no nukes in this country.

In fact at some possibly near future date, US intermediate range missiles, capable of reaching southern China and quite probably nuclear-armed will be stationed in the Top End. China never signed the Intermediate range Nuclear Forces treaty (it had none when first signed in 1987), and the US withdrew from it in 2019, followed by Russia in response. These where the missiles that sparked the massive resurgence of the peace movement in Europe in the early 1980’s, and now we are back where it started. Will we have a Greenham Common protest in Australia? Millions marched in Europe then, but also hundreds of thousands in Australia. We need that spirit now, to oppose AUKUS and eventually, inevitably the US alliance – in a world with the uncertainty of the pandemic, the enormous uncertainty of advancing climate change, we cannot afford, monetarily or socially, to live under the uncertainty of war between major powers, and the grim certainty of nuclear annihilation. We can stop it, we must stop it!