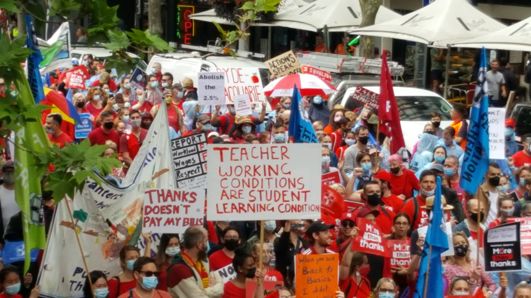 Striking NSW public school teachers filled Macquarie Street Street on 7 December. The rally of over 15,000 unionists at NSW Parliament House was part of the first strike of NSW Teachers Federation members in almost a decade.

Teachers dressed in red t-shirts emblazoned with the campaign slogan More Than Thanks gathered at Hyde Park North before marching to make their anger and grievances known to the NSW government. Teachers from across the state spoke from the stage of their frustration with serious teacher shortages, unsustainable workload and a salary that is not attracting or retraining enough new teachers to guarantee qualified teachers in every classroom.

With over 1,000 unfilled permanent teacher positions and schools across the state battling each day to find casual teachers to cover those who are sick or on leave, the NSW Teachers Federation has been campaigning to raise salaries and improve working condition of teachers to solve this shortage. With 200,000 more students projected to enter the NSW public system over the next 20 years, the teacher shortage leaves public education in NSW in a dire situation.

The current Award for teachers expires at the end of this year, and the Teachers Federation has worked to secure 5-7.5% salary increases over the next two years of a two-year Award and an increase of two hours per week of lesson preparation time for teachers. While the work of teachers has become increasingly complex, NSW teachers have not been given any increase in preparation time since the 1980s in the case of primary teachers and the 1950s for secondary teachers.

However, after almost a whole school term of negotiations, the Department of Education has failed to offer anything acceptable to NSW teachers.

The demands of the Teachers Federation are supported by the recommendations of the independent Gallop Inquiry into the work of teachers, which were released in February this year – the first such inquiry since the work value case of 2004. Teachers are currently unable to make such work value cases in the NSW Industrial Relations Commission. Their salary increases are capped at 2.5% under current public sector wages policy and legislation. The campaign, which saw numerous short wildcat strikes in schools recently, is an attempt to break through this legislation. 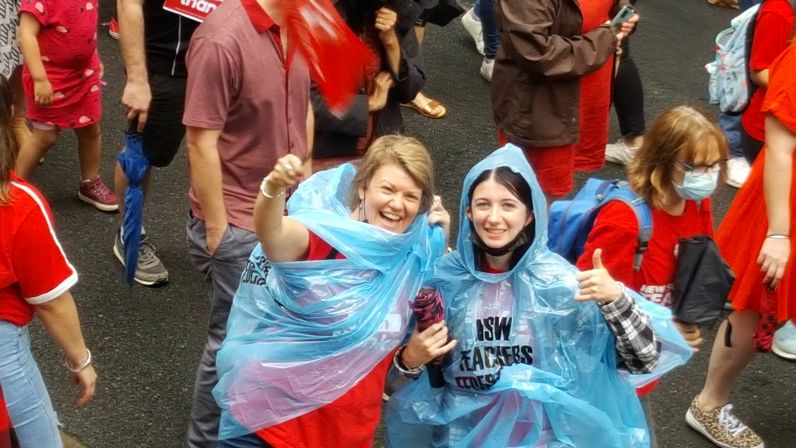 The strike action enjoys widespread support among other unionists and the general public, including parents. The Rail, Tram Bus Union were also taking action that day against the privatisation of train operations in NSW, refusing to operate non-Australian made trains. Reports of messages of support broadcast by RTBU members over train PA systems on the day are widespread. This writer can confirm that an RTBU member spoke to passengers over the PA on a train returning many rallying teachers and members of the public home explaining the RTBU industrial action and struggle against privatisation and urging support for the teacher’s action.

Comments by the NSW Education Minister, Sarah Mitchell that the Teachers Federation were a “protection racket” only strengthened the resolve of teacher unionists. Similarly, emails to all teachers seeking to intimidate and sow division by the NSW Department of Education Secretary Georgina Harrison in the lead up to the strike galvanised teachers.

The COVID-safe rally of thousands of masked teachers in red t-shirts is a massive achievement for teacher unionists in NSW. It serves as an incredibly significant win in the public education struggle and sends a clear, strong message to the NSW government and the Department of Education of teacher unity and resolve and will serve to continue to mobilise and inspire teacher unionists in the ongoing campaign.