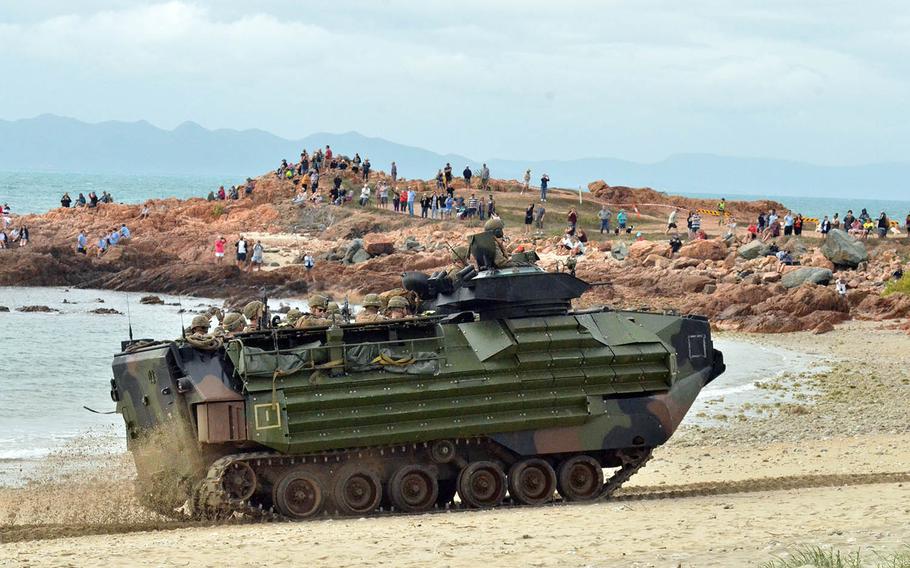 The 2021 US-led Talisman Sabre military exercises have revealed some fascinating insights into the changing balance of forces taking place in the Indo-Pacific region.

Military incursions into make-believe islands together with liaison with local civil and emergency service provision leave little to the imagination about the state of mind of US-led military planners based in the Pentagon.

The rise of China has had a dramatic impact upon the Indo-Pacific; the serious challenge to US traditional hegemonic regional positions was a played-out with the US-led Talisman Sabre 2021 military exercises during July and August. After dislodging Japan as the world’s biggest economy, China has continued to advance and may well eclipse the US position later this decade or in the early 2030s.

It has resulted in commentary from Canberra about the changing balance of regional forces which included Prime Minister Scott Morrison announcing that ‘the world has changed … this has required us to sharpen on our focus on our region and enhance our capability’. (1) Increased Australian defence budgets have become the order of the day, as has been the case with other US allies as they prepare for ‘real-war scenarios’.

As one US-led military exercise finishes, another invariably begins soon after in an escalation of military activity and diplomatic hostilities toward China. It has also resulted in Cold War politics across the region where massive surveillance of entire populations has become commonplace.

The US-led Talisman Sabre are regarded as one of the most important regional military exercises and included 17,000 personnel from seven countries: Australia, the UK, Japan, Canada, the ROK, New Zealand together with the US; the group also used 18 shipping vessels, 70 fixed wing aircraft and 50 helicopters. (2)

And it would, therefore, appear quite in keeping for the planning with the whole military exercise to be based in northern Queensland, an area of Australia facing the southern part of the Pacific, an area where China has increased its soft diplomacy in recent years with mutually beneficial trade with small nations including: PNG, the Solomons, Kiribati, Tuvalu, Western Samoa, Vanuatu, Fiji, New Caledonia and Tonga, together with as multitude of small island masses which straddle sensitive shipping-lanes.

The fact many of the Pacific nations have large ‘exclusive economic zones’ (EEZ) has resulted in small countries having considerable regional influence. Kiribati, for example, has a land mass of 811 square kms. Its EEZ, however, is 3,437,132 square kms, a total of 4,238 times its land-mass. The Solomons, likewise, has an EEZ 56 times larger than its land-mass. Their strong diplomatic links with China has seen a dramatic swing against the US in recent years. (3)

Some small Pacific nations also have a sensitive strategic significance. As China has extended its regional diplomatic links, it has in turn, created an opportunity for their surveillance of US defence and security facilities.

Kiribati is strategically located around the equator with three areas in its massive EEZ: the Gilbert Islands, the Phoenix Islands and the Line Islands. The Gilbert Islands neighbour the US-controlled Marshall Islands which host the Ronald Reagan Ballistic Missile Defence site which includes their space surveillance radar system called the Space Fence; the $1.5 billion system has the capacity for satellite-tracking in low orbit. (4)

Wake Island, a US-controlled territory located north of the Marshall Islands, together with the Japanese-controlled Minami-Torishima, host sensitive military facilities for the A2AD system. (5) Christmas Island, only 2,000 kms from Hawaii and the centre of INDOPACOM, also host a space-based radar system for ‘tracking global threats’ together with another high-frequency radar system based in Palau used for detecting air and surface targets. (6)

The recent Talisman Sabre military exercises were part of the US-led response to the perceived problem of China increasing its regional diplomatic influence.

The US-led military thinking is also not solely confined to the Indo-Pacific; a recent military assessment by General Stephen Townsend stated Beijing had already created a strategic ‘network of ports and fortified islets in recent years, and was planning to ‘build a network of naval facilities to enable its submarines, carriers and escort ships to put pressure on US and NATO navies beyond the Pacific region’. (7) Fears that China was planning port facilities on Africa’s western coast has sent shock-waves into the heartlands of the Pentagon by challenging traditional US hegemonic positions in the South Atlantic. (8)

It is, therefore, entirely in keeping with their narrow-vision and paranoid perception of global politics to find the recent US-led Talisman Sabre exercises included a counter-insurgency/counter-intelligence manoeuvre, noted in official correspondence as a ‘realistic scenario to hone their interoperability at every level’ of those participating. (9)

A total of 650 military personnel landed on Forest beach near Ingham in northern Queensland to re-capture territory occupied by a large force of North Torbians, ‘a near peer enemy with comparable air, ground, maritime, space, and cyber capabilities’. (10) During the manoeuvre US-led personnel re-captured the local airport, key terrain including bridges, inter-sections, and power infra-structure, creating multiple problems for the enemy to deal with at once’. (11)

It was noted in official correspondence that the area had been chosen ‘for the purposes of the amphibious exercise … Ingham and its surrounds are cast as an island … and that … it’s a potentially realistic scenario’. (12)

Reference in official media releases to ‘intelligence architecture to try and anticipate what they are going to throw at us and to out-manoeuvre them’ revealed prior counter-intelligence operations to assess ‘North Torbian’ influences in and around Ingham, which no doubt, kept local Police and the Emergency Services together with private security organisations busy in the lead-up to the main operation. (14)

Recent moves to increase class and state power, at all levels of society, rest upon a pattern of military counter-intelligence thinking which has become commonplace in present-day Australia and in line with the US-led militarisation of the Indo-Pacific.

Throughout the entire Talisman Sabre military exercise there was also no ambiguity about the designated role of Australia with US-led regional military planning; HMAS Canberra operated command and control platforms for the naval task-forces and was the floating headquarters for the landing force. It was, furthermore, noted HMAS Canberra together with HMAS Adelaide, were the ‘key to Australia’s ability to deploy land forces anywhere in the region, in war-time or peacetime’. (15)

The recent Talisman Sabre military exercises were not meaningless war-games but more in line with a trial-run for US-led military incursions and occupation of land-masses in the Indo-Pacific and elsewhere considered strategic for ‘US interests’.

In conclusion, we live in dangerous times with the increased likelihood of real-war scenarios taking place: We need an independent foreign policy!