July 4th Rally for Peace – No War with China – No Australian Involvement in U.S. wars

William Briggs spoke as a member of IPAN (Victoria) at the 4 July rally held in Melbourne, Queen Victoria Market. 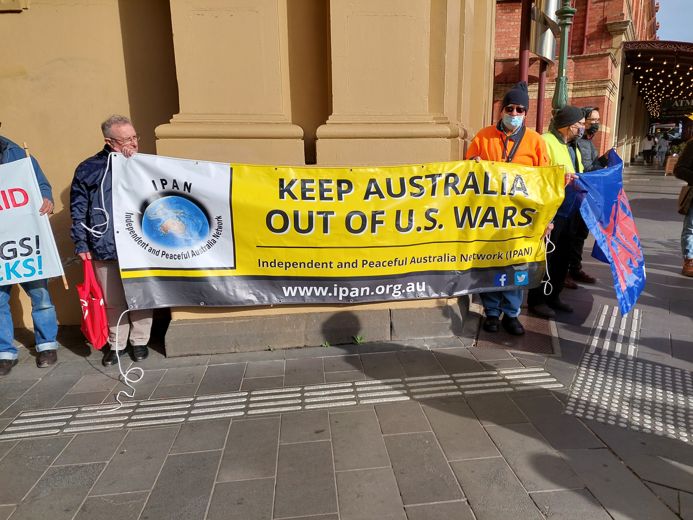 China is not a threat! The US might declare China to be an enemy, a threat and a nation that must be confronted. Our government might be just as belligerent, but it doesn’t make it so. At the same time, the media have been doing all in their power to whip up an anti-China hysteria.

The rally slogan is No war on China!  How did China become the enemy? How did we get here? Just seven years ago Xi Jinping was addressing the Australian parliament about the benefits of goodwill, friendship, and free trade and yet today just 16 per cent of Australians have any confidence that China will behave responsibly in the world and 90 per cent are concerned about China’s military activities.

All of this is disturbing but the question remains – why? Why has China been declared public enemy number 1? Why is there such heightened tension? Why is war being openly discussed? It’s not because China is some ideological foe. It’s not because China is expansionist or militaristic. It’s because China represents a real and present danger to US economic power. When Mao came to power, the USA wasn’t particularly concerned – neither about Mao nor his rhetoric. There was no real concern about the ‘great leap forward’ or the cultural revolution. China was not considered a threat, even as the cold war raged.

The world shifted in the early 1970s. Economic crisis struck, and profitability plummeted. The solution was in rapid globalisation and a move to cheaper wage regimes. This was a happy coincidence for China who was launching a campaign to open to the west. China became the workshop of the world. It was a saviour of economies. It was no threat. Things began to change as China became successful. It became a boom economy. It learned from its teachers and learned well. It began to challenge America as an economic force.

China became a threat, not because of ideology, not because of the force of arms, but because it was better at capitalism than the USA. The United States firmly and sincerely believes that it can defy political and economic gravity, will rise and never fall, and it will defend its position of power.

There is no pretence about the aims and motivations of the USA in the region. The head of the US Indo-Pacific Command recently declared that “We absolutely must be prepared to fight, and win should competition turn to conflict.” It is producing low-yield nuclear weapons and is openly talking of winnable nuclear war. The US has launched its Pacific Deterrence Initiative which is providing a network of missiles in Taiwan, Okinawa and the Philippines that directly target China.

China is, understandably, anxious. Washington severed diplomatic relations with Taiwan in 1979, recognising the legitimacy of China’s claim to Taiwan, but continued to supply Taiwan with ‘defensive’ weapons and pledged to support the island in the event of a conflict. What is now happening is that conflict is becoming a reality and so, the USA can ‘legitimately’ intervene. The Pentagon has given a time frame for war within six years.

The people are being prepared for just such an event. The media and too many in academia are working feverishly, in time-honoured fashion as soolers-on, as fear mongers, who shift people’s focus from trust to fear. Australian political life and history has been built on fear and the fear of China has never been far away. From the days of the gold rushes, to the xenophobia of the Bulletin magazine, to khaki elections and yellow peril posters to sway voters, we have learned to be afraid. China is no threat. It never has been.

China’s military build-up is real. Its power is real. Its capacity to defend itself is real, and so is its fear that it is under direct threat from the United States. The USA and its allies consistently point the finger at the threat that a rising China poses and, after all, a lie, told well enough and repeated often enough gains a certain traction. It is a simple matter to see where China’s army, navy and air force are stationed. It has no missile barrages in Mexico that target Texas. Northern American cities are safe from missile strikes from Chinese forces in Canada and yet US missiles are just minutes flying time to major population centres in China.

There is a threat to peace and economic security, and we all know the source of that threat.

No war with China. No subservience to the USA.