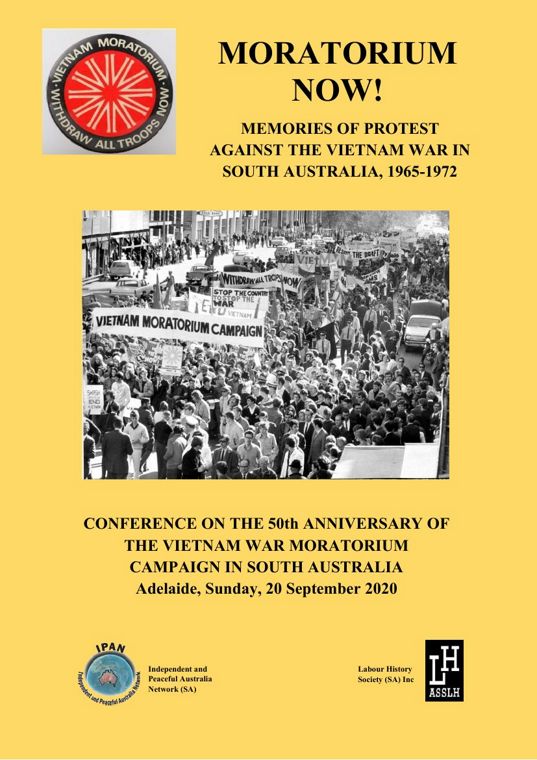 This timely publication of the acts of a 2020 Adelaide conference celebrates the 50th anniversary of the September 1970 Moratorium March through Adelaide.  This was the peak moment of anti-imperial resistance to the Vietnam War in South Australia 1965-72.  A mass political stratagem born of the initial minority status of opposition to the war, the movement made current and fashionable a latinate word in calling for a pause to the fighting in Vietnam.  It is typical of Adelaide’s political culture, vibrant since `systematic colonization’ in 1836, that South Australia, admittedly less Covid-challenged than other States, has hitherto been the only one to commemorate these years of protest.

Moratorium Now! adopts an exquisitely relevant historical perspective, respecting the past in the present with a weather eye on the challenges and opportunities of the future.  The South Australian individuals and organizations mentioned within this indispensable volume, validly contributed to the political termination of the war.  For as Von Clausewitz famously laid down in the 19th century, war is as much a political as a military exercise.  As such Moratorium Now! Memories of Protest Against the Vietnam War in South Australia 1965-72 is a gift from the boomer generation to the youth activists of today, mobilizing around such issues as climate change.  It details the strategic and tactical measures which worked during an international crisis alongside those which were arguably less successful.  The movement against the war achieved many of its objectives, but not all. Australia remains, for example, shackled to a belligerent American alliance which has long ceased to be in our national interest.  With wisdom highlights in their hair, the young activists of yesteryear afford a bequest of seasoned experience.  This is a priceless political patrimony for deployment into the necessarily altered circumstances of the future.

At its core Moratorium Now! emphasizes the depth, diversity and strategic orientation of the Moratorium movement around timely, broad church politics with revolutionary implications, which set up the creative tension around its counter-veiling tendencies.  This is a constructive contribution to the historiography of the period.  The interpretation is delivered by first class production values, due to the meticulous editing of Don & Lyn Longo, who have buttressed the reflective testimony of participant observers, prominent youth activists in the day, with a restrained, articulated critical apparatus of notes for those not familiar with the era.

Foremost amongst these witnesses are Lyn Arnold and Greg Stevens, exponents of the mainstream of the movement.  Judy Gillett-Ferguson attests to the often under-emphasized role of women, such as the crucial Save Our Sons collectives and the Women’s International League for Peace & Freedom, born of opposition to the Great War.  Draft resister Mike Willis still stands to the Left of the mainstream. Bill Dowling’s views have become more mellow and critical with age. This kaleidoscope of perspectives generates a nuanced account.

Moratorium Now! is an indispensable tool for the historically aware activist. It retails at a modest $15.00. It can be obtained through the sponsors of the conference and the publication; the Labour History Society (SA) & the Independent & Peaceful Australia Network (SA).