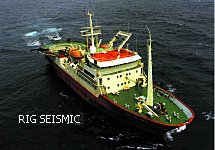 In this submission to the Senate Economics Reference Committee, Professor Clinton Fernandes contends that Australia has given away its valuable energy resources to foreign-controlled corporations for no return. He argues for a 4 point strategy to wrest back control of the nation’s energy resources so the benefit stays here for the Australian people. What Fernandes explains in his submission highlights the fact that Australia has an appalling history of comprador behaviour by the country’s political leaders. Not surprising when virtually all of them go into direct service of multinational corporations at retirement and are well remunerated for their Faustian service.

Dear Secretary,
Thank you for inviting me to make a submission to the Committee. I support the intent of the Bill to broaden the objects clause of the Offshore Petroleum and Greenhouse Gas Storage Act 2006.

In her second reading speech, Senator Hanson states that “Australia’s offshore oil and gas is being given away for free…”1 I can add details that show how the Australian public has given a massive financial windfall to oil and gas corporations by funding geological surveys and petroleum resource studies and then – via the government – handing it over to small groups of people in control of vast concentrations of wealth and influence.2 The relevant background is as follows:

Beginning in December 1970, taxpayers paid for underwater scientific explorations of Australia’s offshore geology. Geoscience Australia, then known as the Bureau of Mineral Resources, Geology and Geophysics, conducted the Continental Margin Survey (CMS). A specially designed ship traversed nearly 100,000 nautical miles in waters between 50 meters and 4,500 meters deep.3 It trailed a proton precession magnetometer behind it to measure variations in the Earth’s magnetic field, thus allowing iron-rich objects to be detected. It had a marine gravity meter mounted on a gyro-stabilized platform to measure variations in the earth’s gravitational field. It also took seismic soundings to measure water depths. These measurements revealed Australia’s underwater structure: the locations of rifts, faults, basins, and other features. The CMS was the biggest single systematic marine survey ever done anywhere in the world, collecting geo-scientific data covering almost 200,000 square km. Geoscience Australia, as it is known today, gained a good appreciation of what Australia’s offshore area looks like. Many years of data processing took place after the surveys. It soon became clear that most of Australia’s oil and gas reserves lay offshore in the seabed under the waters.

The Continental Margin Survey was followed by the Continental Margins Program (CMP) in the 1980s. This was a huge undertaking, given the size of Australia’s continental margin: nearly 12 million sq. km. Put simply, Australia has substantially more sea floor than it does land (7.69 million sq. km).4 The workhorse of the surveys was the Rig Seismic, a purpose-built ship chartered from Norway in 1984. It had advanced geophysical equipment and advanced navigation instruments including the first Global Positioning System ever installed on an Australian or Australian-chartered ship. Its air compressors, air gun arrays and seismic streamer reels occupied 342 square meters of space over three decks. Heavy geological equipment was also on board, such as a large coring and dredging winch containing ten kilometers of wire rope with a breaking strain of over 20 tons. This winch was the largest of its kind on an Australian ship and enabled the BMR to take rock and sediment samples from the deepest part of the seafloor around Australia. The geological equipment and laboratories occupied 170 square meters of space over three decks.

The Hawke government did not require the petroleum companies to pay for all this. “Product sales are unlikely to return more than 5% of total program costs in the long term,” it noted. The overriding concern was to encourage petroleum companies to invest: “The principal benefits to Australia will be obtained from increased private petroleum exploration and production.”5

According to the Cabinet Minutes of March 22, 1988, the Treasury Department objected to all this valuable information being given away. It asked why “the Government should be willing to accept higher risks than the industry which primarily stands to benefit from any success.” It pointed out that “market failure in the petroleum exploration industry has not been demonstrated. At the least, increased industry participation in the program is warranted, and this would be best achieved by a much more substantial level of cost recovery.”6

The Finance Department also spoke up, saying it was “concerned at the lack of visible evidence of industry participation in the CMP.” In particular, it said, a “level of cost recovery well in excess of the five percent of program costs” was warranted. It was not as though the offshore exploration sector suffered from too much competition. On the contrary, the Finance Department argued, there was a “high level of industry concentration in offshore exploration” and this small sector would derive “significant benefits promised by the CMP in reducing exploration risks.”7
information/dimensions/australias-size-compared accessed January 27, 2018. 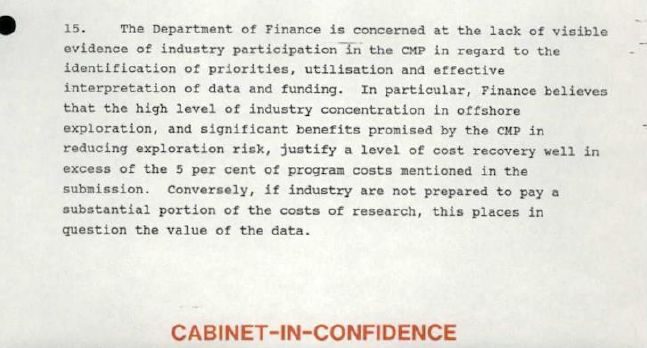 Instead, in 1988 Cabinet approved the continuation of the surveys for a further ten years, subject to review at three-yearly intervals.

These concerns, expressed in 1988, had been a running sore in the 1970s, when economist Tom Fitzgerald concluded in a report to the Minister for Minerals and Energy that the government subsidies to the mining companies were more than they paid in tax.8 In the 1974 election campaign, Prime Minister Whitlam used the report to argue that Australia was “paying to be exploited.”9 He introduced tax changes for mining companies after his narrow election victory. But his defeat in 1975 saw the Fraser government roll these changes back, and a pro-corporate, low taxing approach was entrenched.

While the public absorbed the costs and – crucially – the risks – of investment in fundamental research, the corporate sector stood to benefit from the energy riches in the continental shelf. In reality, this meant that a tiny minority of people in control of huge concentrations of capital were able to set up the North West Shelf Gas Project off the coast of Western Australia, near the Pilbara town of Karratha. On September 4, 1984, West Australian premier Brian Burke formally opened the $27 billion Project, which was operated by a then little-known company called Woodside Petroleum. It began exporting liquefied natural gas (LNG) in 1989. The Project has today become one of the largest LNG producers in the world and Woodside is one of the top 20 companies in the Australian Securities Exchange.

The Road Not Taken

By contrast, Norway made better use of the oil and gas in its continental shelf. The Norwegian government owns 67% of the shares in Equinor, formerly known as the Norwegian State Oil Company.13 Equinor’s workers elect three of the 11 directors.14 The Norwegian government created the Government Pension Fund Global in 1990 to invest Norway’s oil revenue. The Ministry of Finance owns the fund on behalf of the Norwegian people, and determines its investment strategy. The Fund had more than 11 billion kroner (more than $1.7 trillion Australian dollars) in 2021.15 This was a handsome investment for a country with 5.5 million people.

1. The Australian government should have insisted on equity in the North West Shelf Project at the very beginning, when share prices were affordable.
2. It should have insisted on income-contingent subsidies in the same way that Australian students are required to pay back their university fees once their incomes exceed some amount.
3. It should have insisted on a golden share of any future commercial opportunities arising from the project over its lifetime. These alternatives would reward inventors whilst also giving society some additional benefits.
4. If it has the boldness and imagination, the Australian government can compulsorily transfer 51 per cent of the shares into a social holding entity. It can compensate the owners via long-term bonds and share dilutions. Such an action would bring billions of dollars under public control and permit investment in much-needed national infrastructure, advanced manufacturing, energy efficiency, high technology research and development, and other forms of domestic innovation.

The above discussion of geoscience and state subsidy is not merely of historical interest. It is very much an ongoing activity. The Committee should examine the economics of Geoscience Australia’s work in the central North West Shelf. Known as the Dorado petroleum system, it comprises an area bigger than the Grand Canyon, all of it underwater. Geoscience Australia’s work has revealed vital new insights into the region’s structural architecture and hydrocarbon potential, with immense significance for hydrocarbon exploration, extraction and profits.16

It constitutes another massive public subsidy on the part of the taxpayers. Remember that the risk absorbed by the taxpayer is more important than the cost.

Although this inquiry is into offshore oil and gas, the above argument holds a fortiori for Australia’s natural endowment more generally. In 2013, Geoscience Australia conducted a study of “Critical commodities for a high-tech world.”17 It found that Australia was rich in antimony, beryllium, bismuth, chromium, cobalt, copper, graphite, helium, indium, lithium, manganese, molybdenum, nickel, niobium, platinum-group elements (PGE), rare-earth elements (REE), tantalum, thorium, tin, titanium, tungsten and zirconium. Some of these commodities are considered most critical by the EU, Japan, South Korea, UK and US. Australia should establish a nationally owned company that exercises ownership and control of strategically important minerals. It will then be in a position to increase domestic innovation and support higher value-added sectors, such as high technology research and development, advanced manufacturing, and energy efficiency. With the added heft that comes from a nationally owned company, Australia can welcome foreign investment proposals in strategically important minerals but insist on technology transfer to Australia, as well as local equity participation and training18.

All this is philosophically compatible with the spirit of Prime Minister’s speech at Sydney Town Hall on 3 October 2019, when he said, “We can never answer to a higher authority than the people of Australia. And under my leadership Australia’s international engagement will be squarely driven by Australia’s national interests… We cannot afford to leave it to others to set the standards that will shape our global economy.”19