Spirit of Eureka supports the call of the International League of Peoples’ Struggle (ILPS) for a Global Day of Solidarity for Public Health Not Private Profit. Spirit of Eureka is an affiliate member of ILPS, an international alliance of anti-imperialist organisations, and is a founding member of the ILPS-Australia Chapter.

The crisis of the global capitalist system has deepened since the outbreak of the COVID-19 pandemic. The increasing class divide within nations, the intensifying exploitation and oppression under monopoly finance capital, the rivalry of imperialist powers along with plunder, wars, militarism and fascism have all caused great suffering for the working people and the masses and made them more vulnerable to the present global health crisis and the economic failures of the system.

Close to half a century of the neoliberal regime has failed to save the capitalist system. COVID-19, one of the worst pandemics to hit the world since the Spanish Influenza of 1918 is now exposing the vulnerabilities of privatized national public health care systems and the inadequate response of the capitalist governments. The epicenter of the pandemic has shifted from China to Europe and now to the United States, the heartland of capitalism. There is a frenzied scramble for immediate financial stimulus to revive a dying economy for monopolies who have stolen everything but are now gripped with fear in the face of angry people who have nothing.

The failure of neoliberalism is evident in all continents. The global crisis that continues to linger since the 2008 depression is bound to further explode as global production and global value chains are destroyed, resulting in erratic financial collapses including commodity markets and currency markets.

Capitalism, with its profit-driven policies leading to destructive impacts on the climate and degradation of the environment, has facilitated the mutation of viruses. There was no decisive action and an absence of preparation for the pandemic from capitalist governments because of cutbacks in public services and a lack of emergency planning: and now capitalist countries are trying to hold off the lowering or ending of production for as long as they can while maneuvering to be in the best possible position in terms of competition for markets. 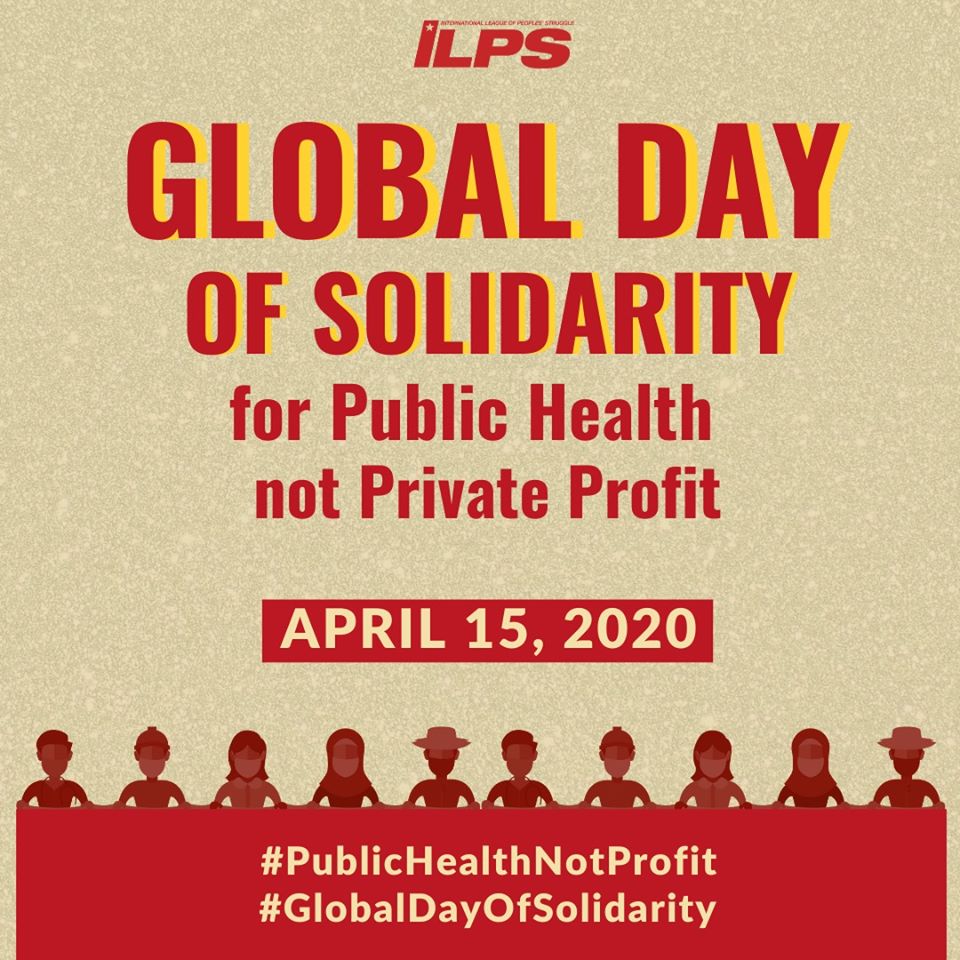 The working masses are hardest hit by the pandemic. The livelihood and health of the vast majority of the world’s population are at risk. Loss of jobs, massive unemployment and bankruptcies of small companies are taking their toll. Lockdowns and quarantine measures are enforced with an increasing use of state terror and coercive military powers, particularly against the poor. Those in the midst of civil war and armed conflict have seen greater political repression. Xenophobic and racist policies are being fanned by rightist groups.

Economic sanctions and the “war on terror”, mainly imposed by the United States on such countries as Iran and Venezuela, have worsened the situation. Efforts by China and Cuba to help in the medical response are spurned by chauvinist imperialist powers.

Despite calls by the United Nations for international cooperation, there is no solidarity between imperialist countries. We see no support from the US and the EU for Italy. Some European countries are proposing a system of debt sharing or so-called Corona bonds. Others propose expropriation of capital.

As the frontline medical workers heroically fight the disease, global solidarity of all working peoples to fight this reactionary system is urgently called upon by the International League of Peoples’ Struggle (ILPS).

We demand:
1. Guaranteed incomes and livelihood even under quarantine
2. Mass testing and treatment for all in the face of COVID-19
3. No bailout for big corporations. Bailouts for working people
4. Social protection for workers, farmers, and other toiling masses
5. Respect for democratic and human rights

We assert the socialization of wealth and health services and putting primacy on the public and the common good instead of private profit and power. Put resources towards people’s needs. Assert pro-people alternatives.

We call on ILPS members and allied networks to show our solidarity through various online and offline actions on a day of action, April 15, 2020, to express our demands. We also enjoin you to conduct study sessions on the current crisis. Let us pay attention to the welfare of the masses and continue to arouse, organise and mobilise the people and assert their democratic and anti-imperialist demands. Fight for genuine system change against imperialism and local reaction! ###