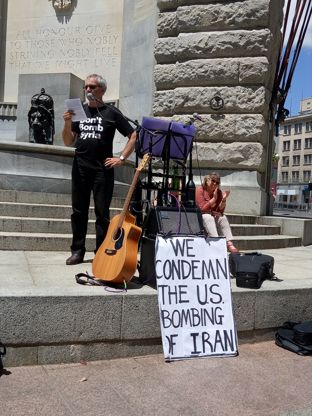 Who here has personally experienced bullying? Who of you have seen your friends, workmates, children, or vulnerable kids in the playground bullied? Bullying is totally unacceptable and we, as humane people, as civilised people, reject this behaviour in our communities without hesitation and put in place laws, protocols, procedures and education campaigns to prevent it.

Why then, when we witness bullying on a massive scale against whole nations – as is happening right now in Iran, in Syria, in Palestine and in Yemen – why then are the leaders and media in our so-called “civilised” society deathly silent?

Of course the reason for the silence on this bullying is that the Trumps and Morrisons of this world are the bullies! Not only do they bully the people of the Middle East, but they bully and manipulate the media to prevent any real analysis or debate about the politics, ethics, and morality of what they do. Iran, Syria, Iraq and Afghanistan are sovereign nations and the US/Israel alliance, including Australia, have no right to be there at all.

Individuals like Julian Assange and Chelsea Manning who expose their war crimes and expose the US’s activities in creating, funding and arming Daesh, ISIS and other terrorist groups, are vilified, bullied and imprisoned. The legitimate leaders of the sovereign nations Syria and Iran, who have the overwhelming support of their people, are vilified as tyrants and monsters who need to be replaced by “regime change” – that media friendly term that disguises a plethora of violence, destruction and human rights abuses.

Most of you will have seen the map distributed by IPAN showing the positioning of the US military in the Middle East: 68,000 US troops (not including many thousands from allied countries including Australia) are strategically positioned as we speak, from Afghanistan in the East to Turkey, Syria and Jordan in the West.

The domineering presence of such military might, located conspicuously and illegally on the ground in these sovereign nations is one very obvious example of the extreme bullying and intimidation exerted by the US in the Middle East. There is also the threatening presence of US battle ships in the Persian Gulf, the Mediterranean and the Red Sea.

The recent barbaric assassination of Iranian General Quassem Soleimani by Trump’s US drones in Baghdad on 3rd January is an extremely violent and repugnant example of shameless bullying, designed to spread fear and intimidation to anyone who opposes the actions of the US-Israel alliance.

One of the most cruel forms of bullying which is causing severe and long-term damage to every single person in Iran and Syria is sanctions. Sanctions appear more palatable than war to armchair observers in the wealthy west, but the human cost of sanctions is enormous:
•    no medicines can be imported. In Syria and Yemen most of the pharmaceutical factories have been destroyed by US and terrorist bombing;
•    if medicines are brought in by smugglers they are too expensive for most people to buy; (Inflation levels of 1,000% or more in in Iran and Syria means that the cost of living increases more than ten-fold every year. Medication that was $1 per tablet last year is $10/tablet now, will be $100/tablet next year and $1,000/tablet the year after)
•    people can’t afford essential medical procedures and surgery, and basic medical equipment is not available; (we have many personal examples of Syrian people who cannot afford essential life-saving surgery)
•    increased cost of food is causing malnutrition and stunted growth, particularly in infants. Many thousands of infants have died in Syria because of shortages of infant milk formula;
(Remember Madeleine Albright was proud of causing the deaths of tens of thousands of infants in Iraq through sanctions in the 1990s: “It’s a very hard choice but we think the price is worth it”)
•    families cannot rebuild housing that has been damaged by US and terrorist bombings;
•    schools don’t have basic facilities like pencils, paper, books, chairs or desks;
•    people can’t afford fuel to run cars or local industry;
•    because the US has blocked the Syrians from accessing their own oil, the electricity supply for hospitals, schools and homes is very unreliable and many people have literally frozen to death in the winter.

This human suffering, which is caused directly by the bullying US foreign policy ane which is fully supported by the Morrison government, contravenes just about every one of the 30 Articles of the United Nations Universal Declaration of Human Rights, but in particular these governments turn a blind eye to the following five:
•    Article 1: All human beings are born free and equal in dignity and rights…. and should act towards one another in a spirit of brotherhood [and sisterhood]. IGNORED.
•    Article 3: Everyone has the right to life, liberty and security of person. OVERLOOKED.
•    Article 5: No one shall be subjected to torture or to cruel, inhuman or degrading treatment or punishment. REJECTED.
•    Article 25: Everyone has the right to a standard of living adequate for the health and well-being of themselves and their families, including food, clothing, housing and medical care. DISMISSED.
•    Article 28: Everyone is entitled to a social and international order in which the rights and freedoms set forth in this Declaration can be fully realized. EVADED.

These principles of human rights are conveniently dismissed by the bullying western leaders to protect their wealth, to control the oil, gas and mineral resources of the Middle East, and to protect the wealth of the big corporations and arms manufacturers.

How do the sanctions work? How does the US/Israeli/Western alliance get away with it?

If you’ve ever done a money transfer from your bank account to someone’s bank accounts overseas you’ll know about “SWIFT” codes. “SWIFT” is the acronym for Society for Worldwide Interbank Financial Telecommunications, which is the predominant system for global financial transactions. It is a vast financial communications network which operates using the US dollar and over time, what started as an international system based in Europe, has become totally controlled by the US.

In 2001 the US saw an opportunity to use the SWIFT system in their so-called “war on terror” and since then the US government has gained greater control over the system. Now they can impose sanctions and, without consulting anyone, cut entire countries off from receiving financial payments whenever they choose. Countries and businesses that object to the sanctions remain silent because they are fearful of having sanctions applied to themselves and being unplugged from the main world trading system.

This is how the US creates a climate of fear to get its way in the world. And when individuals or nations stand up against them, they are demonised, bullied and cut off from the financial system. There are countries who oppose the sanctions and oppose the US bullying including Russia, China, Cuba and Venezuela but they haven’t yet implemented a financial system that can compete with the dominant system based on the US dollar. We hope that day will come soon.

The courage and determination of the people of Syria, Yemen and Iran is truly inspiring. We speak about peace, justice and human rights here with little risk to our comfort, but these courageous people have fought for peace and justice for decades and it costs them their lives. They refuse to allow the US and their terrorist proxies to take over their land and take over their deep cultural heritage which goes back thousands of years. The Iran/Syria/Yemen/Palestine axis of resistance has strengthened in the face of western bullying which is a great tribute to the courage and dignity of these people.