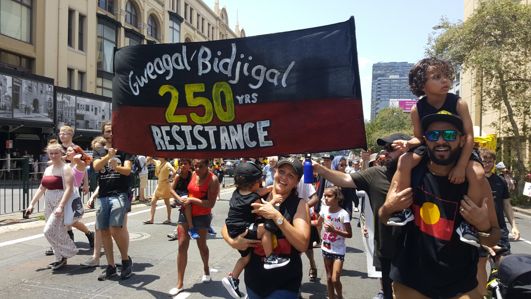 January 26 has become a day to take stock.

British Captain Arthur Philip did not land on what became Australia on January 26. As historian Humphrey McQueen points out, numerous other dates have been celebrated as founding days.

In this year’s Sydney Festival, Iron in the Blood by Jeremy Rose, told in music, film and spoken words, the history of class brutality he’d learned from Robert Hughes’ The Fatal Shore. Hughes’ history of the British colonies more than rivals Game of Thrones in its brutality. This history is absent from the narrative most hear on January 26

It shows the class warfare flowing alongside First Peoples’ armed struggle against colonisation.

No wonder corporate inheritors of invasion increasingly use January 26 as a tool for deceit and division.

For First Peoples of this continent and its islands, January 26 is a focal point for deep anger at ongoing invasion, of mourning for terrible losses and of defiant celebration that – despite everything the ruling class has thrown at them since 1788 – First Peoples have survived.

The Northern Territory Intervention in its 13th year, remains both a massive land grab for the fossil fuel industry and an experiment in hidden suppression, of which few non-indigenous Australians are even aware.

Across the continent, a flood of forced child removals and ongoing murders in custody takes that which is most precious from families, with routine indifference.

Yet there is struggle! Suppression meets resistance, most powerfully seen as Warlpiri mobilised against state murder in Yuendumu. Young took their Elders’ lead, using social media to arouse immediate protests around the country. THAT story is far from over. It links with growing movements against fracking and to bring children home.

While many First Peoples live in squalor, housing and infrastructure is built on and through their lands. But not for them.

Australia’s population is planned to reach 35 million to feed the capitalist compulsion for constant expansion. Which First Peoples were consulted? Which Australians were asked?

And who benefits? Giant developers and construction multinationals that build housing estates and high rise on what little rural areas and bushland remains in and around major cities. Infrastructure industries that push motorways into rural and coastal areas, followed by real estate booms.

The Block at Redfern was won for housing by First Peoples in 1972 after massive struggles. Back then, forty thousand First Peoples lived in Redfern. Now it’s just hundreds and more to go from the area, as high-rise public housing in bordering Waterloo is demolished.

The “Aboriginal Housing Company” is now a developer of high-rise accommodation on the Block – for overseas students. The 62 apartments for First Peoples’ – promised in return for ending the three-year Redfern Tent Embassy – have evaporated.

But First Peoples do not give up, despite despair, suicides and sellouts new generations rise underpinned by language and Law that come from Country.

Blaxland, Lawson and Wentworth followed tracks of the Gundungurra, Darug and Wiradjuri across the ‘uncrossable’ Blue Mountains, to exploit the lands beyond. Now its Gardens of Stone on Wiradjuri Country is threatened by mining. A united front of resistance grows.

Sacred trees and sites continue to be protected by the Djab Wurrung Community under threat from another road.

Fifty sacred Blue Mountain sites in Gundungurra land risk flooding as Warragamba Dam wall is raised. Why? Because governments have – for two decades – approved homes on the floodplain to the east, with 134,000 more people to settle there over the next 30 years. More resistance rises.

In the Hunter, Awabakal Women have defended Butterfly Cave and its songlines from a Roche Group housing development for eight years.

Replicate all this across First Peoples’ lands across Australia.

A world to win

But it is not just about race. It is about building unity in the face of neo-colonialism and imperialism.

No matter how the ruling class tries to divide and conquer, to plunder and suppress, to co-opt or murder, grassroots First Peoples and working Australians must come together.

No matter where their ancestors came from, rising generations – learning from, teaching and working with Elders – have millennia of culture of belonging and resilience. We have a world to win.

This article was first published in Vanguard on January 26, 2020