By John Bailey and Lindy Nolan 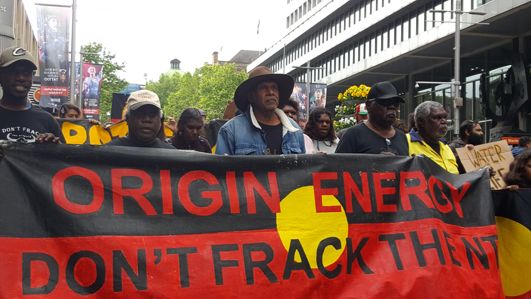 “Dozens of Elders travel 7,500km to front Dirty Origin Energy at its Shareholders Meeting in October”

On Thursday 5 December an awards ceremony took place in Sydney. The Scummos were awarded in nine different categories, with 34 nominees. They all had one thing in common. Nominees and winners were all corporations that put the need to maximise profits ahead of the needs of people and the environment.

The event provoked plenty of laughter. But there was a serious undertone. Nominees’ profits are achieved by exploitation of people and the environment we depend on for survival.

Education was once a right and a means for people to achieve their life goals. Now in a trillion-dollar online education market, British multinational Pearson Education runs NAPLAN for profit AND sells products to supposedly fix the “problems” its tests “diagnose”.  Young people need education rich in creativity and critical thinking. Pearson narrows education to increase profits.  No wonder it was Scummos’ education award winner!

Likewise, with the health award winner, Bupa. They make mega-profits from their 72 nursing homes, despite failing to provide proper care for residents. Last year 45 of their homes failed to meet health and safety standards, 22 put residents at serious risk and thirteen lost government funding. Five temporarily lost accreditation. Bupa’s profits come at the expense of their patients.

By audience boos, Dirty Origin Energy and Clive Palmer became joint winners of the Apocalypse Now! Award for the Environment. Origin wants to frack half the Northern Territory and drain the Great Artesian Basin, 6 million litres each well. Dozens of NT Elders made a 7500km round trip to tell Origin’s AGM they couldn’t be bought and are determined to stop fracking.

Meanwhile Clive spent $60 million in the Federal election to protect his massive coal projects. But worse, he said he deliberately divided the Australian people.

Despite strong competition from companies like Exxon Mobil, which locked out Longford workers for two years, and Woolworths which “accidentally” stole $300m from workers, the workplace relations award went to Uber.

Transurban won the Transport gong for treating motorists like cash cows to be milked for every cent they can get.

The Public Infrastructure prize went to Lend Lease. They pay no tax on their $16 billion profit per year. They knocked down Sydney Football Stadium and then baulk at building its replacement. Apparently $729 million isn’t enough for them.

The Terra Nullius Award for theft of First People’s lands and waters went to Twiggy Forrest and the “welfare” card he promoted, with trials run by Indue.

The company made millions charging up to $10,000 for each enforced client, on Newstart payments worth just $14,000 per year.

This humiliating card overwhelmingly targets First Peoples and aims to break their fighting spirit. It impacts on every aspect of life and leaves those forced to use the card with just 20 percent of welfare payments as cash.

You can be a non-drinker, non-gambler, non-drug taker, have managed your own financial affairs well for decades. Doesn’t matter. Your income can be managed just because of where you live. It’s coming to a suburb near you.

The smoke-filled sky’s the limit

When it comes to health and education, Governments claim to be strapped for funds. But spending on the military? The sky’s the limit.

Australia is paying US multinational and military Scummo winner, Lockheed Martin, $20 billion for fighter jets. There’s another $1.6 billion for Lockheed Martin subs and Australian Attack Force training. Our military has become a wing of the US war machine.

Lockheed was also a finalist for the Grand Scummo because there is no more horrific way to profit than by war.

The awards ceremony took place on a night in which Sydney was blanketed in smoke from bush fires engulfing NSW and other states.

This was a fitting atmosphere for the Grand Scummo Award to the Murdoch Media Empire. Just as smoke clouded vision in the city that night, the Murdoch minions and their ilk work tirelessly to cloud the vision of the population at large.

They do this through disinformation, fake news, denying climate change and putting blame where doesn’t belong.

They provide cover for all the other award winners by trumpeting the “virtues” of capitalist economics and by attacking any person or organisation that disagrees with their far-right propaganda. They aim to confuse and divide.

Especially they lie about why people leaving the Scummos, like everyone outside in Sydney that night, were forced to breathe contaminated air.