Solidarity with the people of the Philippines fighting political repression and attacks against the progressive people’s movement. 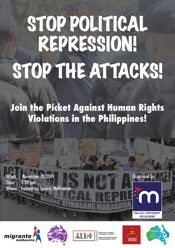 Urgent call for solidarity with the people of the Philippines to stop widespread political repression and attacks.  Sunday 10 November 4.30 pm Federation Square.

In the last few days, the US/Duterte government has escalated violent attacks and repression against the progressive people’s movement in the Philippines.  More than 62 progressive activists have been arrested and their organisations raided.

See below for the recently released statement by the International League of People’s Struggles (ILPS). Spirit of Eureka is an affiliate of ILPS.

CONDEMN THE INCREASING FASCIST ACTIONS OF THE DUTERTE REGIME, AGAINST THE

The raids and arrests of more than 62 social rights activists in Bacolod, Escalante and Manilla are the latest in a wave of repressive actions being conducted by the US-/-Duterte regime in the name of anti-communism to attack social activists and critics of the regime and its policies and actions, in a futile attempt to silence and destroy opposition to its undemocratic, inhumane and anti-people policies.

In typical Gestapo fashion the Duterte regime has used military and police to raid the offices of peoples organisations and rounded up trade union workers and human rights workers, including minors, all on the basis of trumped-up charges of being communist terrorists and with the planting of firearms and explosives as, “evidence”. It is utterly preposterous that legal patriotic and progressive organisations like the Kilusang Mayo Uno union organisation, the National Federation of Sugar Workers, Gabriela, Bayan Muna the International League of Peoples Struggles and other peoples organisations such as the National Council of Churches are labeled “terrorist” organisations.
Clearly this is a further attempt by the US-/-Duterte regime to oppress and attack critics of its policies and actions in the hope of silencing and destroying opposition to its undemocratic, inhumane and anti-people policies.
There is evidence, actual video footage, showing how the military and police authorities planted the firearms and explosives in the offices of the peoples’ organisations.

The raiding teams used defective search warrants(the search warrants used in Negros Occidental, for example, came from Quezon City) and planted evidence in the Gestapo like raids which is the oldest trick in the book by a desperate government trying to cover up its’ crimes against the Filipino People.

The ILPS calls on its members and supporters across the globe to demand the immediate release of the 62 plus rounded up democratic rights and human rights activists and the minors involved.

We call on all defenders of peoples’ rights everywhere to organise solidarity actions, emails, fax messages and social media, demanding the immediate release of the arrested activists and the minors, the dropping of the trumped-up charges and ending of the deplorable oppressive situation in the Philippines.

We also call on you to organise exposure protests at the consulates, embassies and other appropriate establishments.