Posted with permission of the author 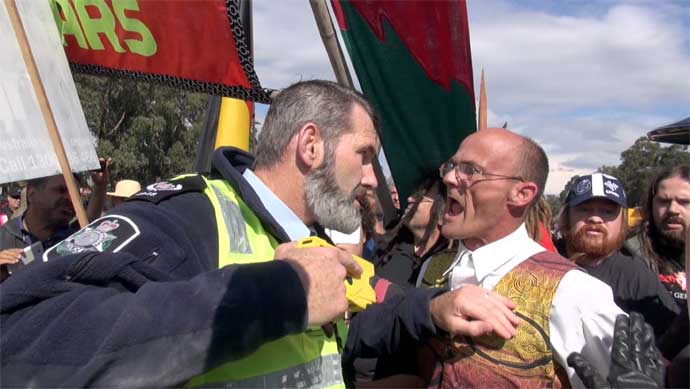 To headline Barry Morris’s comments (Arena, May 2019) on the Frontier-Wars contingent at the Canberra Anzac Day parades with the police sergeant’s ‘This is Not a Day for You’ is to silence the indigenous ex-serviceman who shot back: ‘When is our day?’

That omission is a microcosm of how becoming fixated on massacres can marginalise the ways by which first peoples continue to defend country. If the Right denies what the invaders did to them, segments of the Left do not care to hear what they did to the un-settlers. The map of massacre sites across Eastern Australia compiled by Lyndall Ryan’s group is one more weapon against depicting ‘settlement’ as sweetness and light. To present even more of the truth, the map needs to be overlain by one locating the multiplicity of actions undertaken by first peoples – from assaults on explorers to driving flocks over cliffs. James Scott reminds us why Weapons of the Weak (1987) are not necessarily weak in their impact on their oppressors.

The Frontier Wars divided the indigenous from the un-settlers. How to deal with their legacies is exposing fracture lines inside each. To explore both sides of the killing fields generates many more intersecting disputes than can be taken up here. For the moment, we can reflect on one raised in Morris’s paper: should the Frontier Wars be recognised inside the Australian War Memorial?

Let there be doubt that the invaders’ side of the frontier should be there.

To include the anti-colonising campaign in spaces which commemorate – now celebrate – colonial and imperial aggressions against first peoples across the globe is another matter.

Calls in the Uluru Statement for truth-telling will have to deal with the Native Police – which side of the frontier were they on? In which memorial, or both? Their tracking of the Kelly Gang in 1879 merits a niche in the Victorian police museum.

Who looks forward to the Black Resistance being associated with the a display honouring the forces that left Melbourne in 1861 to slaughter Maori?; or with the Boer War Memorial of Four Horsemen of the Apocalypse celebrating the British Empire’s invention of concentration camps in which 30,000 Boer women, children and the African servants died?; or to seeing their resistance digitally enhanced in a Gallery sponsored by Merchants of Death in the likes of Boeing?

For somewhat less than $500m., the fightback by the first peoples could have its own place, its separateness reinforcing that conquest and insurgency are not sides of the same coin.

The question of location has a precedent in the Memorial for the Australians who volunteered to fight with the Spanish Republic which is several kilometers from the AWM, and rightly so despite their connection with the hundreds of thousands who fought in the anti-fascist wars of the early 1940s.

In his 2019 history of the War Memorial, its Director between 1996 and 2012, the engineer Major-General Stephen Gower records that the 1996 Master Plan for the Memorial said that ‘European-Aboriginal conflict’ should be included in any new colonial gallery. In practice, Council seemed never to have signed up for that one, and few had advocated for it then or later for that matter.

In another of his four mentions of Aborigines and Torres Strait Islanders in 368 pages of text, Gower ignores the contingent beyond this put-down of our first appearance: The Frontier Wars issue resurfaced briefly in the media in 2009 on the ABC’s 7.30 Report, but failed to get any traction except from remarks by a couple of comments from academics. One, Professor Henry Reynolds, was quoted as saying that the Memorial was being racist, an easy stone to throw. The other, Professor Marilyn Lake, commented that to present Frontier War material would challenge the legitimacy of a ‘nation-building project’, which she claims the Memorial has. If there ever has been such a project it has escaped my notice and that of the staff.

What did not escape the staff’s notice was that Gower’s struggle with running writing conveys the difficulties he exhibits with running thinking, as he demonstrates when he continues: There is no public clamour for any change, and no government has shown any inclination at all to respond to any of the demands over the years. The Council also has not seen any reason to amend its earlier position after its most recent reconsideration. There the matter rests, but it undoubtedly will rise up again, for there are several protagonists who appear to derive satisfaction from the virtue-signaling associated with the issue. From time to time it will be important to restate the Memorial’s position, which is entirely defensible.

The tone of these paragraphs reveals more contempt than does their want of substance. They are reminders of the Quadrant deniers headed by Winshuttle around whose ratbaggery the current Director Brendan Nelson has to skirt.

Nelson is playing his typical double game, protecting his back against the monstrous regiment of Brigadiers (Rtd) by asserting ‘not on my watch’ while laying groundwork for a reversal by employing Wally Caruna to collect visual materials around the frontier conflicts which permits the Memorial’s exhibition of ‘For country, For Nation’ to tour regional centres until June 2021. (Should have been ‘Fighting against Empires, Fighting for Empires’.)

The approaches adopted by indigenous spokespeople will continue to  raise issues for them to work through among themselves. It is not for un-settlers to tell them what is politically correct. Since it took two sides to wage the Frontier Wars, we invaders need to debate the significances of its memorialisation among ourselves. A reluctance to pose alternatives to each other assumes that we cannot engage with each other.

One instance of how two-ways is working is that native-title claimants to Mt Kosciusko are reassessing a blanket rejection of that place-name by associating Kosciusko’s fight for Polish independence with their struggles to hold and to name their country.

After National-U republished ‘Defending Australia from the Pink Peril’, a lecture I gave to an ANU history course in 1973, a group of Maoist students expanded on its points to produce The Black Resistance (1977) with a chapter about each colony-State. Four years later, Henry Reynolds had to self-publish The Other Side of the Frontier before a full-page review in The National Times led to his thirty-year involvement with Penguin. His book caught public interest in 1982 in part because of the protests around the Brisbane Commonwealth Games just as the emergence of Black Power from campaigns against imperialist aggressions across Indo-China had excited the responses to my lecture, indeed, to its conception.

Some forty-six years on, the outcomes remain uneven, to put it politely.

Brisbane’s GPO still has no plaque to mark the execution there in January 1852 of Dundalli. However, a substantial memorial has been installed in the grounds of RMIT to Tunnerminnerwait and Mauloyheenener, executed there in 1842.

The obelisk unveiled outside Kajabbi on the 1984 centenary of ‘Battle Mountain’ explains that the Kaklatunga ‘fought one of Australia’s historic battles’ running for nine weeks and involving hundreds of warriors.

Welcome as those two sites are, the form of commemoration poses other quandaries. First, is it more productive to direct one’s energies towards erecting memorials to the Black Resistance than to pulling down or disfiguring statues of prominent un-settlers from Cook to Macquarie? Secondly, activists also have to consider the cultural appropriateness of erecting tributes to individuals or memorials to clans. Statues, like oil portraits, epitomise the individualism that contributed to the suppression of communal ways of being.

Morris mentions the belief among first peoples that, until the 1967 Referenda, they fell under the Fauna Act. Though this feeling is as understandable as it was mistaken, the assumption still finds expression along each side of the Memorial’s Pool of Remembrance where sculptured heads of kangaroos, koalas and platypi, etc end with a facing pair of a male and a female Aboriginals. How to deal with that affront suggests multiple lessons for securing the widest possible endorsement of prior occupancy and continuing stewardship.

The 1930s decision to incorporate Aboriginal heads as one more nativist motif was not a deliberate insult so much as an acknowledgment of what was then assumed to be a dying race. Had the heads been attached to any other section of the building, a sledgehammer on a moonless night might be the obvious response. – except that living Aborigines could feel that smashing the heads was like dashing the brains out of infants. Moreover, the Pool is a sacred site surrounded the names of all the fallen where un-settler and indigenous relatives and descendants come to mourn. Even taking the greatest care when excising those sculptured heads is likely to do more harm than good by fueling Andrew Bolt and his ilk. Yet, the heads must not stay as they are. One way forward is to cover them with sandstone boxes so that the affront is no longer visible while preserving the evidence of where conventional wisdom was stuck in 2019.

Ghillar Michael Anderson initiated a Frontiers detachment in 2011, with banners organised through the tireless Graeme Dunstan, and his Peace Bus. We cannot proceed without at least one indigenous person to lead. There has rarely been more than a dozen indigenes with a 100 or so supporters in contrast to the thousands on Invasion Day. The reasons are diverse. Some of those who have won recognition of indigenous service personnel worry that any mention of the Frontier Wars endangers their achievements. Lindy Nolan’s Driving Disunity the Business Council against Aboriginal Community (2017) provides a backdrop to the allegations from Marcia Langton that the Wangan and Jagalingou opponents of Adani are tools for cashed-up foreign greenies.

That bigger things are growing is evidenced by the desert pea (NOT Sturt’s) as a floral emblem for the Frontier Wars, a counterpart to the Flanders poppy. (Anyone concerned about what is ‘typically’ Australian might note that there are some twenty varieties of desert pea – including a white one, just as there is purple wattle.)

To provide wreaths for the Appin Massacre commemoration and for indigenous service people to lay at the War Memorial in Canberra the head of floral arts at the Institute of Technology, Hazel Davies, consulted to find that the desert pea is regarded as the flower of blood. This year, indigenous women invited Hazel to Cairns to take part in workshops to construct wreaths and to fashion individual flowers. They are now being made by Anglican Women’s groups, in schools and at CWA branches. A guide to making your own is on Facebook desertpeafrontierwars Wearing one throughout the year is a talking point with friends and strangers.

Apart from the police sergeant who lost it during the centenary event in 2015, the crowd is always friendly, applauding, a welcome exemplified this year by the bearded Vietnam vet in dark suit, white shirt, tie and rows of medals clapping his heart out.