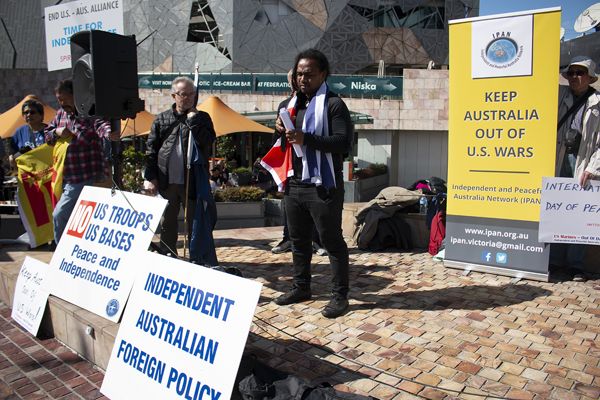 You will all have seen the media reports over the last few weeks, showing horrific human rights abuses in West Papua. Not just of people in West Papua but also of university students and other West Papuans living in Indonesia.  As a West Papuan post-graduate student here in Australia, I am asking your help on behalf of the many West Papuans who are suffering – ordinary people, shot, tortured, forced to flee from their villages simply because of wanting to achieve self-determination for their own country.

Suddenly the international community is becoming aware of what is happening. But similar things have been happening for a very long time. Independence for West Papua seemed close when the Dutch left the East Indies.  But instead, 27 years ago on this very day, today 21 September in 1962, West Papua was made a United Nations Trust Territory, where the UN assumed responsibility for the interests and welfare of the people. Independence still seemed within reach.  The UN promised an eventual free and fair act of self-determination for the West Papuans.

However the 1969 so-called ‘Act of Free Choice’ was neither fair nor free. The Indonesian military selected and isolated 1025 West Papuan men from the whole population of the country and compelled them to vote for integration with Indonesia. This result was accepted by the United Nations, with the encouragement of Australia and the United States, which then, as now, were keen to support Indonesia.

Recently violence against Papuans at home and elsewhere in Indonesia has escalated very substantially.  I won’t go into details as you will have seen some of it on your screens. But plenty is also happening that is not reported.  The most vulnerable suffer.  A day ago a baby was shot to death in its mother’s arms, and her 10 year old son shot dead beside her.

Abuse is not just physical – West Papuans are subjected to the most hurtful and personal verbal abuse, comparing them to animals, ridiculing their dark skin and frizzy hair. West Papuans are Melanesians, very different culturally and physically from Indonesian people.  The country is one half of a huge Melanesian island – the other half is the independent state of Papua New Guinea. It is independent like almost every other Pacific Island state where the colonial masters have long withdrawn. Our Pacific brothers and sisters have their independence– they are supporting us in our struggle.  Tonight at the Brunswick Town Hall there is a Pacific Islands concert for West Papua.

We want an end to the shooting, the torture, the personal humiliation. We want a genuine chance to choose our future.  We want to be custodians of our own lands and ourselves benefit directly from its resources which are very considerable. The Freeport mine is said to be the most productive gold mine in the world.  There is also oil and massive deposits of copper. As well, large scale economic development is taking place across West Papua in the form of logging, agricultural plantations, and gas extraction. Vast areas of  land are being taken with little or no compensation.

West Papuans are fast becoming a minority in their own country. People from Java are being relocated to West Papua and given land to settle on.  Our culture welcomes strangers as guests  – but on this scale this transmigration is a deliberate move to overwhelm us. Senior positions are mostly held by migrants. Business and economic activities are dominated by non-Papuan migrants.

Education and health services are very poor in most regions with very few doctors, medical staff or teachers. The West Papuans are the poorest, least educated and most unhealthy population group in Indonesia, even though their region is the richest in the country in natural resources. What is happening in West Papua has been referred to as “a slow genocide”

Help us please! There are a number of ways the Australian government and people can help West Papua. Some of us as individuals have already received your help and for this we are grateful – some of us have had the benefit of undertaking educational courses in Australia. Some who arrived as refugees have been accepted as Australian residents and are now productive members of the Australian community.

There are many ways Australians can help West Papua. A very effective way is through your politicians – write to or visit your local members requesting that they raise the urgent concerns of West Papua below with the Australian Department of Foreign Affairs and Trade and the Attorney General’s Office – ask the Australian Government to urge Indonesia to put a stop to human rights abuses and allow a referendum to take place. In January, Indonesia agreed in principle to allow a visit by the UN Human Rights Commissioner but this has not yet been allowed to take place, despite international backing. The Australian Government should be pushing for this. Supporting moves to put West Papua on the UN Decolonisation List is another way in which the Australian Government could help. Petitions are circulating on these issues – please sign them. Australian politicians should be encouraged to join the International Parliamentarians for West Papua organisation – a few are already members.

Very importantly we are calling on the Australian Minister of Defence to bring about an immediate end to the training of Indonesian soldiers in Australia – it is these people who comprise the militia which patrol West Papua and intimidate and injure its people.

As individuals, Australians can keep themselves well-informed on West Papua. Read, watch, listen  – go to the frequent talks and seminars being held at present. Become familiar with West Papua’s recent history – the facts speak for themselves. The Act of Free Choice was in fact an Act of no Choice. Since then the gross injustices against the West Papuan people, physical and economic are well-documented.

You can help raise the awareness of others as to the West Papua situation – maybe your social, community or church group could hold a film or discussion night – local West Papuans would be pleased to help. Help fundraise – there are a number of well-organised groups in Australia who are working for self-determination of West Papua – you can easily find them on social media and attend their fundraising events or make a donation.

Increasingly more countries are coming to realize the plight of the West Papuans and supporting its cause.  West Papua is Australia’s nearest neighbour.  Its people are suffering in terrible ways. They have never been allowed a voice in their own future.

We ask the people of Australia to do all that is possible to help West Papuans achieve the self-determination that was once promised to them, but has long been denied.

Check the links below, get involved and support West Papua struggle. West Papua in need of your help more than ever before.