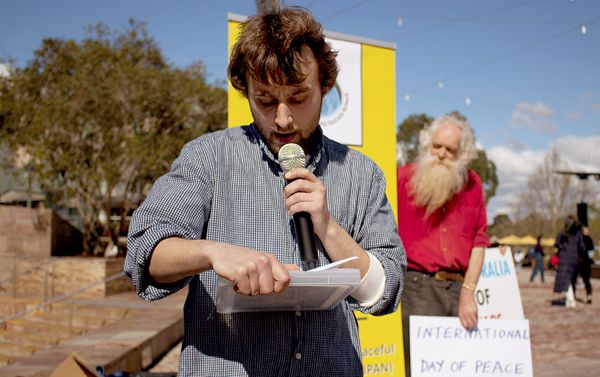 We meet on the stolen lands of the Wurundjeri people. Let us acknowledge that sovereignty of their country was never ceded and pay respects to their elders past, present and emerging.

Recent provocations against Iran are the latest in a series of efforts by the United States to establish a pretext for further military intervention in the Middle East. Despite a history of disastrous campaigns in the region, such as in Iraq and Libya, which saw massive civilian casualties, the decimation of vital infrastructure, a deepening of major sectarian conflicts and a catastrophic breakdown in social and political stability, the United States remains unrelenting in its pursuit of further conflict.

The drive for conflict with Iran follows an ongoing deterioration of diplomatic ties and the reinstatement of harsh sanctions by the US in an attempt to cut off supplies of Iranian crude oil to an already oversupplied world market. The economic factors behind this unfolding conflict have not been left out of mainstream coverage of the events; however they have typically been woven into the narrative in such a way as to imply that the United States is averse to the notion of war with Iran, that it ‘fears’ the possibility of a rise in oil prices.

The Strait of Hormuz, which has formed the backdrop for many of these recent escalations, is a critical strategic location in the world energy market. Almost a third of the world’s liquefied natural gas passes through this narrow strip of ocean, along with a quarter of the world’s oil.

The United States has sought to justify its intervention in the region on the grounds that it is seeking to ‘secure’ the waterway in order to ensure ‘navigational freedom’ and to prevent a crisis that would potentially see oil prices skyrocket. This follows a series of recent attacks on oil-tankers in the region, for which key members of the Trump administration have launched a string of unsubstantiated allegations toward Iran in a brazenly undiplomatic and escalatory move.

If we are expected to believe that the United States is prepared to ignite yet another significant conflict in the Middle East for the purpose of keeping oil prices low, then we should ask ourselves why Iranian and Venezuelan oil remains tightly under US sanctions, restricting supply and raising prices. Surely if the United States government was acting in the pursuit of lower oil prices, then they would lift these sanctions, releasing this oil onto the market and bringing prices down.

If this pretext was legitimate, why would the US be seeking to further inflame the crisis by deploying troops and warships to the region, increasing the chances of a major conflict and thus raising oil prices?

Of course the reason is that the multi-billion dollar oil cartels which set the foreign policy agenda for the United States have absolutely no interest in lower oil prices. Rather it is their pursuit of higher oil prices and greater market control that is behind the tough sanctions against Iran and Venezuela and the relentless drive to exacerbate the prospects for war in a region so critical to the world’s energy market.

The recent crisis in the Strait of Hormuz follows reports by the International Energy Agency that booming oil-production has culminated in an oversupply of the world’s energy market, leading prices to fall over the past year in a trend which is expected to continue, hurting corporate profits, and the value of their stock and shares.

If the situation in the Strait of Hormuz continues to escalate toward a full-scale conflict, it would prove extremely disruptive to the production and transport of oil in the region, which under the conditions of an oversupplied market would serve to reduce supply, raise prices and boost profits. It would also enable the United States to pursue its long-held desire to facilitate regime-change in Iran, with the ultimate goal of bringing the nation’s now state-owned oil and gas companies, as well as other key state-owned infrastructure, under the control of private US-based multinationals.

The working people of the world have absolutely no interest in supporting these recent acts of aggression and provocation towards Iran by the United States. These desperate contrivances to goad Iran into a major conflict represent nothing more than a frantic attempt by a contingent of wealthy industrialists and financiers to stave off a crisis of overproduction in the world energy market.

We must not be content to turn a blind eye to their crimes. We must condemn the Australian Government’s complicity in US provocations toward Iran and renew our calls for an independent foreign policy, one that is not beholden to any big power but which can legitimately be said to serve the interests of the masses of people of this country and the world. We must adopt an independent working-class agenda in the struggle against imperialist domination domestically and abroad and to build hope for a better, brighter, and more peaceful future for this world.