From left: MillieTelford, Stuart Nugget,Tyrone Foster and Nicole Hutton at the SydneyTown Hall on September 5 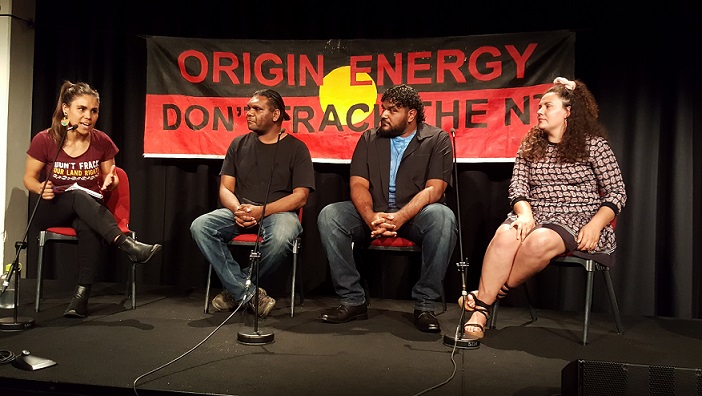 When plans to frack the Northern Territory were announced, communities didn’t even know what fracking was.

Communities were told the mountains of salt, billabongs of bleach and other toxic chemicals ready overflow in the first wet season were just like products you’d find in your cupboard at home.

Nicole Hutton, a Garrwa woman now living in Brisbane, says there was no consultation.

Seed has worked against fracking in the Northern Territory for over five years.

Members began communicating within and between Territory communities, formalising their organisation in 2014.

By the 2015 NT election, the ALP won a landslide, promising a fracking moratorium.

Nicole Hutton said this temporary reprieve was “a powerful time” when communities were educated. But last year the ALP Gunner Government announced fracking would go ahead. This followed federal government threats to remove GST revenue if state and territory governments didn’t allow fracking.

Then Bill Shorten promised $1.5 billion to build the Beetaloo gas pipeline to Darwin to export. Immediately after the Federal election, fracking maps covering more than 50 per cent of the Territory were released.

Despite this, a strong alliance led by Seed is building action against plans to industrialise the Territory.

They are targeting Origin Energy.

In the lead up to the Origin AGM in October, the Power of Country Tour kicked off in Sydney Town Hall on September 5. This followed smaller events in Redfern and ongoing Frack-off-Fridays outside Origin’s HQ in upmarket Barangaroo on Sydney Harbour.

Seed, alongside the Australian Youth Climate Coalition, Lock the Gate and GetUp and with growing union support in the NT, are telling over two million Origin customers on the east coast, “Your voice is incredibly powerful in this campaign.”

At the Sydney meeting hundreds of people were enlisted in the fight.

Garrwa and Yanyuwa man Gadrian Hoosan is from Borroloola where the community voted 95 per cent to be frack free.

He says, “Our story’s in the land. If you rip a page of a book you can replace the book, but you can’t replace the STORIES IN OUR LAND.”

He’s made the trip from the Gulf to Sydney many times, and his community is the focus of the brilliant doco, Water is Life.

Gadrian has plenty of experience with multinational resource corporations. For years Glencore paid no tax while lead poisoned the McArthur River and his drinking water. This time Gadrian left it to others.

“Our story’s in the land. If you rip a page of a book you can replace the book, but you can’t replace the STORIES IN OUR LAND.”

Stuart Nugget, a Jingili man from Elliott said the mining companies are not being truthful, “I’m here to speak up for my people…I didn’t know what was happening in my country.

“I started understanding what these mining companies are doing. It would destroy our way of life.

“Our Country is our mother. We have to preserve, protect and look after her.

“We are getting all the families together to say no.”

“It’s time to take this fight around the country!”

Arrernte-Jingili man Tyrone Foster asks, “Origin, what happen if I walk into your home, taking all your precious things?”

Last year man Stuart Nugget told Origin’s board, “You didn’t get permission off me. I didn’t allow you to come to my home to destroy my home.”

“They try to divide us to conquer … As long as we all stay together, we can beat them … One person at a time.”

Nicole Hutton says they’ve been going from community to community to talk to Aunties and Uncles. There’ve been thousands of conversations

So far Borroloola, Minyerri and, in late August, Katherine have been declared frack free.

“We all get our electricity, our gas from somewhere. We are all customers of someone.

“It’s time to take this fight around the country!” she said.

Seed is targeting Origin Energy because of its clean green advertising, its offices in four capital cities, its contracts with local councils, its gas bottles supplying country towns and more, make it vulnerable way beyond the NT.

Compere Millie Telford is a Bundjalung woman from the Minjungbal clan of northeast NSW. She says, “When you stop the first company it sends a message.”

Origin has already reacted to the pressure.

Raymond Dixon, a Mudburra Traditional Custodian was not at the meeting, but his words are powerful, “We wanted to present a letter on behalf of over 200 Native Title holders from Origin’s exploration areas who say they don’t support fracking. Origin called the police on Elders and children and forced us out of the meeting.”

Millie Telford says, “They don’t like what we’re doing. They say they are ‘energy leaders in climate justice’…They want to open up one of the largest fossil fuel basins in the world, equal to 50 new coal fired power stations.

“They care about money,” Millie says. “We need to have conversations with their customers.”

They are also speaking to their employees and shareholders. 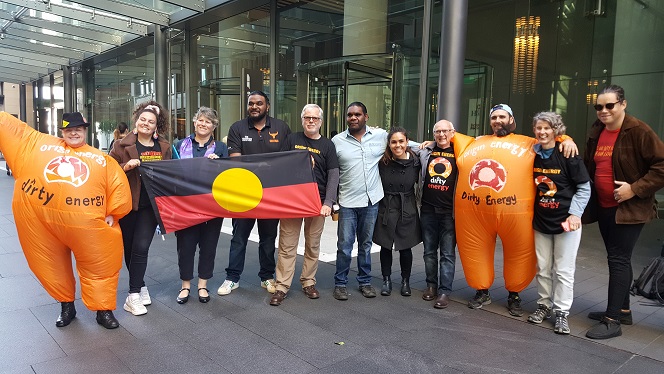 Seed and Lock the Gate activists outside Origin’s HQ on Frack-off-Friday, 6 September

ACTIONS – One conversation at a time

Let your friends, family, workmates know what’s happening and invite them to join events, sign the petition, talk to others or all three!