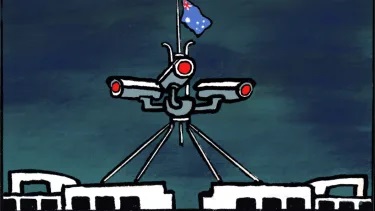 Australian society relishes secrecy and surveillance. Forget the laid-back, relaxed demeanour that remains the great fiction of a confected identity; like all such creations, the trace should not be mistaken as the tendency. The political culture of Australia remains shaped by penal paranoia and an indifference to transparency. The citizen is not to be trusted; rather, the subject is to be policed and regulated into apathetic submission.

The statute books of the federal parliament are larded with provisions of secrecy that make doing credible journalism in the country nigh impossible. Journalists are left to their own devices, inventive as these might be, assisted by the odd prized leak.

The Australian Federal Police raids executed last month on the home of a News Corp journalist and the Sydney headquarters of the ABC had, for the clandestine community operating in the capitals of Australia, a surprise. A usually divided fraternity came together in one voice, attempting to challenge the warrants and seek reform on matters related to press freedoms.

Media organisations would like to see parliament perform its functions, namely in the field of passing legislation that would enhance Freedom of Information provisions, arm press outlets with the means to contest warrants aimed at journalists, furnish whistleblowers with credible protections, and tilt the balance away from the national security grand inquisitor that seems to prevail in Canberra.

Understanding Canberra and the public service, however, is to understand a form of studied stasis, an effort to stymy change. Ideas tend to go there to find cold storage if not expire altogether. The way to keep them in cold storage and throw away the key is to set up an inquiry, with all the baubles and tinsels of cheap accountability.

This is the preferred approach of the Morrison government, knowing that such an inquiry will be guaranteed to kill off any reform drive. (Four months should do it: the inquiry is due to report on October 17.) In his letter to the opposition leader Anthony Albanese, Prime Minister Scott Morrison informed his counterpart that,

“The Government is committed to ensuring our democracy strikes the right balance between a free press and keeping Australians safe – two fundamental tenets of our democracy.”

Knowing the hostility this government, and its predecessors, have had to the only press freedom that matters – exposing abuses of state and corporate power – the limitations have already been inked.

One way of ensuring a smidgen of reform, if at all, is to use the Parliamentary Joint Committee on Intelligence and Security (PJCIS), a body of approved politicians who can be trusted to do the right thing by secrecy and security. Independents are excluded; contrarians are barred. Morrison claims the PJCIS is “well placed to conduct this inquiry given its responsibility for, and experience in, handling issues concerning national security information and legislation”. Whatever qualifications the sitting members will have, their most valued pre-requisite is the capacity for premature adjudication of the problem, adjusted to satisfy the security apologists.

Andrew Wilkie, the independent MP more qualified than most to sit on the committee, makes the point starkly.

“The Labor and Liberal-dominated PJCIS is part of the problem because it’s signed off on every unnecessary security reform in recent history.”

To permit the committee the means and latitude to decide that balance on press freedom and security would be the equivalent of granting full powers of determination to a taxidermist over your favourite pet. Denis Muller sees this as foxes guarding henhouses or poachers overseeing game-keeping.

The PJCIS has been one of the most important entities behind approving the shabby Australian national security state, a clumsy creation that does nothing to improve security let alone preserve freedoms. Its members are terrified by technology and the Internet, and see any effort to restrain their reach as necessary to protect Australians.

Wilkie reminds us of the dubious resume of the PJCIS.

“Who could forget the controversial data retention bill of 2015 and just last year the encryption bill?  In both cases the PJCIS recommended some tweaks around the edges, but… recommended the bills be passed, despite the serious concerns about both.”

While the European Union makes strides against such inefficient and dangerous policies as data retention, Australian governments embrace them with a relish for anachronism.

The inquiry hopes to assess, in part,

“Whether and in what circumstances there could be contested hearings in relation to warrants authorising investigative action in relation to journalists and media organisations; (and) the appropriateness of thresholds of law enforcement for law enforcement and intelligence agencies to access electronic data on devices used by … media organisations.”

A full agenda for reform is guaranteed to be avoided. 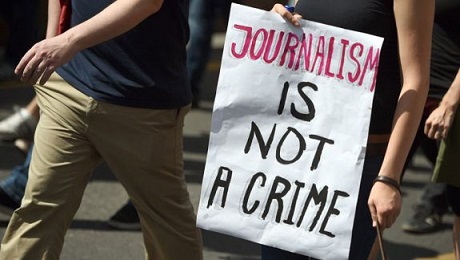 Labor, in turn, is trying to shore up its poor parliamentary performance of late in attempting to set up a second, separate inquiry free of the clutches of the PJCIS. That inquiry makes explicit reference to the “public’s right to know and press freedom”. Senator Kristina Keneally, shadow minister for home affairs, notes a prevailing “culture of secrecy and perverting the public’s right to know that has been making its way through this government for too long.” In unwittingly casting such stones in the glass house, she ignores the record of previous Labor governments with similar leanings towards the national security state.

The parliamentary committee has its defenders in the Canberra set, relieved that the matter will be contained. Jacinta Carroll, as director of national security policy at the National Security College at ANU, can be relied upon to sing the appropriate, pro-secrecy tune.

“The PJCIS is the appropriate body to undertake this review, as it’s made up of elected representatives of the people in Australia, and it’s also an established and expert body in the matter at hand.”

Any praise for such committees should be met with scepticism, and her willingness to accept the supposedly useful function it performs suggests capitulation rather than engagement.

Carroll’s they-know-best tone is schoolmarmish and characterises the befuddlement of the security hacks.  She accepts, in tokenistic fashion, that, “A functioning and vibrant democracy is characterised by engaged civil society and informed debate.”  As Australian democracy is not vibrant, and lacks oxygen for a civil society struggling to fend off the regulators and spooks, her observation has little bearing on reality.

Given all that, she still insists, as the inquiry takes place, that all “maintain the focus on being informed about the complexities, nuances and competing interests at play, and not be lured into an oversimplified debate.”  Read: let bought parliamentarians seduced by national security briefs and their promoters dictate the balance.  The parents know best.

The original source of this article is Asia-Pacific Research