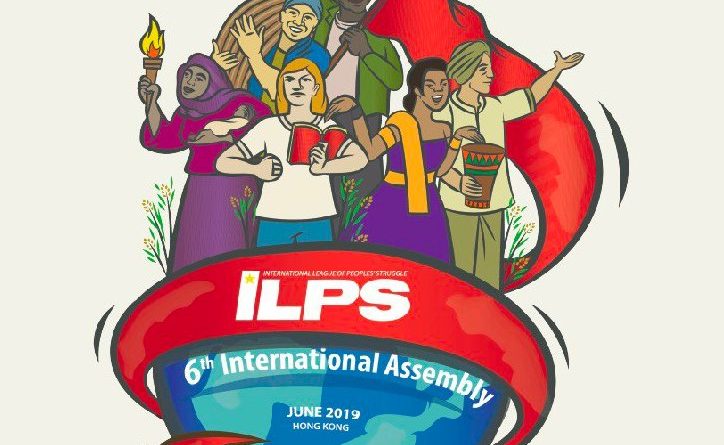 The International League of Peoples’ Struggle (ILPS) successfully held its 6th International Assembly (6th IA) on June 23-26, 2019 in Hong Kong with the theme, “Win a bright socialist future for humanity! Unite the people to fight against imperialist plunder, war, racism and fascism!”

The number of participants and countries covered surpassed that of all previous assemblies. It confirms the League’s status as the largest and most consolidated global formation of militant, anti-imperialist and democratic organizations in the world today.

Len Cooper, outgoing Vice Chairperson of the ILPS, opened the 6th International Assembly by welcoming the delegates, observers and guests from the different countries covering all continents.

The first keynote speaker was Nilufer Koc, Co-Chairperson of the Kurdistan National Congress. She opened her speech by asking the assembly to honor all revolutionary martyrs in all countries who have made the supreme sacrifice for the people’s cause. She then explained and stressed that the Kurdish liberation movement is fighting the US-designed Greater Middle-East Project which seeks to partition countries so that they are easy prey to imperialist plunder and bullying. In her inspiring speech, she highlighted the outstanding role of women in the Kurdish liberation movement.

The second keynote speaker was Pedro Rosas, from the Movimiento Gayones in Venezuela. He expressed his gratitude to the solidarity given to the people of Venezuela by progressive and anti-imperialist forces around the world against the blockade and threats being carried out by US imperialism and its stooges outside and inside the country. He declared that the Venezuelan people were prepared to wage armed resistance in case imperialism carries out armed aggression.

After the first two keynote speeches, the Assembly approved the Agenda of the Assembly and the Rules of Participation including the Rules for Nominations and Elections to guide the conduct of the whole proceedings.

Outgoing ILPS Chairperson Jose Ma. Sison gave his report on the work of the ILPS through a recorded video as he is prevented from travelling outside the Netherlands because of his stature as a revolutionary and staunch anti-imperialist.

He said that since its founding the ILPS has grown in “strength and proven itself as a reliable force of the people of the world in their struggle for greater freedom, democracy, social justice, all-round development and International solidarity against imperialism and all reaction.”

“We have stood firmly, spoken clearly and acted militantly in defense of the political, civil, economic, social and cultural rights of the people against the depredations of monopoly capitalism, the unbridled greed unleashed by neoliberalism, the ceaseless wars of aggression, and the plunder and environmental ruination by US imperialism and its allies and puppets.”

He discussed the major aspects in the current global crisis of the capitalist system, the intensifying exploitation and oppression of the people by imperialism and reaction, and the growing resistance of the people.

He then expressed his intention not to run for reelection in the ICC after having served as Chairperson for 15 years but said that he would continue to help the ILPS in whatever capacity the new leadership would ask him to do.

A resolution was then put forward and overwhelmingly approved by the Assembly designating Prof. Sison as Chairperson Emeritus. The resolution states that, “As such, he may be consulted and requested to give advice to the ILPS Chairperson or any ILPS leading organ. He may also take initiative to give advice to the aforementioned. Whenever appropriate, he may be invited to address or grace important events of ILPS.”

Malcolm Guy, outgoing General Secretary of the ILPS, gave the report of the work of the general secretariat such as maintaining the communication system between the ILPS leadership and the other organs of ILPS, and maintaining the website and Facebook account of ILPS. He also reported on the representation work that he did in accordance with instructions from the ILPS Chairperson.

The outgoing Vice-Chairperson for Internal Affairs, Antonio Tujan, made his report. He cited the big gains in the expansion of ILPS particularly in Africa and Asia. He focused on the need to further consolidate the League in the area of organization in terms of forming country and global region chapters and making the commissions on the different concerns to function more effectively between international assemblies.

He mentioned that ILPS was also instrumental in the creation of a broad anti-imperialist global network against monopoly capital called People Over Profit as well as the Resist US War campaign movement. ILPS also commemorated the centenary of the great October Revolution and the Second Centenary of the life and contributions of Karl Marx to humanity.

Outgoing ILPS Treasurer, Veerle Verschueren, gave her financial report. She said that the ILPS finances were relatively viable and enabled the ILPS to carry out its operations effectively. The main source of income of the central fund remains the membership dues. But there were still problems in the payment and collection of dues. There is also a need to think of more creative ways to raise funds.

Some amendments to the charter were proposed and approved. An amendment was introduced into the By-Laws with the provision for ILPS to form alliances with other progressive and anti-imperialist forces to create a broader front against imperialism. It was followed by a resolution to support an ongoing process in the building of an international anti-imperialist and antifascist united front in cooperation with other anti-imperialist formations and alliances.

Workshops organized by the commissions in charge of the different concerns of the League were held. The workshops analyzed the problems created by imperialism and reaction related to the specific concerns and participants shared experiences on the struggles and campaigns waged in different countries to address these problems. The workshops then formulated resolutions on the work ahead and the struggles to address the issues of importance. A number of Global Actions on various issues were proposed. These resolutions were later presented to and approved by the assembly in plenary session.

Special events were also held that were well attended, such as the solidarity events on the Philippines, Indonesia, HK, West Asia/Africa, Latin America. There were forums on Socialism, US war and militarism, Belt and Road Initiative, struggles of the Kurdish and people of West Papua. There was also a book launch of the latest book series of Jose Maria Sison.

In the forum on socialism, Prof. Sison gave an excellent exposition on socialism spanning the period from the birth of the first socialist state, the initial but earthshaking achievements under socialism, to the collapse of the former Soviet Union and Eastern bloc countries and the restoration of capitalism in China due to modern revisionism and his bold assertion of the future resurgence of the struggle for socialism provided the proletariat and the people fulfilled certain requisites. Irina Malenko gave an inspiring presentation comparing her life in the former Soviet Union and her life in capitalist Netherlands and Ireland that clearly showed the superiority of socialism over capitalism. The presentations of the two speakers proved that socialism is realizable and not an idle dream.

Helda Khasmy spoke about the historic revolutionary struggle of the Indonesian people against Western colonialism, and current struggles against neocolonialism, domestic feudalism, and bureaucrat capitalism.

Palestinian refugee Khaled Barakat of Samidoun was prevented from participating in the assembly to speak on Palestine and West Asia and North Africa due to ongoing and intensifying persecution and repression from the German government who recently refused to renew his residency status in Berlin. Instead his colleague Charlotte Kates delivered greetings on his behalf and explained developments in Barakat’s case.

The 5th and last keynote speaker, Raphael Katolo Chiposwa of the Socialist Party of Zambia, spoke of the struggle of the Zambian people for national and social liberation, as well as liberation struggles of other African nations for liberation from neocolonialism, plunder, and expanding foreign militarism as a result inter-imperialist competition in the continent for vast natural resources and markets.

One plenary session was allotted to discuss plans and resolutions to strengthen the operations and organization of the commissions, country committees and global region committees.

The Assembly discussed and approved the General Declaration of the 6th IA by acclamation. It encapsulates the League’s analysis of the major contradictions in the world capitalist system today, the intensification of inter-imperialist rivalry for the redivision of the world, the increasing attacks on the people by the imperialists led by the US, and the rising tide of people’s resistance around the world. The declaration also contains the resolutions put forward by the different workshops on the various concerns that had been previously approved by the assembly.

It was resolved that the general declaration and all the commission resolutions, including the schedule of the internationally coordinated days of action, would be published online and in print for wide dissemination.

The delegates then elected the members of the incoming International Coordinating Committee (ICC) that would steer the ILPS in the next three to four years according to the course set by the General Declaration.

The 6th International Assembly concluded on a bright note with all the participants in high spirits as they joined in a Solidarity Night of rousing speeches and moving cultural numbers. Through dance, songs, poetry and drama, the assembly participants depicted the sufferings inflicted on the people by imperialism and reaction and the struggles of the people to win liberation. A highlight of the Solidarity Night was a tribute to the outgoing Chairperson Jose Maria Sison for his invaluable contributions to the ILPS since its founding and his outstanding contributions to the over-all anti-imperialist movement.

The Solidarity Night was also an occasion to celebrate the success of the 6th International Assembly in uniting the entire ILPS on the work and struggles ahead and inspiring them to carry on the work of advancing the anti-imperialist and democratic struggles of the people.