Vlaudin Vega is a survivor of the Chilean coup of September 11, 1973. He has lived in Australia since then, but has sometimes travelled back to his South American homeland. This is his eye witness account of the failed coup against Hugo Chavez’ Government in 2002. 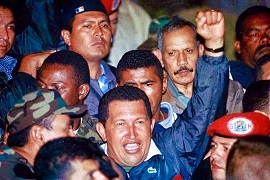 It is quite obvious that these words about Venezuela and the events of 11th of April 2002 are subjective and a personal interpretation of my experience around Miraflores (district of the historic presidential palace) on this important day.

After expending a few months with comrades from another South American country, Mr. Fox[i], a puppet of the United States and breaking with the Mexican tradition of being pretty much neutral or supporting progressive movements not only from Latina America but from the world, told our comrades that they had to leave. I and other comrades had no option but to depart from the Mexican city. Comrades were directed to go to different countries and I was asked to go to Venezuela.

To my fortune, I arrived in Caracas on the 10th of April. Sometimes the gods look upon us with favouritism, so therefore I consider myself very lucky to arrive in that city at that time.

One of the first impressions that Caracas gave me, even before arriving at the airport, was the beauty of the sea and how green it looked. The airport gave little indication of the commotion that was going to take place in the immediate future and of the great revolution that was taking place in the land of the liberator.

Out of the airport, I asked a taxi driver to take me to a central place and to a very cheap hotel; sometimes we don’t have the luxury of occupying five stars hotels. From the airport to Caracas what caught my eyes were the shantytowns, the people living in the hills, people that were going to play an important role in bringing Hugo Chavez back to power.

The hotel was in the old part of Caracas. The old part of Caracas reminded me of many of our old cities. Cities that have direct links with our past. Cities with a lot of history. Cities that have forged the lives of many of our revolutionaries; people and comrades determined to see a united Latin America. Our struggle for independence, socialism and the unity of Latina America is all one package and many of our best have given their lives for it.

After unpacking my stuff in the hotel, I switched on the television and to my amazement, I had a sense of déjà vu. It took me a while to realise that I was in Caracas, Venezuela in 2002 and not in Chile the days previous to that 11th of September.

The message was the same. The methods were the same. The mechanisms were the same. A constant tirade of abuse against the elected, legitimate president Hugo Chavez and his government made me think that the Yankees[ii] had not changed the plot one iota. By about 8 o’clock at night you could hear the banging of the pots and pans[iii] that again reminded me of Chile.

One aspect of me, made me feel happy because they were using the same blue print in Chile ‘73 and Caracas ’02. Again, this is an indication that we are a Nation, that we are one people and that we ought to be one country. Hopefully, this will be something that I will see in my lifetime.

This was my first time in Caracas, so I had little information about the city and where things were located. I was not aware that Miraflores was only three blocks away from my hotel.

The following morning, so as not to get lost I decided to walk the main Avenue, Avenue Baralt. I got tired of walking and returned to my hotel, hoping to catch the news regarding this opposition march that was going from point ‘A’ to point ‘B’. Later on, we found out that the leaders of this march, which included right wing union leader Carlos Ortega Carvajal, had decided to march to point ‘C’ – Miraflores.

On my way back to the hotel, I began to see people with red berets, flags and placards marching; they were heading towards Miraflores to support the government of Hugo Chavez. To my amazement I saw a large crowd gathered outside the Presidential Palace in front of a modestly built stage where Bolivarianos and Bolivarianas were sending messages of support to Hugo Chavez. Being in the middle of such crowd made me feel at ease, made me feel part of the group, made me feel among comrades.

After hearing lots of messages praising Chavez and his government and a bit of that warm music typical of the Caribbean, we heard that the opposition rally was coming towards Miraflores. A large crowd and myself began to run towards the place where the opposition was arriving. As soon as we reached the bridge, we saw the large crowd coming towards us, and we could hear the abuse and we could see rocks being thrown at each other. Also, we could see the National Guard begin to approach. And they were able to contain the opposition on one side of the bridge. Later on, much later on, I found out that the leaders of the opposition had taken the marchers knowing very well that there was a large number of Chavistas in front of the Palace.

After a period inhaling that unpleasant yet familiar smell of tear gas, I decided to return to the Palace. When I got back, I sensed a type of confusion among the people; we were seeing people with bullet wounds in the head. Anybody who knows about firearms would understand that such a precise shot could only be carried out by snipers or sharpshooters. Such a precise shot can only be accomplished by a powerful firearm.

Then I began to worry. Throughout our daily lives we roughly plan our day ahead so at least we have an immediate future. We basically know what we are doing the next day but then it was not the case; due to the confusion, due to the panic, due to the uncertainty there was no future, and that is a very unpleasant state of mind.

At that point in time, I must admit I began to have real concern for my safety. I sensed things were not under control. Once again, I began to see the face of the oppressor. I felt the anger that the ruling class has towards the common people. At that point in time I was wearing my hair a bit longer and my beard was very wild, an image that perhaps was not going to be look good among the military, so I decided to get back to my hotel; that was when I witnessed those images of people firing from Llaguno Bridge. And at the same time, I was ducking for cover because we were being shot upon from the roof tops of surrounding buildings. My intentions of getting back to my hotel were prevented by a large force of the Caracas police shooting towards the defenders of Hugo Chavez.

Much later on, I was able to reach my hotel by side streets. The hotel was a haven, a place where I found a bit of safety. Back in my room, I began to dispose of certain material i.e. papers that perhaps were a bit delicate. Again, the burning of papers and documents was something that I have lived in the past.

That night I slept very little. I was constantly watching and listening to the news regarding the whereabouts of Hugo Chavez. Once again, I felt the same anger towards the traitors that were trying to turn back the clocks of history. Once again, I could see the dirty hand of the empire trying to stop our path to true independence.

By the middle of that afternoon, the masses had taken over the streets. Crowds gathered outside Tiuna Fort and outside the Government Palace. They were determined to get back their revolution. And a few hours later, thanks to the people and the truly democratic armed forces, Hugo Chavez returned to the Palace. For me, those days were a tornado of emotions. I don’t think I have experienced so many emotions with that intensity ever.

The events of that day have sent ripples throughout the world and in particular to our America heralding that a new world is possible. We are convinced that a new period in our history has begun. The empire and the fundamentalist right wingers are on the back foot and they are desperate to implement their Armageddon that will take them to heaven. But the heavens must be created on earth for the benefit of all, not just for the chosen ones.

We are convinced that we are witnessing the creation of a new power that will show the world that it is the economy that must adjust to the human being and not the other way around. We can promise you that when this power is in full swing we will not force anybody to eat arepas, pastel de choclo or empanadas!!!!

[iii]The coup masters pursue strategies of divide and conquer and deceit. They encourage the upper middle classes and the rich to present themselves as the poor and hungry, with their empty pots.