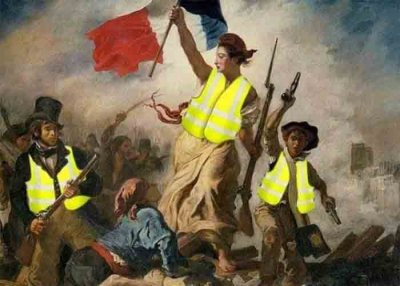 Once again, France provides salient lessons in radical social change. In May 1968 there was a student and union alliance that almost brought down De Gaulle and the 5th Republic. We now have the ‘Gilets Jaunes’ (Yellow Vests) movement. It has been called a ‘citizens’ revolution’ and their vests a ‘symbol of resistance worn with pride by the downtrodden’. They have been likened to Trump’s deplorables and the UK’s brexiteers. They have been copied in Canada, Germany, Portugal, Italy. They have been claimed by the left and the right. The ambiguous and polymorphous nature of the movement makes it impossible to assess clearly either its nature or direction, but for leftists there are lessons to be drawn from it even as it is still taking place in the streets of France. I have proposed ten, in no particular order.

The famous French Revolution painting by Delacroix, “Liberty leading the

Lesson 1: The end of history – not

If proof were needed, this is it: the Fukuyama thesis of 1992 – that the triumph of a liberal parliamentary democracy is the final word in political organisation – was a conservative illusion. The fall of the Berlin Wall was not the end of history and the apparent granite of its capitalist base is being questioned by a broad popular movement born of profound dissatisfaction with the dismantling of the welfare state. The Yellow Vests show that popular social rebellion can still occur in a democratic, advanced, neo-liberal democracy independently of complacent left parties. France taught us this in 1968; it has repeated the lesson in 2018.

Popular rebellion doesn’t require prior organisation, nor leaders. It can occur spontaneously in response to social problems and can be an effective challenge to the status quo. However, a question hangs over such movements: can they be sustained without an organising body to sharpen their focus and harness their energies towards a common and unifying political purpose? The Paris Commune of 1871 and the student rebellions of 1968 made use of existing institutions – the Paris municipal council, student and workers’ unions – as a means to maintain resolve and as instruments to effect change. In 1917, the demonstrators in the streets of Petrograd were often far ahead of the political parties in tenacity and intent; but it was the party that effected enduring transformations.

Popular rebellions will eschew political parties that want to assimilate them or ride on their coat-tails. Accordingly, the Yellow Vests has avoided the labels of ‘right’ and ‘left’, while being claimed by both Jean-Luc Mélenchon’s neo-communism and Marine Le Pen’s neo-nationalism. For all the shyness about political labels, the Yellow Vests are unequivocally hostile to the right and their basic claims are clearly left-progressive: a fight against the growing inequalities in wealth and power, demands for a 40% increase in the basic pension and social welfare payments, the re-establishment of public services, the hiring of more civil servants, an end to the privatization of public services and state property. They demand massive construction projects to house the homeless, a ban on genetically-modified crops as well as plastic bottles. They want France to end its participation in useless and expensive foreign wars for the benefit of the USA. They are resentful of big companies and of the rich who pay little tax while profits increase, even while austerity measures are put in place against the middle and working classes.

Ultra-right elements will infiltrate popular and amorphous movements. If unchecked they inflect the movements towards a xenophobic, anti-immigration agenda where native (i.e. white, Caucasian) citizens are constructed as a threatened species. So far, some ultra-right groups wearing yellow vests have attacked immigrants in Calais, indulged in racist sloganeering, and threatened gays. The Yellow Vests in their vast majority have so far rejected the ultra-right’s overtures.

The temptation of ultra-right is that it provides the mirage of radical politics. But instead of addressing the growing inequalities in wealth and power, its adherents get inflected towards the impasse of jingoism and race relations. The rich sleep well while the battlers fight amongst themselves and the majority leftist parties play the fiddle. An old and tragic story.

Even so, there is an important lesson for mainstream leftist parties: if you ignore the bread-and-butter social issues of the proletariat and the petit-bourgeoisie then you risk them being absorbed by the ultra-right. The point has been made many times in the past (see my article ‘The Great Betrayal’, in Spirit of Eureka, 13 January 2016). Leftists and progressive groups need to hold majority leftist parties to account and call out their betrayals in the interest of cynical realpolitik and parliamentary calculation. They must think and act with the left, against the left.

A price had to be paid for western societies adapting to a new globalist economic model since the 1980s, and that price was sacrificing the working class. Initially, few people cared about this since the middle and lower-middle classes felt secure. The French author Christophe Guilluy (Twilight of the Elites: Prosperity, Periphery and the Future of France, 2018) recently described how the new model has weakened not only the proletariat but society as a whole. He points to the paradox that global capital’s success is its greatest weakness: that globalisation have made societies richer but inequalities greater, that the wealth benefits the already wealthy while unemployment, insecurity and poverty increase. It has meant the decline in jobs and workers’ pay and conditions, the introduction of technology and the transfer of finance capital across borders without taking account of its social costs, maximising profits at the expense of workers in Australia and the developing nations. Social coherence has been sacrificed. For these reasons, the hike in fuel that started the Yellow Vest movement was only the spark. Its root cause and the accompanying rage run much deeper.

Class struggle is not a fiction of the left and the politics of envy are a healthy alternative to the rising inequalities and the dismantling of the welfare state. Indeed, if we ignore the ultra-right infiltrators, agents provocateurs and criminal elements, the Yellow vests are most recent example of the resurgence of class and class struggle in a developed Western nation. On one hand, there are the wealthy whose government has abandoned the Solidarity Wealth Tax (Impôt de Solidarité sur la Fortune, or ISF) on the rich, reduced the cost of labour to corporations through Tax Credits (Crédit d’impôt pour la compétitivité et l’emploi, or CICE) on the pretext of increasing ‘international competitiveness’. On the other, French low income families are hit with higher costs, the destruction of public services through privatisation (hospitals, railways, post office), reductions to rent relief (Aide personnalisée au lodgement, or APL), increases to the social welfare taxes (contribution sociale généralisée, or CSG), a state pension that is no longer indexed, uncertainty over unemployment benefits, the weakening of labour protections. The list goes on. More for the already wealthy; less for the already marginalised.

Women’s issues and class issues go hand in hand. The ubiquity of women in the Yellow Vest movement is an important reminder to the left. It is women who first realize that there will be nothing left to eat at the end of the month. The situation of single mothers, who are becoming more and more numerous, is even more dramatic. But this presence is eminently revealing because one of the major characteristics of great social and popular uprisings is not just that women participate but that they are often in the vanguard (think Paris 1792 and 1871, think Petrograd 1917, think Cuba 1959). We are back to bread-and-butter issues that women frequently feel more intensely than men.

‘They are only great because we are on our knees!’

Legitimate rebellion is not effective revolution. Even if we accept that a simple tax protest has turned into a social rebellion, and in turn into a general revolt against a system that perpetuates inequality, that still does not equate to revolution. The Yellow Vests appear to be more about rage and frustration than calculated political insurgency, and the movement appears as a series of anomic, episodic outbursts of discontents than a self-conscious challenge to class-based relations of power and the will to create different social and political institutions. Was Lenin right? Is a vanguard party essential to convert rebellion into revolution, to turn righteous outrage into principled, effective and enduring social change?

Like Guilluy says, France is deeply fractured and the Yellow Vests are a reflection of the ever-widening social and cultural divisions. The movement may fade away, or its social content and political expression may change. It can still inflect to the ultra-right. The major parties of the left could return to their former complacency.

The liberal centre cannot hold. The rise of ultra-right politics proves Marx’s point – if it needed more proof – that Hegel’s ‘end of history’ has not yet arrived, that wealthy Western liberal democracies contain the seeds of their own destruction, for better and for worse, that a reactionary anti-modernism will accompany a declining capitalism ‘to its blessed end’ (Marx). The choice now is the same as it was last century: socialism or barbarism.