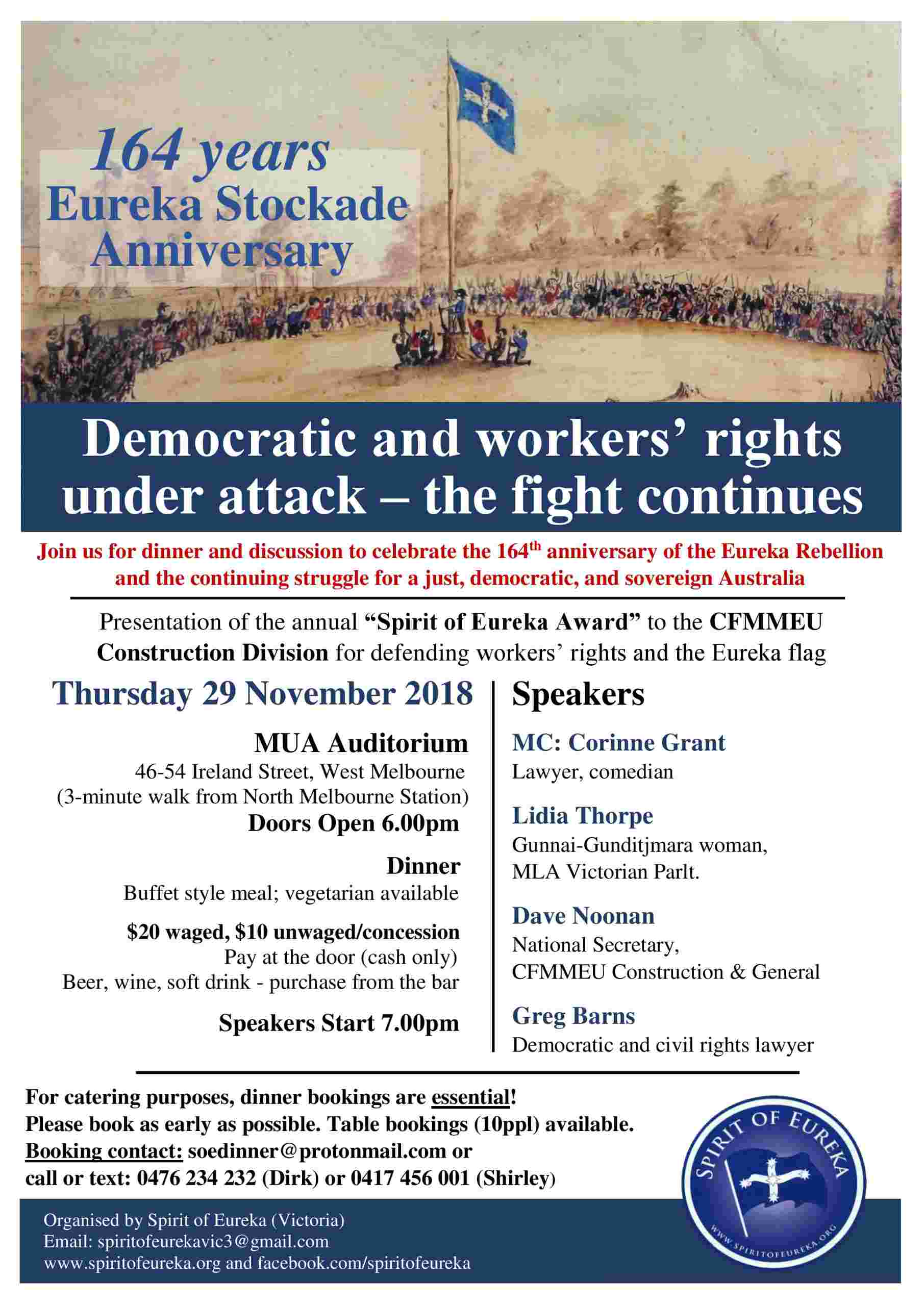 Join us for dinner and discussion to celebrate the 164th anniversary of the Eureka Rebellion and the continuing struggle for a just, democratic and sovereign Australia.

*NOW TAKING BOOKINGS!*
Catering arrangements and pricing have been finalised for the 164th Eureka Anniversary event.

*People wishing to attend the event without eating dinner are welcome. Free entry.

What is Spirit of Eureka?

The fighting spirit of the 1854 Eureka Rebellion for justice and the democratic rights of ordinary working people continues today in many of our struggles in workplaces and communities across the country.Spirit of Eureka was launched in 2004 on the 150th anniversary of the Eureka Stockade Rebellion to honour and pay tribute to this
momentous event in the history of Australia’s working people and to keep the fighting spirit of the Eureka rebels alive in struggles today.

The Eureka rebels’ flag and the vision they fought for – a just, truly democratic and independent Australia – is an enduring and inspiring legacy of unity, solidarity and collective struggle by Australia’s working people against injustice and exploitation.

Many of the issues on which the Eureka rebels took a stand 164 years ago are still with us today – the fight for workers’ rights, justice, equality, real democracy for the people, and a truly independent Australia.

The legacy of the Eureka Rebellion and its flag continues to give confidence to working people’s struggles today.

Alongside the 230 year-long fight by Australia’s First Nations’ people against colonialism, and for sovereignty and selfdetermination, Eureka is a timeless and enduring legacy in our working class history and tradition.

Eureka and its iconic flag laid the foundations for Australia’s fighting unions and organised working class movement. Eureka’s spirit of solidarity between working people is
embodied in the rebels’ powerful pledge of allegiance made at Bakery Hill on 29 November 1854.

“We swear by the Southern Cross to stand truly by each other and fight to defend our rights and liberties”.

Australia’s multiculturalism was born at the Eureka Stockade under the Eureka flag which united more than 20 nationalities, different cultures and religions. Italian-born Raffaelo Carboni, one of the Eureka rebel leaders, declared:

“I call on my fellow diggers, irrespective of nationality, religion or colour, to salute the
Southern Cross as the refuge of all oppressed from all countries on earth.”

After the Eureka Stockade rebellion had been suppressed on 3 December 1854 and the government imprisoned the surviving miners, overwhelming public outrage and days-long protests in the streets by tens of thousands of
ordinary people forced the British colonial authorities to free the imprisoned rebels and drop all charges of treason against them.

It is this tradition of collective defiance against injustice and the vision for a better society for ordinary people that keeps the spirit of Eureka alive.