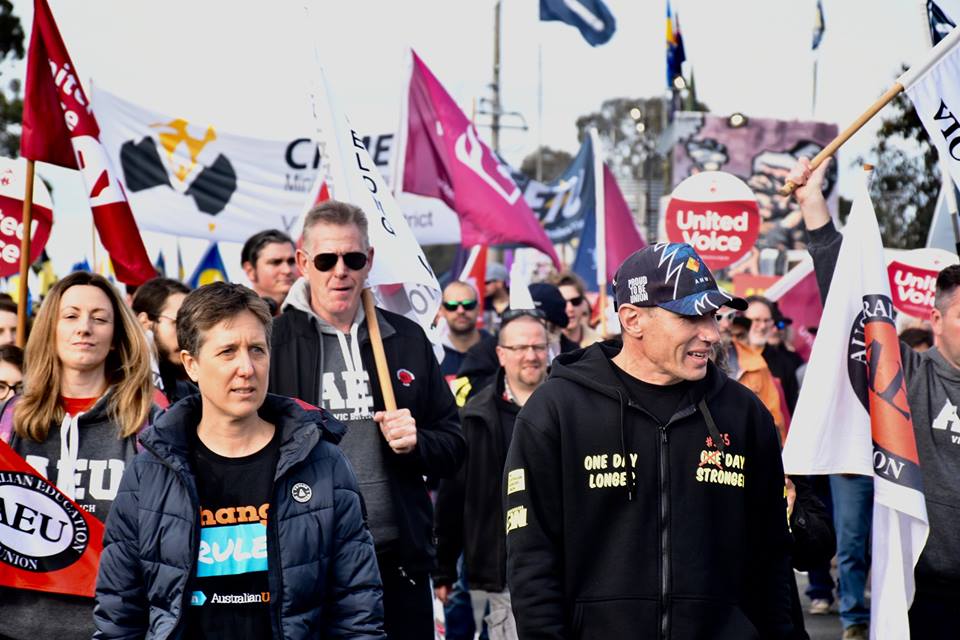 striking Longford maintenance workers delivered on June 28, 2018 marking one year in their ongoing fight against ExxonMobil and contractor UGL.

For background information on the dispute go to https://www.essouglydispute.com/

To the Longford maintenance workers,

It was seven months ago when we had the honour of awarding you the annual Spirit of Eureka Award in recognition of the inspirational struggle you are waging. At the time, how many of us could honestly have imagined that you would still be continuing the fight after more than 365 days. It would be a cause for celebration if only it wasn’t also a travesty. Nevertheless, it is an opportunity for some reflection on what is taking place and the legacy that your struggle will leave.

When members of Spirit of Eureka first heard about your dispute, we felt compelled to do what ever we could to assist your struggle. We were moved by the passion and conviction with which you spoke about the act of utter bastardry that has been committed against you as a group of workers, the underhanded way in which your wages and conditions had been stripped while all the time being completely legal under the so-called “Fair” Work Act. Unfortunately, you are not the first group of workers to be attacked like this and you probably won’t be the last.

What also compelled us was the bigger picture and the place of your struggle with in it. Your dispute was always about more than wages and conditions. Not only did it expose the complete absurdity and naked injustice of the industrial relations laws in this country, but to defend your rights meant going in to battle against ExxonMobil, one of the largest and most powerful multinational corporations in the world.

Your actions have shown that it is this fight against the multinationals which own this country that can be a great unifying force among the Australian people. When a company like ExxonMobil can make $24.8 billion in the last 3 years in this country without paying tax and say they intend to not pay a single cent in tax until at least 2021, that affects every ordinary Australian. It negatively affects everyone who uses our public schools, hospitals and transportation systems. It affects retirees and the elderly who are left to survive on inadequate pensions. It affects the unemployed and welfare recipients who are forced to live in poverty while being fed the lie that there isn’t enough money in this country for them to live a dignified existence. And ExxonMobil is just one of the many despicable tax dodgers.

When multinational resource companies like ExxonMobil and Chevron can make a killing from exporting Australia’s gas for profit while domestic gas and electricity prices skyrocket, that affects the household of every ordinary Australian.

Indigenous Australians are affected when giant mining companies take over their lands to extract resources for super-profits. So too are our small farmers when agricultural land is taken over for the same purpose.

In short, there isn’t an ordinary, everyday Australian who isn’t somehow affected by the multinational domination of this country. Your dispute is therefore a fight for all the people of this country and raises questions about the future of Australian society and the way forward to a better society for the benefit of the majority of Australians. Spirit of Eureka believes this future society lies in a truly democratic and independent Australia free from the domination of the multinational corporations and free from political subservience to other more powerful countries like the US.

Your campaign with the Tax Justice Network to ‘Make Exxon Pay’ has done terrific work to reveal the truth about Exxon’s tax dodging and has helped to expose the rottenness of the multinationals to larger sections of the population. Multinationals have probably never been more on the nose of ordinary Australians as they are now. Your dispute is now a central part of the ACTU’s ‘Change the Rules’ campaign and as it goes on and the elections get closer, we sincerely hope that you will continue to make exposing Exxon a major part of your fight. Regardless of which major party forms government at the next election, the domination of the multinationals will continue, as will workers’ resistance.

Over the past 12 months, as a group of workers in struggle you have shone a powerful spotlight on the nature of the so-called democratic rights that we have in this country, about the power of corporations and the way the laws and courts serve their interests, about the role of the main stream media, and about the importance of taking charge of your own campaign, just to mention a few. In a period of Australian history that has seen so few major industrial disputes, your fight can be a precious example to workers around the country and has the potential to teach many working people valuable lessons. But it is of vital importance that the effort is made to pass on those lessons and not to let them simply fade away when it’s all over.

We must ensure that your courageous struggle for all working people, and the many lessons it holds, takes pride of place and is never forgotten in the proud history of Australia’s working people.

Whatever the outcome, we continue to be inspired by your determination, courage and collective discipline, and stand in complete solidarity with you and your families.