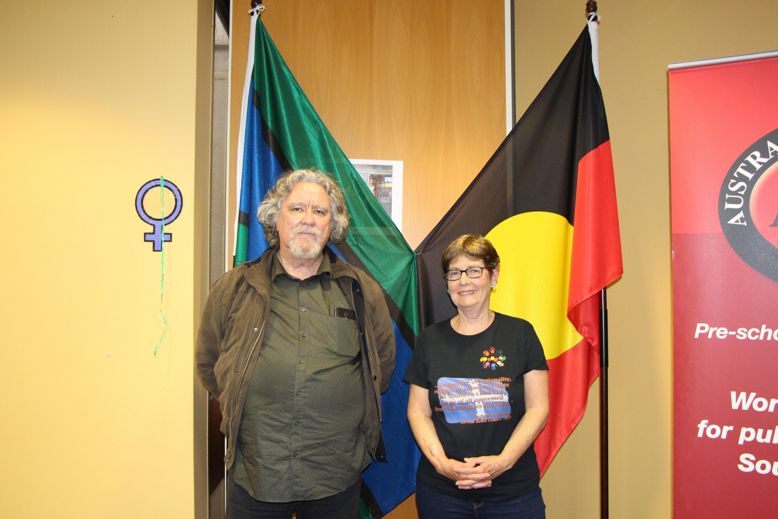 I firstly acknowledge we gather in the occupied sovereign territories and un-ceded homelands of the Kaurna People. I acknowledge the homelands of the Kaurna have been colonially acquired through theft and murder under the doctrine of terra nullius, a doctrine maintained to this day through deceit, denials and the maintenance of a constitutionally endorsed Status quo. I sit in Kaurna country as a respectful guest and with deep regard for the Kaurna People and Elders.

Firstly, I thank Lindy Nolan for penning such a thought provoking book, Driving Disunity is a timely and much needed analysis of the power dynamics between big business, government agencies and First Nation Peoples. I thank also those from the Spirit of Eureka for inviting me to say a few words here today for the launch of Lindy’s book here in Kaurna country.

If we were to then ask how effectively are First Nation Peoples maintaining our own cultural benchmarks, our own sense of health, our own sense of belonging and connection to Country, and our own self-determined futures within the framework of our own Law and according to our own Ancestral values, beliefs and practices the answer becomes much more complex.

I have always pondered when viewing early photographs of the imperialist/colonial invasion and those photographs particularly taken in Eora country where I can say with reasonable confidence that for the very first time the People of Eora nation began to wear colonial clothes and blankets. The question for me, is not that they are wearing the colonial coat and blanket but rather, what were the conditions that brought about the wearing of the oppressors clothes and what has been the impact of wearing the colonial coat and blanket upon our People?

I have long likened the acts of colonial invasion and the continuing colonising of First Nation Peoples to a colonial beast. Deeply embedded in the DNA of this beast is a predatory and mercenary like nature. The colonial beast absorbs, regurgitates, re-bottles, changes the labelling and re-brands the snake oil that is terra nullius, over and over and over again.

The colonial beast of its own accord will not change its inherent nature any more than a bow-legged Magpie can of itself change its colour, it is, what it is. The colonial beast like every animal leaves its tracks, acts according to its nature and has well established patterns of behaviour. If, we can begin to see and recognise these tracks and understand the nature of the colonial beast and know it according to its well-established patterns of behaviour who then, would not see the carnage it leaves in its wake, who then would not see its 230-year legacy of dispossession, destruction and attempted annihilation of First Peoples culture and homelands, who then could not predict the ultimate outcome of its endeavours?

What Lindy Nolan establishes through her research and clearly presents throughout her book in a very effective respectful and sensitive manner lifts the veil of well-constructed perceptions and lays bare the tracks of the colonial beast and makes very clear its well-established pattern of behaviour.

In my Peoples Ku Ku that is to say in our language, we have a word Dajiway. This one word depicts the law of reciprocity and is the tap-root of the world’s very first economy… And whilst, of course, it is called by different names in different areas across this continent, it is, an economy based in speaking truthfully, caring and sharing and of knowing and respecting each other’s country and boundaries through ancient treaties established through oral agreement and still acknowledged and maintained to this day. This economy kept our ancestors safe, well feed, healthy, strong, self-determined and free-moving.

To think this country once reverberated with some three hundred distinct languages, languages that have in a mere blink of an eye, been systematically reduced to a mere thirty, and even these are endangered and will in all likelihood be all but gone in your grandchildren’s time.

I have no hesitation in saying Lindy’s book is an insightful read and I think will begin to take those who dare to read it a long way toward the lifting of this colonial blanket, a blanket that ultimately will take many hands to lift.

In our Law we have what can be referred to as the three stones. These three stones have been handed down from the first sunrise through generation to generation, these stones never change and are well known throughout this continent. Of the three stones we say, number one is that, in our law we tell the truth, number two, we care and share for each other, and number three, this is our country.

In order to cast off the colonial coat in order to begin to lift the colonial blanket, in order to pierce the veil and unburden this country from the yoke of colonisation in its current regurgitation and re-branding, truth, caring and sharing for each other and the acceptance of the very real fact that this country was and always will remain the homelands of highly civilised, articulate, ingenious, respectful, highly sophisticated, inventive nations of lawful and law-abiding human-beings made up of many clans, held together through law and kinship and expressed through many languages. I would think, these three stones must also be the foundation underpinning any real and meaningful change for the betterment of First Nation Peoples.

I have over the years sat in on a number of meetings between First Nation Peoples and Government agencies, and big business both in my family’s rainforest country and here in the APY lands of the western desert region and there is always, always, one fundamental power dynamic at play and it goes like this: one side of the table is lined up ready to eat their breakfast, whilst, the other side of the table are trying everything in their power not to be the breakfast. These so-called negotiations, consultations and reviews always end in a take it or, leave it but, we are going to do it anyway scenario.

When you witness this power dynamic wielded by government agencies and big business, how could anyone by any stretch of the imagination determine that any so-called negotiation or consultations are carried out “in good faith”, or, “on any kind of level playing field”, forget about sitting down as equals and respecting our rightful political sovereign status as First Nation Peoples that does not happen. This very same power-dynamic has been in play so since 1788.

I would encourage all my Brothers and Sisters in First Nation communities, trade unions and the many community activist to get hold of Lindy’s book, create a reading circle, reflect upon its content, discuss it, debate it, plumb its depth, plunder through its many insights and begin to recognise the very well established pattern of behaviour of those whose only objective though obscured behind the duchessing and the finery of words, remains motivated only by the maximisation of profit.

In closing, I think it is vitally important regardless of the organisation we belong to or the movement we support that we vigorously question the power dynamics of our organisation or, movement in relation to First Nation Peoples. Colonisation is indeed a strange beast and simply maintaining the established status quo will never shift the status quo.

I would like again to thank Lindy Nolan for her contribution. Lindy’s book Driving Disunity will, I am sure, go a long way toward the long journey of de-colonisation.

Thank you all for listening.