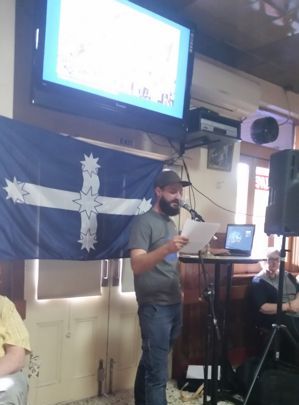 Before I start I’d just like to quickly say 2 things.

First, I’d like to acknowledge the traditional owners of the land on which we meet tonight, the Wurundjeri people of the Kulin nation, and pay my respects to their elders past and present. I also acknowledge that sovereignty of this land has never been ceded, and that it always was and always will be Aboriginal land.

Secondly, as the speaker from the Spirit of Eureka for tonight, I’d like to say a few words of thanks.

First to the Railway Hotel for hosting us this evening, and for putting on such a fantastic dinner. It’s no easy task to prepare meals for this many people, so it’s greatly appreciated.

Secondly, I’d like to thank everyone for making the effort and coming along tonight to celebrate the 163rd anniversary of Eureka. I believe it’s very important to celebrate and mark historical anniversaries, especially one like the Eureka Stockade, whose legacy has played such a pivotal role in the struggles of Australia’s working people for a fair, just and democratic society.

But I also believe it’s not enough to just remember these events as historical abstractions, confined to some by-gone era. But that what is most important is we draw the connections and lessons to the struggles that we are fighting in the present, and realise that we are the inheritors of that history and we should hold high the ideals of the working people who have fought before us.

Which is why I’m so pleased and honoured to have a special delegation of workers here tonight from the picket line in Longford, whose struggle against one of the world’s largest multinationals in ExxonMobil, and their fight to defend the wages and conditions, of not just themselves, but of all Australian workers, I believe, really exemplifies the spirit of the Eureka rebels today. So, I’d like to thank them for coming and for being such a central part of this celebration tonight.

And I’d like to give a special thanks to Mal Wood and Troy Carter, two of the delegates from the Longford dispute, for their enthusiasm and willingness to get involved. I think I speak for all of the Spirit of Eureka members when I say if tonight helps to further your struggle in even the smallest way we will consider it a great success.

“Remember how the miners at Eureka’s Stockade fell!
If need shall rise, ere Union dies, we’ll fight like them as well!”

Those rousing words of Drake written in 1890 remind us that the tradition of courageous and militant struggle shown by the Eureka rebels in Ballarat 163 years ago has always had a powerful influence on Australia’s working class and our unions.

Indeed, the Eureka rebellion is the spiritual birth place of Australia’s union movement as we know it today.

In fact, I see a great similarity between the two.

As most of you would know, ostensibly the major grievance of the diggers that would lead them down the historical path to that fateful day on December 3rd 1854, when dozens of them lost their lives in the attack on the Stockade, was the oppressive conditions of the miner’s license. It was an immediate and day to day concern.

Our union’s too, fight to improve the day to day, immediate conditions of workers. But like the struggle of the Eureka rebels, in reality we fight for so much more.

In 1854, they rebelled against a brutal British colonial government that imposed taxes in the form of the miner’s license on the impoverished miners scrapping out a living, while the ruling classes, the rich squatters and aristocracy, paid no tax.

(Replace squatters and aristocracy with multinational corporations, and you have to wonder just how much has really changed 163 years on!)

They rebelled against the constant police harassment and abuse. And they rebelled for the right to vote and to decide how laws that affect them should be made.

The struggle of the diggers was for justice, for democratic rights, and independence. At its core was a vision for a fairer, better society for ordinary people.

Our union movement too fights for more than just wages and conditions. It fights for justice. It fights for equality. For democratic rights and fairness. And at its core too lies a vision of a better society for ordinary working people.

For well over 100 years Australia’s working class has raised the Eureka flag as an inspirational symbol of what we fight for in our struggles.

One of the first recorded instances of Australian workers rallying under the Eureka flag was in 1891, during the Great Shearers’ Strike in Queensland. It’s believed at least 3000 striking shearers gathered under the flag at the shearers’ camp near the town of Barcaldine in protest against attacks on their union wages and conditions.

And they carried the flag high through the town on May 1st in one of the first May Day marches in the world.

And it has continued to fly over the countless struggles of working people and communities around the country ever since.

For me personally, as a construction worker, I take great inspiration from the history of the militant Builders Labourers Federation, the BLF, who adopted the flag as their own on the hundredth anniversary of Eureka in 1954 and proudly rallied under it throughout the struggles of their remarkable history.

And it’s a tradition that has carried on in to the CFMEU today. But it’s not just a flag for construction workers.

It was there when meatworkers in Brisbane picketed in the 1960s.

It was there when shipbuilders went on strike and occupied the dockyards of Cockatoo Island in Sydney Harbour in 1989.

It was there when the entire union movement and wider community fought to defend the wharfies and the MUA in 1998.

And it was there in the massive rallies around the country when we took on the Howard government’s ‘Work Choices’ in 2006 and 2007.

It flew high above the camp of the maintenance workers at CUB in their 180-day epic struggle last year.

And today it flies high at the camp of the coal miners at Oaky North in Queensland who have been locked out of their workplace by foreign multinational mining giant, Glencore, for over 140 days.

And of course, it flies proudly at the camp of the Longford maintenance workers in their determined and courageous fight against ExxonMobil, whose struggle we pay tribute to tonight.

And undoubtedly it will continue to fly over the struggles of Australia’s working class in the future. Because that’s what it is. The Eureka flag is unashamedly the working peoples’ flag of struggle.

And whenever ordinary working people come together to take a stand for their rights and liberties, for justice, and a fair go, then the example of the Eureka rebellion will be relevant.

And the flag the rebels raised 163 years ago, that flag of resistance and defiance, will continue to inspire unity, solidarity, and courage in our collective fight for workers’ rights and against unjust laws.

Unions and their working class agenda

There’s no denying that the working class and the union movement in Australia are facing a lot of challenges at the moment.

Industrial relations laws in Australia are some of the strictest and harshest in the developed world. The right to organise has been severely curbed. The right to strike is, for all intents and purposes, non-existent.

We have political task forces like the Australian Building and Construction Commission whose role it is to intimidate and threaten workers who dare take a stand for safer workplaces, and who have the power to reduce construction workers like myself to second class citizens by denying us the right to silence; a basic democratic right granted to even the worst criminals.

We are facing corporations who are unscrupulously terminating enterprise agreements to savage hard fought for wages and conditions of workers around the country.

Giant oil and gas multinationals are making billions off Australian resources and are getting away with paying no tax, while ordinary working people are getting squeezed with higher and higher energy bills, while our public schools and hospitals are denied the adequate funding they so desperately need.

Workers and young people face precarious futures as good full-time jobs are being destroyed by casualisation, part time work, and dodgy subcontracting arrangements, not to mention automation and the offshoring of jobs as well.

Because I know that when workers stand together shoulder to shoulder united in struggle;

Because I know that when we come together to fight for the best interests of all working people;

Because I know that when we stand defiant, determined and united;

Because I know that when we remember the spirit of Eureka,

And I believe that’s what we should aim to do.

So to finish up, I want to come full circle and finish the way I started. With another poem. And it’s a poem that I think captures, not necessarily the tasks that face us ahead, but the spirit in which we need to face them. And it goes something like this…

“So we must fly a rebel flag as others did before us,

And we must sing a rebel song and join in rebel chorus.

We’ll make the tyrants feel the sting o’ those that they would throttle;

They needn’t say the fault was ours if blood should stain the wattle!”