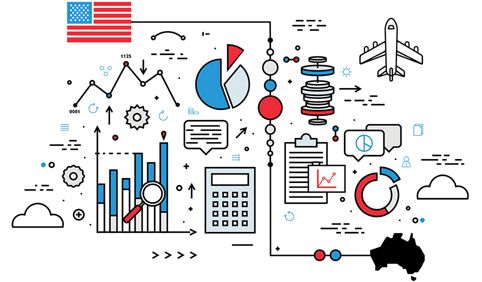 The size and scope of US investment in Australia, and the degree of subservience shown by our political leaders to US imperialism, confirms our analysis that US imperialism is the major obstacle to a free and independent socialist Australia.

In a recently released paper, the United States Study Centre at the University of Sydney does its best to portray the US-Australia investment relationship as one of “indispensable economic partners”. However, its own figures clearly show that it is not a partnership of equals.

The US is the no. 1 source of foreign direct investment (FDI) in Australia, and has been for many years. Australia is the seventh largest target for US FDI. Australia is the recipient of more US FDI than all of South America, Africa, or the Middle East, receiving well over twice the amount that China does.

It is not just that Australia is small fry compared to its “investment partner”, the US.  Nominee companies comprising the major shareholders in most Australian companies are notoriously opaque. It is difficult to know the source of investment capital in bodies such as HSBC Custody Nominees (Australia) Limited, J P Morgan Nominees Australia Limited, and Citicorp Nominees Pty Ltd. Capital raising by share offerings is also only one source of a company’s operating funds.  Frequently companies turn to Australian banks for loans, or to overseas sources of finance. Hence a company may appear to be Australian owned but mask a substantial proportion of overseas (and US) capital. If Australian companies investing in the US are using US funds then US investors and debt markets can be large beneficiaries of “Australian” investment in the US when interest is added to loan repayments.

This is conceded to some extent in the report, which notes that “US capital markets, especially debt markets, are a vital source of capital for Australian companies, especially the banking and financial services sector. Australia’s “Big 4” banks (Commonwealth Bank of Australia, Westpac, National Australia Bank, and the Australia and New Zealand Banking Group) are the four largest ASX-listed companies and account for nearly one-quarter of the total market capitalisation of the ASX 300. The Big 4 banks are heavily reliant on wholesale funding from US debt markets. Due to foreign exchange markets, the depth of US debt markets, and interest rate derivatives, the United States is the overwhelming source of that funding.”

Growing concern about Chinese investment in Australia cannot be dismissed.  China is an economic powerhouse and globally, the major competitor facing the US.  However, China currently has only 10% of the value of US FDI in Australia and no ability at the present time to supplant the US as political master of Australia’s destiny.

To summarise, Australia is an unequal partner in its investment relationship with the US.  The latter currently easily surpasses other countries as a source of FDI in Australia. It is right for us to be wary of Chinese investment; however, the political loyalties of the Australian bourgeoisie are with US imperialism.  It is correct to describe Australia as enmeshed in the economic, political, social and military web of US imperialism. It is not strong enough to act as an imperialist power in its own right; indeed, it is a sign of its weakness as an independent nation that its Prime Minister believes his own country and the US imperialists to be “joined at the hip”.

The path to an independent and socialist Australia lies through the struggle to break the power of US and other imperialisms in Australia, to seize and nationalise their assets and lay the foundation for socialism.
………………………
Sources: