In 1974, student activists occupied the Registry at Flinders University, South Australia for 28 days during August. This was the longest student occupation of a university in Australia. Not even Governor Sir Mark Oliphant could persuade them to leave. In the film video, “Slam the Exam”, memories, stories and original footage take us back to the heady days of 1970s. “Slam the Exam” was produced by Media students from Flinders University thirty years later, 2004.

Two important documents were produced by students in the aftermath of the Flinders Uni occupation: Discipline at Flinders and Roger Russell and Australia’s Universities: The Pentagon’s Trogan Horse? Both documents give a vivid account of the pertinent issues that were impacting campus life at the time – Exams, assessment and staff/student control of course content; and the penetration by United States military and corporations of universities through academics who carried out research for them in Australia.

Below are the forewords of both documents which give the viewpoint of the occupation students at that time.

Council and conservative academics on campus have attempted to present Discipline affecting an insignificant minority: a few malcontents, misfits or potential drop-outs. In fact, Discipline effects every member of the university, especially, of course, students, but also those academics who take education role seriously and teach in a way which enables students to gain a better understanding of the world around them.

The Flinders Education Department in its booklet “Diploma of Education”, describes a University as an institution whose function is essentially:

“to conserve, to transmit and to extend knowledge”

and whose principle concerns and educational aims are:

“the development of educational skills”

Such abilities are then supposed to be applied to

“the practical concerns of society”.

However, there is a contradiction between educational theory and the practical educational aims of Universities. In the present climate, Universities are becoming less and less institutions which provide a general education as well as developing employment skills and more and more institutions which turn out graduates designed to fit into a niche provided for them by big business and the Government bureaucracies – but with a limited education, that is, limited “intellectual independence” and “critical and constructive thinking abilities”. Neither big business, nor the Government bureaucracies want employees with highly developed critical faculties. What they do require is specialist s who are trained to do a particular job, preferably without thinking too much about its purpose or who it serves.

Those students who, in spite of the quality of education in many sections of the University, manage to develop “intellectual independence” and the ability to critically, tend to become critical of the system in which they are operating, both inside and outside the University. It is these criticisms and the student demands and actions which may arise from them which Discipline Statue 6.4 is meant to contain.

The University is rigidly controlled by the University Council in which senior Academics and representatives from the business world form the majority. In order to channel education into the ends they want it to serve, they need to exercise a virtual dictatorship over the University. Such dictatorship can only be maintained if Discipline is rigidly applied. Any dissent whether it is questioning the content or aim of courses, the purpose of examinations, or biased marking etc. has to be silenced or channeled into dead-ends, or no-solution areas, such as investigatory committees. Open debate, the free exchange of ideas etc. are tolerated only so long as they remain at the discussion level and while students make no attempt to change processes they see as contradictory, unfair or anti-educational.

The struggle over Discipline which has occupied many people in the University over a period of years, is not just a debate about who shall be disciplined, about what and by whom; it is also a struggle about Education within the University, what it means and who it serves. 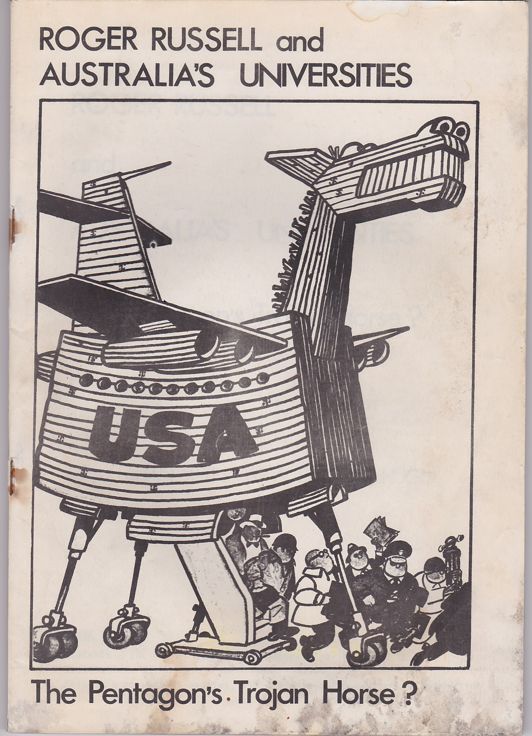 This booklet is a case-study of a growing phenomenon – the infiltration of the Australian education system by academics and administrators who pursue the aims, and fulfill the needs, of the United States’ imperial apparatus in its multifarious forms. Professor Roger W. Russell, Vice Chancellor of Flinders University in South Australia is the object of this case study. Russell’s case is a classic and prominent example, but there are many others who fulfill similar roles in Australia’s Universities, CAE’s and other sections of the education system.

This academic infiltration is the natural outcome of the growing U.S. domination of many vital aspects of Australian life. Economically, the U.S. has a huge investment in vital sections of the Australian economy – e.g. natural resources, manufactures, communications, automobile industry, advertising, food and beverages, pharmaceuticals and publishing. Australia is the U.S.’s fourth largest investment area and it also serves as the “springboard” for U.S. companies involved in exploiting the Asian resources and markets. Militarily, Australia is a crucial link in the world-wide intelligence and “first-strike” network maintained by the U.S. Department of Defense. There are about 30 U.S. bases and military installations on Australian soil, the most important being N.W. Cape and Pine Gap. Culturally, we are confronted at every turn with symbols and slogans promoting the U.S. way of life. Advertising, television programmes, magazines, popular music, and the news media rationalize the virtues of white, western, male-dominant, capitalist exploitation.

This domination of Australia is not an accidental or incidental phenomenon. The U.S. interest in Australia is primarily motivated by their economic exploitation of our economy and the national resources, and by our strategic location within the military system maintaining this exploitation on a world-wide scale. The U.S. currently has a firm foot-hold in Australia, but there are signs of a growing opposition to foreign dominance and exploitation of our country. This is why infiltration of the education system is of vital concern. The U.S. needs to ensure a steady supply of comprador politicians, business leaders and academic researchers. It also needs to ensure that the Australian people do not wake up to what is going on.

Compradors are people who consciously and conscientiously serve foreign interests within their own country. Comprador academics serve the interests of the U.S imperial apparatus by rationalizing the U.S presence, by promoting further comprador academic control of important areas of education, and by opening our academic resources to infiltration and exploitation by U.S. interests. Such people need to be exposed, and opposed as vigorously as it is in our power to do. Studies like the one contained in this booklet are essential part of that process, and need to be repeated in other situations. They should be done not only on U.S. sponsored research and policies, but on Australian research, consultancies, policy-making and allegiances as well. The rot is broad and deep-set, and it must be painfully extracted from every corner. It is a sad commentary on our national identity that so many of our academics are so alienated from their society that they persist in looking overseas for guidence and primary intellectual stimulation. Australia’s academic colonial mentality has of course been shifting. Formerly we had academic who wished himself back in England, whilst gazing wistfully at the picture of his college at Oxford on his office wall. Now we have a new breed of academic who plans his next sabbatical “back in the States” while on his shelf a pair of University of Michigan bookends hold upright the U.S. text books on which he bases his research.

The conclusion to the booklet gives some guidelines which will be of use to others wanting to pursue investigation and action. Further to this is the urgent need for Australia wide coordination of such action in a comprehensive manner. This is a task that properly concerns the Australian Uion of Students, amongst others and will be a major focus of activity on Australian campuses in 1975. Such activity, must be seen as the beginning of our own national liberation.