A presentation given to Solidarity Breakfast on Radio 3CR, 9 JUly 2017 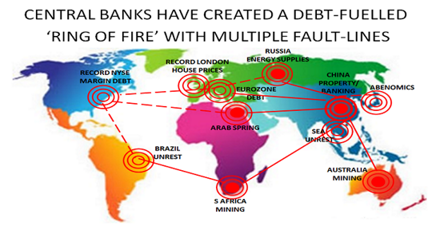 As promised last time, we’re going to look into the 2016-17 Report from the Bank for International Settlements.

Since we can’t assume that all our listeners have heard all our discussions over the past ten years, I’ll risk offending those who can remember every one of them by darting back to this time in 2007.

I’d stumbled upon the Bank’s Report for 2006-7. At the time, I didn’t know what the Bank for International Settlements was. We’ll say a bit about its history in a moment.

Remember that early July 2007, the sub-prime problems had surfaced but global capital was more than a year away from erupting into the crisis of September 2008. So you can imagine my surprise when I read that the Bank was warning that the world faced a slump of 1930s proportions. I at once wrote a two-part piece for Crikey, which they declined to publish it because it was ‘too depressing’.

I’d had a similar experience early in 2000 when I submitted an article on the dot-com bubble to the Bulletin magazine. They did not care for it. Once the bubble burst, the editor was on the phone anxious to publish, which he did.

What I wrote on both occasions came from the public domain. All I did was to bring data together and add some commentary. I mention those two rejections to underline that I’m no expert. I rely on people who are. That’s what I have done with the Bank Reports since 2007. Whatever I’ve had to say about the prospects of the global economy has been grounded on the forecasts from the Bank for International Settlements.

As soon as the Bank says it’s all clear air ahead, then I shall stop warning about the likelihood of another crash.

So, what does its latest Report say?

This time, there is no one-liner. There’s no ‘1930s-style crash’. No ‘postponing the day of reckoning’ as the Bank put it in 2014. And there’s no allegation that remedies by governments and corporates since 2008 have only made that day of reckoning worse when it inevitably arrives. Or, as the Report still puts it: ‘when tomorrow becomes today.’

The first point is to stress that the Bank is not retreating from its warnings of 2014 and 2016. The day of reckoning has been postponed and its impact has been made worse.

However, those concerns are the basis for a shift in emphasis. This year, the warnings are overlain with encouragements for governments to take advantage of improvements in the global economy to reduce the impact of the next recession.

The Bank’s suggestions circle around how to wind down the Everest of debts that has built up to avoid the political and economic pain from the ten-year long implosion in the expansion of capital.

It’s not possible to convey all the complexities of the Bank’s recommendations in a radio broadcast. To get on top of its analysis and policy options, I’ve had to spend a couple of days with pen and paper – or should I say keyboard and screen.

I’ve extracted the key points and quotable sentences from the Report to put up on the 3CR website. Or you can download the 130-page Report from the BIS site to study for yourself.

We’ll come back to what its key points are after sketching the Bank’s past and its current place in the management of global capital.

WHAT WAS THE BIS?

The Bank was set up in 1930 to do what its name suggests. It was the final solution in attempts to get Germany to pay the reparations that had been imposed on it in 1919 for losing the war. Hence, its name – the Bank for International Settlements.

Some on-line sources picture the BIS as the personification of the international Jewish conspiracy.

By contrast, a 2013 book by Adam LeBor, Tower of Basel, stresses how the Bank served Hitler and his friends on Wall Street. Despite making this connection, the book’s sub-title is marketing hype:

The Shadowy History of the Secret Bank that Runs the World.

WHAT CAN THE BIS DO NOW?

This year’s Report makes it very plain that the BIS does not run the world.

For a start, it has none of the powers of the European Central Bank, the Federal Reserve or the Bank of England. It does not set interest rates and it cannot print money. The Bank has never had the clout of the IMF to control governments by depriving them of investment funds if they don’t sell-off assets and open up to the global corporates.

Rather, it’s a clearing house for information about international finance. Its staff track both central bank and commercial bank transactions.

Foreign exchange transactions alone on each and every day now exceed five trillion dollars, that is, five and twelve naughts. It is amazing that the Bank’s profit is only $427 million.

The Bank’s 600 staff service the world of finance with conferences and reports.

Far from the allegation that the BIS is running the world, it’s more accurate to say that what it has done for the past 20 years is in the title for the title of the book’s second-last chapter: ‘The All-Seeing Eye’. The Bank must be the best funded non-government think tank in the world.

Because the Bank keeps accounts of governments, commercial banks and insurers, it is well informed about the world’s financial system.

Yet over and again, the Report admits that it is hard to know what the numbers are, let alone what they might indicate about even the medium-term.

The Bank can’t even word its own Reports in the way it wants to. For instance, it is utterly opposed to Trump’s protectionism and winding back of controls over the banks. Yet it never names names. Readers have no trouble in joining the dots.

Also worth noting that the Report avoids the staggering condition of the EURO which it did so much to bring about during 1990s.

The Bank’s caution in how it voices its worries is also why if finds Trump’s policies so alarming. The U.S. dollar is emperor. There is no outside the greenback. In the language of the Report, the dollar acts a ‘fear gauge’.  P. 12

Over and over, the Report illustrates how any movement in U.S. interest rates or in the US exchange rate impacts on every other economy.

There’s more than an undertone of despair at what governments get up to, and at what they fail to do.

Unlike the IMF and the World Bank, the BIS is not the creature of U.S. regime. The Bank’s business is to manage the longer-term well-being of the entire global system.

From that perspective, the latest Report makes a lot of sense. Indeed, much of what it records and proposes provide Marxists with the chance to sharpen our understanding of how our enemy now operates.

There’s no better example than the Report’s anchoring of Globalisation to unit labour costs, (p.  ) though we think in terms of socially necessary labour-times That link deflates the waffle which treats ‘globalisation’ as everything from sex tourism to trade treaties.

The Bank ties the lowering of unit-labour costs to the decline in the power of our class to influence the price we get for selling our one commodity – our labour-power.

[That shift in the relative strength of the contending classes is discussed in regard to the current applicability of the Phillips’ curve, which spotlighted a trade-off between wages and jobs. (pp. 64-9). Those who care to follow Marx into his critique of vulgar economists will pick up the Report’s implied rejection of Adam Smith’s notion that pursuit of one’s own interests is the basis for the general good in its case against protectionism as beggaring one’s neighbour; circles around von Hayek prescriptions on how little governments can do to improve on the market (p. 17-18 ); and Say’s Law that supply always generates its own demand, thereby ruling out there ever being a glut of over-production (p. 16).]

The Bank is anxious for governments and corporates to make the most of the improvements in growth, employment and inflation. It fears that the authorities will squander this opportunity. Even worse, some will seize on pick-up to revert to the bad old ways that built up to the crisis.

To make the most of the slight tail-winds, the Bank encourages the masters of the universe to wean themselves away from zero interests rates and printing money; reject protectionism; take better care of globalisation’s victims; stamp out tax evasion; strengthen banking regulation; boost productivity and technological change. But not all at once, and not in too big a hurry or too slowly, always allowing for the needs of specific regions and industries.

That recipe for resilience and normalisation will strike some readers as the Goldilocks moment. The thought that the porridge must be neither too hot nor too cold sparked a different association in me.

Throughout the year, we’ve been talking up the 150th anniversary of volume one of Capital, which is now only eight weeks away. Reading this year’s BIS Report summoned up volume two.

Volume two has the reputation for being the hardest slog of the four volumes. It’s true that there are no ‘stories’. It is nothing but analysis and the critique of political economy. All of volume two is as demanding as the hardest parts of volume one. There are no down-hill stages in this tour de capital. You have to pedal hard for all its 600 pages.

If we can’t summarise the 130-page BIS Report, we certainly can’t do more than hint at the full riches of Marx’s volume two.

One lesson from volume two is never to be surprised that the expansion of capital seizes up from time to time. What is amazing is that capitalism ever functions at all.

I can outline why that is so by mentioning the three sections in the volume.

Part one traces three circuits of capital. Marx shows how money-capital, production goods and vendible commodities have to feed in and out of each other at every second of the day.

Part two looks at the different turnover times required for the different production goods. For instance, labour turns over on a weekly, even a daily basis. Production equipment can last for years and raw materials for anything from a few hours to years.

Part Three examines the tensions between outlays on plant and equipment against spending on consumption goods by capitalists and wage-slaves.

Each of the three realms contains its own trip-wires. Yet for capital to keep expanding, every element in all three has to operate at the same time.  The chances of their doing so smoothly are not great.

How can these conflicting forces be driven towards the expansion of capital? Only by crashing the gears.

The Bank’s Policy Options confront some of these issues and touch on others. Despite its recognition that the current improvement might turn out to be yet one more ‘false dawn’, and that the skies will darken again, its authors cannot rid themselves of the hope of returning to the old normal. They cannot absorb that their system is inherently unstable and crisis prone.

Part of the reason for this failure is that they are fixated on financial flows. The Bank assumes that they can be explained apart from the circuits of production.

To rid themselves of that delusion, they need to make a close study of the opening part of volume II.