(For the 75th anniversary of the first of the Menzies addresses over Sydney radio station 2UE on 22 May 1942, Howard and his gang are in the business of promoting ’the greatest speech ever made in this country’.) 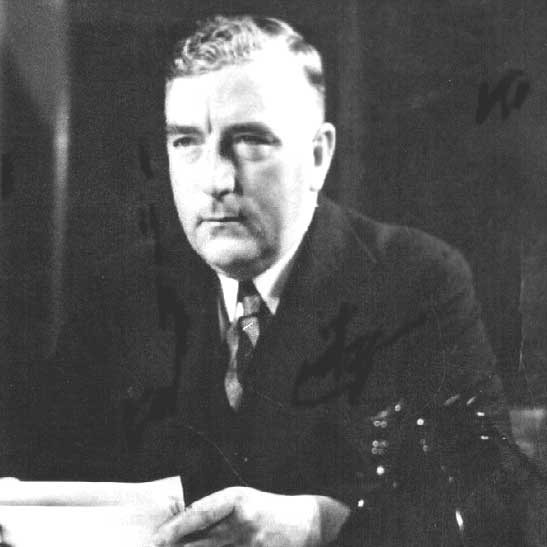 Part I documented the class bias in the eugenic underpinnings to Menzies’ ‘Forgotten People’ radio broadcast. Here is a further morsel: to say that the industrious and intelligent son self-sacrificing and saving and forward-looking parents has the same social deserts and even material needs as the dull offspring of stupid and improvident parents is absurd.

Here is the voice of privilege and entitlement which had found a scientific gloss in Eugenics as an ideological pillar for fascism to beat back proletarian challenges during the first half of the twentieth century.

Once Menzies engaged in Victorian parliamentary politics from 1925 on, his earliest and closest ally was the self-proclaimed fascist (Sir) Wilfred Kent-Hughes. Menzies kept his reactionary principles within the bounds of the Constitutional Club. However, desperate times provoked extreme images.

In reaction to Lang’s threat to ‘repudiate’ interest payments on Australian debts to British bondholders, R.G. Menzies told a Pleasant Sunday Afternoon in a Melbourne Methodist Church in May 1931:

If Australia were to get through her troubles by abating or abandoning traditional British standards of honesty, or justice, of fair play, of resolute endeavour, it would be far better that every citizen within her boundaries should die of starvation within the next six months. (Argus, 4 May 1931, p. 6.)

We can be confident that Mr Staniforth Ricketson of Capel Court would be among the last survivors along with his clients for whom he had just bought some twenty-three million dollars in U.S. bonds at about 25 to 40 percent of their par value.

When, in May 1942, Menzies came to identify the sections of the population who were in his ‘middle class’, he did so by excluding

… at one end of the scale, the rich and powerful; those who control great funds and enterprises, and are as a rule able to protect themselves …

I exclude at the other end of the scale the mass of unskilled people, almost invariably well-organised, and with their wages and conditions safeguarded by popular law …

These exclusions being made, I include the intervening range, the kind of people I myself represent in Parliament – salary earners, shopkeepers, skilled artisans, professional men and women, farmers, and so on. These are in a political and economic sense the middle class. They are envied by those whose social benefits are largely obtained from taxing them.
…

They are not sufficiently lacking in individualism to be organised for what in these days we call pressure politics.

By organising these strata into a new political party, erstwhile prime minister Menzies planned his comeback on behalf of the ‘rich and powerful’.

The picture that Menzies painted was false. In no sense were the middle-class the forgotten people. Above all, their ‘individualism’ had strict limitations.

First, the ‘professional men and women’ had associations to protect their interests. No trade union was as powerful as the British Medical Association as it was then known, or the tied houses in the Australian Hoteliers Association. Institutes of architects, surveyors and accountants restricted entry and set standard fees.  Shopkeepers, pharmacists, confectioners, brewers and soft-drink manufacturers all maintained what they called ‘Price Protection’, as did printers and brick-makers. Caught rigging ‘competitive’ bids for government contracts in 1911, the N.S.W. Master Builders defended the taking of ‘illegal commissions’ on the grounds that they were ‘universal and world-wide and should be recognised as such.’ The N.S.W. M.B.A. would enter the same plea when caught red-handed eighty years later.

In the rural sector, governments endorsed this ‘orderly marketing’ with boards for almost every item on the meal table – bread, eggs, milk and sugar.

The Southern Grocer reminded its subscribers that ‘price-protection is, and must always, remain the very first and foremost plank in any fighting platform worthy of the name, and hang the public!’ (20 April 1912, p. 623; see also 20 May 1911, p. 5.)

Judith Brett’s uncovering of a moral middle-class knows nothing of this chicanery because she, like most scholars, never soils her fingers with ‘trade’ to include any of the hundreds of its publications in what her bibliography calls ‘Rare periodicals’.

If the middle-class were not forgotten, what was Menzies getting at? The answer is how the parties of urban capital had been financed, and thus controlled. Menzies knew who paid the piper and pulled the string because he had been a leading player.

In 1931, Staniforth Ricketson descended from gambling with bonds at the stockbroking firm of J.B. Were to rigging governments. Alarmed at the unorthodox views stalking the Federal Labor administration, he held meetings in his offices the  ‘the Group’ of six prominent Melbournians to get the ex-Labor premier of Tasmania, Joe Lyons, to rat and accept the leadership of a new political force – which became the United Australia Party. Menzies was ‘the Group’s’ legal leg man and political points man. (See P.R. Hart, ‘Lyons: Labor Minister – Leader of the U.A.P’, Labour History, 17, 1970, pp. 37-51.)

That Menzies never had to ask Ricketson for favours is obvious from the letter that Menzies wrote as he was preparing to go ‘Home’ in February 1935: I cannot leave Melbourne to go abroad without telling you how much I appreciate all your many acts of kindness and friendship during the past few years  … Pat and I will carry with us tangible souvenirs of the generosity of Gwen and yourself and our little group, but I can assure you that the most valuable souvenir will be the constant recollection which we will carry with us of 1000 acts of kindness. (19 February 1935)

Here again is ‘the Group’. The academic biographer of Menzies records that one kindness was Ricketson’s readiness to handle aspects of Menzies’ personal finances, in which the latter’s lack of practicality would soon become notorious. To help release Menzies from such worries was perhaps at this point, where political activity was seriously interfering with his professional life, the most practical gift Ricketson could confer on his friend. (A.W. Martin, Robert Menzies, A Life, I, Melbourne University Press, 1993, p. 141.)

Among the ‘details’ which Martin liked to believe ‘are no doubt lost for ever’ is that Ricketson in 1936 set up an Investment Trust with nominal capital of one million pounds, with Federal Attorney-General Menzies as a director. There are more ways of rewarding a fox other than the bribe direct. (Robert Murray and Kate White, ‘Staniforth Ricketson’, Australian Financiers, Macmillan, 1988, pp. 320-1.)

As the beneficiary of public housing in The Lodge, Menzies left office in January 1967 without a roof over his head – or he would have done had not a another group, this time led by CRA’s Sir Maurice Mawby, purchased a modest villa in Haverbrack Ave, Malvern, placing it in trust for Dame Pattie Menzies. The admirers also provided him with serviced offices at top end of Collins street.

In no sense was Menzies forgotten by those whose interests he served.