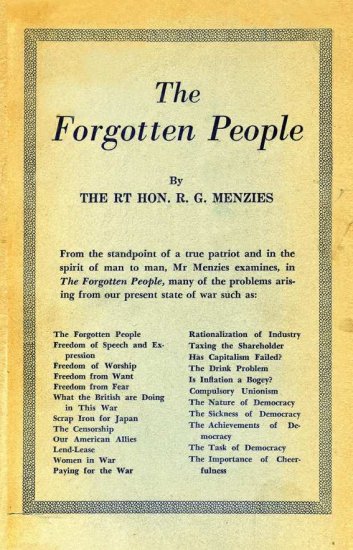 For the 75th anniversary of the start of the Menzies radio addresses, Howard and his gang are in the business of promoting ’the greatest speech ever made in this country’. The fact that ‘The Forgotten People’ was not a speech but one of a series of wireless broadcasts is the least of their lies. Their Big Lie will be to conceal what their hero had dared to say.

Ming was trying to make a comeback after losing the prime minister in late August 1941. In the heat of the grimmest months of the war for the Pacific, Menzies diverted attention from the fight against Nazism and Japanese militarists to peddle the fascist ideology of eugenics.

To say ‘fascist’ is not abuse but an objective assessment of the mentality of those times. Ros Pesman Cooper documents how swatches of the middle-class throughout the 1920s ached for a strongman of their own’ – a Britisher, of course, not a wog or wop. (‘ “We Want a Mussolini”: Views of Fascist Italy in Australia’, Australian Journal of Politics and History, 39 (3), 1993, pp. 348-66.) Reminding students of this heritage is not part of the national history curriculum.

The Institute of Architects awards a Prize Medal in honour of Florence Taylor as a feminist architect but erases her vicious fascism. In 1925, she called for the criminalising of union membership and praised Mussolini because he had:

“prohibited three or more persons being assembled together. It left no loopholes for evil plotters as we leave for strikers to assemble for intriguing and scheming, for the wrecking of industry.” (Newcastle Construction, 12 November 1925, p. 7)

Taylor was far from alone in these attitudes. Several of her leading male confreres, such as General Rosenthal, the model for ‘Kangaroo’ in the eponymous 1922 novel by D.H. Lawrence, and General Talbot Hobbs in Perth, were anxious to put their battlefront experience at the service of the bosses. (E.K.Teather, ‘Fascism and Australian Town Planning Propagandists: Some Implications’, Australian Journal of Politics and History, 40 (3), 1994, pp. 335-50; ‘The Taylors, Sir Charles Rosenthal and Protofascism in the 1920s’, in R. Freestone (ed.), The Australian Planner Proceedings of Planning History Conference, School of Town Planning, University of New South Wales, 1993, pp. 102-11.)

Eugenics became one of the pillars of fascist policy. They were weapons in the counter-revolution to suppress the proletarian upsurge that began around 1910 and took state power in Russia in 1917.

Eugenics is a class question. Its founder Francis Galton had dreamed up the statistics to show why his family had produced so many geniuses – including himself. By 1900, eugenics had been divided between those who wanted to prevent those they deemed ‘unfit’ from breeding against a minority of eugenicists who advocated sweeping social reforms to remove the sources of inequalities. Here the contest was between compulsory sterilisation or the welfare state.

Negative eugenics found one of its everyday forms in the Racial Hygiene Association founded in Sydney in 1916 – which latter cleaned up its act by rebadging as the Family Planning Association. Laws for compulsory sterilisation were debated in every Australian State. Most Professors in the life sciences at the University of Melbourne set up the Eugenics Society in 1936, chaired by Zoology Professor, W.E. Agar, an episode air-brushed from the Australian Dictionary of Biography, volume 7.

The first step was to control ‘the unfit’, the mental defectives and feeble-minded – as the learned ones defined them. But this call for forced sterilisations was but the tip of the iceberg of class warfare. The underlying fear was that the workers were breeding faster than their betters. The unfit also happened to be Irish catholics; at that time, the Irish were considered to be a distinct ‘race’. The class and race streams of eugenics flowed together as they did for the stolen generations.

One measure of the acceptance of class-based selective breeding is the textbook prepared for Leaving Certificate students in 1931 by two small-l liberals, E. Ronald Walker and R.B. Madgwick, An Outline of Australian Economics, which gave almost a page to what they sub-headed as ‘Eugenic Control’:

“One other problem must be mentioned. In any community there are considerable differences in ability among individuals. These differences are only in part due to environment, and certain physical and mental defects are known to be hereditary. Some biologists have suggested that we should try to breed people just as carefully as we breed racehorses or prize cattle. Now, if this could be done the productive quality of the people might be improved. But our knowledge of the laws of heredity is still to imperfect to warrant much action, even if public opinion were in favour of such a radical proposal.

“Nevertheless, there is every reason to prevent propagation by the mentally deficient, who often have large families of feeble-minded children. Some countries have made some experiments with segregation and even sterilization, but there is much more scope for preventive measure of this kind. If the worst stocks multiply more rapidly than the others, then the quality of the population will be impaired.” (pp. 68-69)

What is telling is not that these views were being pushed to school children in 1931 but that the paragraphs reappeared unaltered through to the ‘revised and enlarged’ fifth edition in 1953.

Negative eugenics was the scientific consensus and conventional bourgeois wisdom of the era out of which Menzies delivered his comeback broadcast in which the following paean to the bourgeoisie – Ming’s ‘Forgotten People’ is pivotal:

“First: It has a ‘stake in the country.’ It has responsibility for homes – homes material, homes human, homes spiritual.

Second: the middle class, more than any other, provides the intelligent ambition which is the motive power of human progress.

Third: The middle class provides more than perhaps any other the intellectual life which marks us off from the beast; the life which finds room for literature, for the arts, for science, for medicine, and the law.

Fourth: The middle class maintains and fills the higher schools and universities and so feeds the lamp of learning.”

To the extent that Menzies was reporting how generations of class inequalities had split the population into haves and have-nots, his statements were an indictment of capitalist exploitation.  However, for Menzies, they were  policy prescriptions intended to keep things this way.

This class prejudice is what Pyne alludes to when he says that posh schools are in the Liberal Party DNA. The class war continues in the inequitable funding of classrooms. The tax-funded non-government sector confirming that unto those who have shall be given.

Part II – ‘Follow the money’ will be posted next week.